In Cast Lead, some 5,300 Palestinians were injured. This time around, the number is almost twice that – with no end in sight.

Hebron-born oncologist Haitham Al Amleh had never seen Gaza. Like most Palestinians from the West Bank, he had been barred from traveling here by an Israeli-imposed permit system that has made movement between the West Bank and this teeming strip all-but-impossible for Palestinians.

On Friday, 30-year-old Al Amleh entered Gaza for the first time with a delegation of 30 West Bank and Jerusalem-based doctors. Denied entry via the Israeli-controlled Erez crossing, they travelled to Egypt and entered through Rafah, where they had to wait out several hours of Israeli airstrikes which also stranded dozens of Palestinian families attempting to exit the strip.

“When we arrived to Al Shifa, there was only one oncologist tending to all the cancer cases,” says Al Amleh, whose delegation is hunkered down at the facility along with other staff, long-term patients, and hundreds of displaced residents from Gaza’s eastern border with Israel. 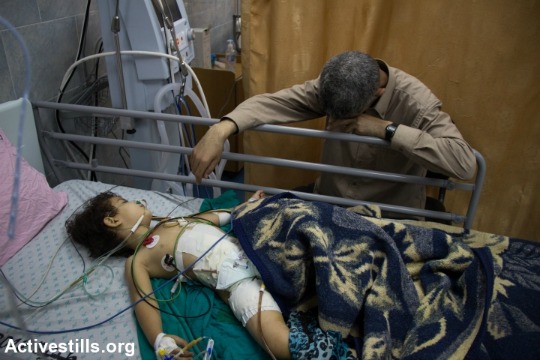 A Palestinian man watches on as a child breathes through a medical ventilator (photo: Activestills.org)

Al Amleh points out that in addition to the strain Gaza’s medical facilities face from a now month-long Israeli military operation, doctors are struggling to cope with complicated medical conditions, such as cancer, that require specialized care.

On Sunday alone, Al Amleh estimates that he saw close to 100 patients. “In many cases,” he says, “we lack the proper equipment and medicines to treat them” – a reality that the United Nations Office for the Coordination of Humanitarian Affairs has traced to the eight-year Israeli siege. He adds that the most dangerous cases are awaiting transfer to specialized facilities outside Gaza, including Jerusalem’s Augusta Victoria Hospital, where Al Amleh works.

But the transfers require Israel’s permission, which can take too long to obtain. The Israeli military announced on July 20 that it had opened a field hospital for injured Palestinian civilians, but reporters who were invited to tour the facility on August 1 found it empty.

For those who can’t make it to specialized hospitals like Augusta Victoria, Al Shifa remains their only option. But these days, the place feels more like a frontline field hospital than a long-term care facility. Several times a day, paramedics race in through the front entrance, shuttling the wounded. Triage takes place in crowded receiving rooms, where the scene is often chaotic.

According to figures cited by Gaza’s Ministry of Health spokesperson, Ashraf al-Qidra, as of Sunday evening the number of injuries from Israeli attacks had topped 9,300, a quarter of them “critical.” In the 22-day air and ground assault known as Cast Lead, total injuries were estimated at 5,300.

Qidra points to recent reports that Israel has been using so-called DIME weapons – dense inert metal explosives – on civilian areas, which have, in turn, led to a sharp increase in severe injuries. According to Norwegian doctor Mads Gilbert, who volunteered at Al Shifa during the current operation and Cast Lead, such weapons cause “horrendous injuries where arms and legs were cut off as though a huge ax had chopped off their limbs with a direct immense force.” The weapons, according to Palestinian human rights watchdog Al-Haq, are illegal under international humanitarian law. 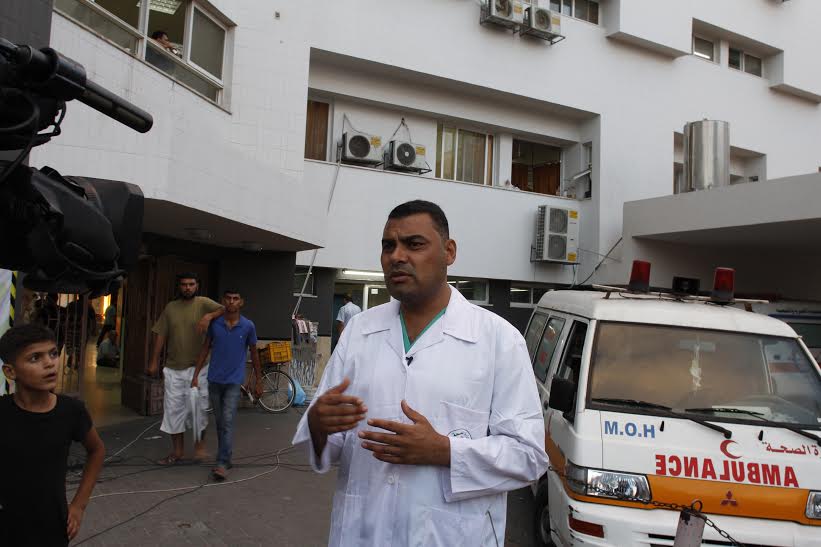 There is good reason for that, says Qidra. “Many of our patients – including severe burn victims – arrive with complicated wounds that require specialized care from teams of doctors, as well as proper equipment and medications.” According to OCHA, though, Gaza’s hospitals were running dangerously low on medicines even before Israel’s latest air and ground attacks began. And treatment options have been limited by too-few – and mostly dilapidated – equipment.

Given these limitations, says Qidra, transferring patients to hospitals outside Gaza is essential “to reduce the demand on doctors, medications, and beds.” He says that, so far, Al Shifa has managed to transfer some 250 patients to Jerusalem’s Makassed Hospital, but the ratio of patients to doctors is still too high.

To help bridge the gap, aid organizations have helped bring in volunteer doctors to support their Palestinian counterparts. Paris-based Pal-Med Europe sponsored Moroccan doctor Zouhair Lahna, who has been in Gaza for 20 days, witnessing the worst of Israel’s ground operation.

Lahna, 48, volunteered in Gaza following Cast Lead, which began on December 27, 2008. He says the situation now is more difficult, with many of the injured suffering severe shrapnel wounds from tank shelling along Gaza’s eastern border. That, in part helps to explain the much higher numbers of wounded.

Another reason, says Lahna, is geography. He points to other conflict zones, like Afghanistan, where he’s volunteered with the French-based aid group Medecins Sans Frontieres. The difference here, he says, is that “Afghanistan, for example, has mountains where people can hide. In Gaza, there is nowhere to hide.” 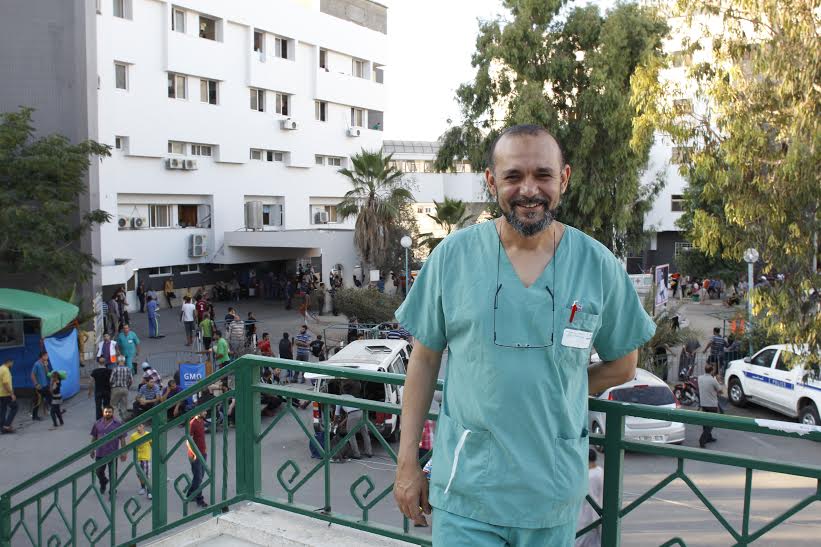 When I asked him for a prognosis of what comes next – once the bombing stops – he paused, peered at a row of ambulances on the driveway below, and told me about Ru’a. The six-year-old girl, he recounted, had been rushed in from Shejaiya last week when the shelling there was fiercest. She had “multiple, severe shrapnel wounds,” and Lahna was convinced she wouldn’t make it.

“We operated on her for four or five hours,” he said, but her odds were slim-to-none. When she later fought her way to a stable condition and survived, he and his colleagues coined a phrase – “the miracle of Ru’a.”

“I don’t know how life goes on after all of this,” says Lahna. “But in Gaza, people always find a way.” 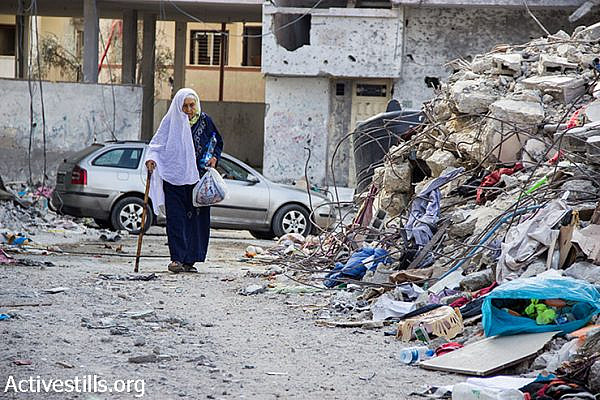 Photos of the week: Gazans search for normalcy among the ruins
What does life look like in Gaza after both the Israeli army and the media leave? Photos and Text: Basel Yazouri/Activestills.org People in Gaza are lost and uncertain. They cannot fathom what happened to them, and they cannot predict what might happen in the few next days. People whose houses were destroyed are living in…
By Activestills August 15, 2014 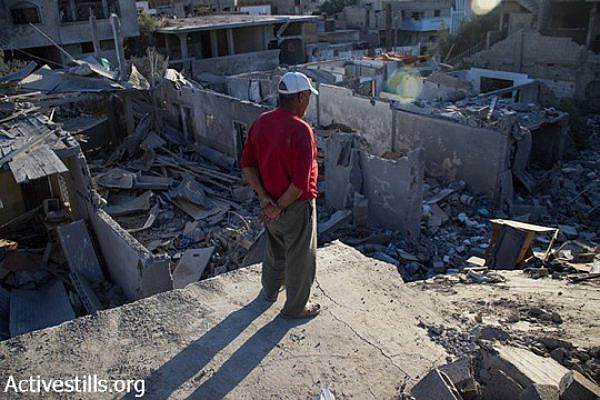