Hundreds of Palestinian families have sought cover in Gaza’s Al Shifa hospital, one of the last remaining shelters that has been spared Israeli bombardment.

GAZA CITY – In the early morning of July 19th, Rafeeq Ibrahim and his wife grabbed their four daughters and made a run for it. Their neighborhood in Shejaiya, along Gaza’s eastern border, was taking heavy artillery fire from nearby Israeli tanks. With no way to fight, their only option was flight. But what they saw next froze them in their tracks.

“As soon as we ran out the door, we saw our neighbor’s son, lying lifeless on the street,” said 47-year-old Ibrahim. “We were so stunned that we couldn’t move.” 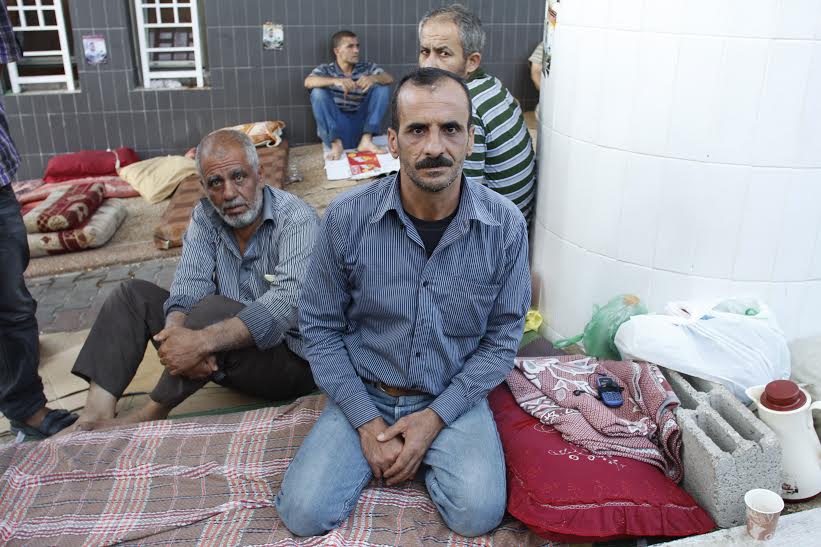 46-year-old Rafeeq Ibrahim hasn’t returned to his home since fleeing Israeli shelling on July 17. He, his wife, and four daughters live on blankets outside the Shifa Hospital emergency room. (photo: Samer Badawi)

And then the next shell hit. Running behind other families in the dark, they had no idea where to go. They just knew it had to be some place safe.

That place was Gaza City’s Al Shifa Hospital, which so far in this “war” – a word Ibrahim used – has been spared the kind of attacks visited upon other shelters, including UN-run schools. When I visited Ibrahim’s family there on Saturday, he had been there 12 days and had no intention of leaving. “This place is the best chance we have to survive,” he said.

One glance at the grounds of this overwhelmed facility backs him up. Everywhere you look — on sidewalks, patches of grass, in hallways — are entire families, spread out on blankets and foam mattresses. Some have built makeshift tents out of sheets or cardboard boxes. Others are camped fully exposed to the elements.

These are the lucky ones, Ibrahim tells me. More than 20 percent of Gaza’s 1.8 million people have been forcibly displaced from their homes over the last three weeks, since Israel’s ground offensive began. More than 280,000 of those are in UN schools. The rest squat where they can or squeeze in with extended family. 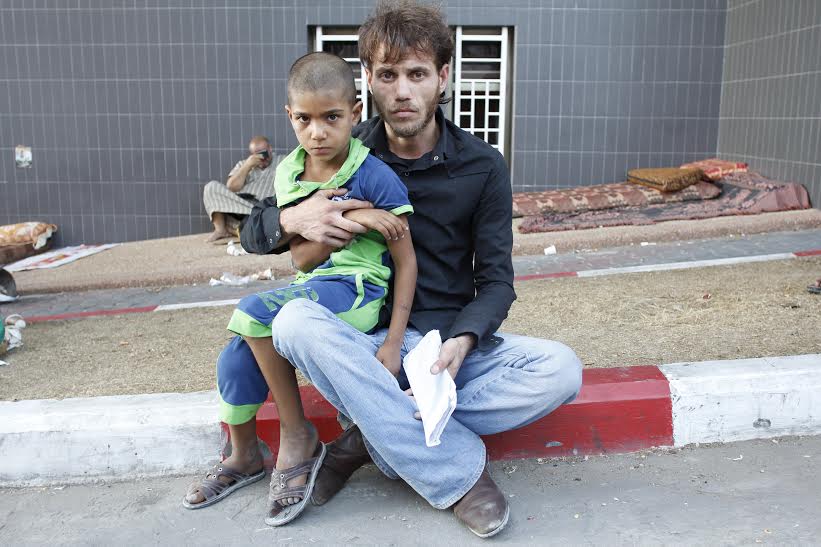 At Al Shifa, they have literally been pushed to the sea. Ibrahim gestures toward the Mediterranean, which is meters away, and offers me coffee. When I ask him what he was doing before this all started, he tells me he’s been unemployed for eight years, since Israel’s siege of this 25-mile-long strip began. He’s relied on food aid and the graciousness of neighbors, but now his neighbors are no better off.

As we speak, a young man with jaundiced skin approaches and begs Ibrahim for money. He tells us he hasn’t been able to support his kids since fleeing his own tragedy in Gaza City’s Saftawi neighborhood, where an Israeli attack made his family’s home uninhabitable.

Such are the horrors of Gaza today. Each time you think it can’t get any worse, you meet someone whose misery one-ups the last. A few meters away from the Ibrahim’s encampment, I meet Sabah Abed Qtati, the 52-year-old matriarch of her family of six children. Her husband works in Dubai and has no way of returning or sending money. So she has put down mattresses for her and her children in a hallway — just outside the hospital’s morgue. 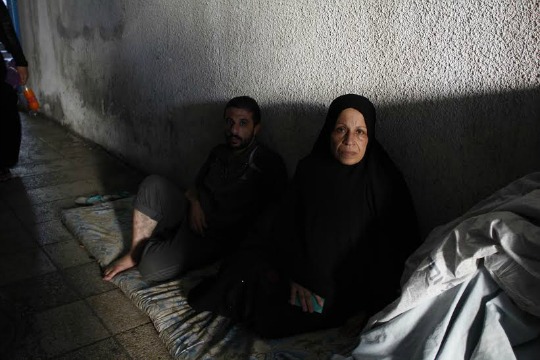 52-year-old Sabah Qtati (r) fled fighting in Gaza’s Zeitoun neighborhood 17 days ago. She now lives in a hallway of Shifa hospital, next to the morgue. (photo: Samer Badawi)

Qtati fled Zeitoun, the Gaza neighborhood that suffered horrific casualties during Operation Cast Lead, which began in December 2008. Her home was hit then, too, but not like this. This time, it’s leveled. She tried to survey the damage on Friday, when the ceasefire was announced. But before they could get there, the fighting resumed, and she “lived the nightmare all over again.”

That kind of shell-shocked logic was everywhere at Al Shifa today. The families don’t know when they’ll go back, if ever. For now, all they can do is be thankful that they and their relatives aren’t in one of the ambulances that come screaming onto these grounds several times a day, everyday.

“I don’t know how my children will ever live under a roof again,” Ibrahim says. “They’re too scared.”

Related:
Dispatch from Gaza: The bloody devolution of a ‘ceasefire’
Blaming Palestinians for their own deaths
PHOTOS: Gazans recover belongings, bodies during short-lived ceasefire