Two separate protests were held Saturday night in Tel Aviv, in a bizarre drama that split the ritual Saturday evening demonstrations into two ragged parts, with each group claiming to represent the true social justice movement. Both struggled to generate their own energy as if the other didn’t exist, though one city block alone separated the two events. At one point members of one demonstration burst into the other, staging a counter-protest. The attendees’ attention was clearly divided between addressing the range of policy injustices, and each other.

One demonstration had no clear leader; it began at Habima Square, and proceeded up Ibn Gavirol street to the government compound near the entrance to the Ayalon highway. This was clearly the angrier, more ragtag group that was unafraid to express openly politicized thoughts on numerous hand-made signs. Representatives of the largely-Arab workers’ party Da’am waved slogans calling to end the occupation, while others sought to recruit support for an upcoming demonstration against bombing Iran. A creative sort of installation-demonstration had protesters holding up huge papier-mâché matches. One of the matches was black and burnt-looking, symbolizing Moshe Silman, who self-immolated and died of his wounds a few weeks ago. People raged against economic hardship and tycoons through competing megaphones, blew whistles and beat drums.

The other demonstration, held at the Tel Aviv Museum, was far more groomed. This one had a strong institutional presence – the former student leader Itzik Shmuli was prominent along with Stav Shaffir, activists from the Meretz party waved signs, and a large banner advertising Yair Lapid’s new party was draped prominently. There was a clear focus related to the demand to draft the ultra-Orthodox: “Sharing the burden,” which has become a euphemism for a militaristic sort of call for unity around serving in the IDF. 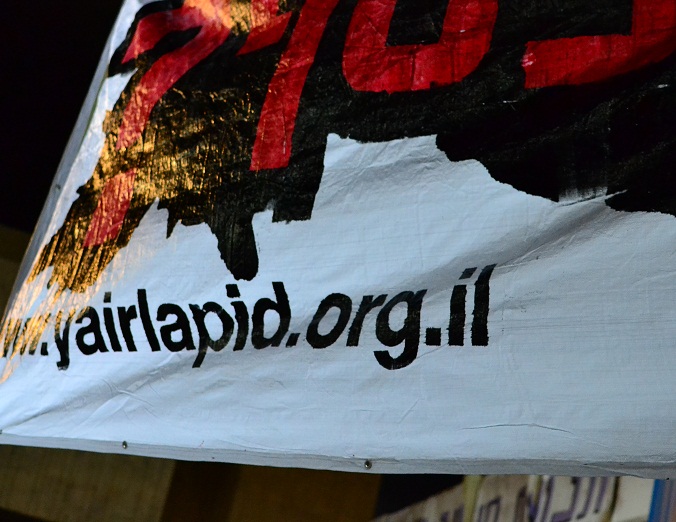 At the museum plaza, people stood in an orderly grouping. Comfortable funding was on display, with printed signs neatly stacked for distribution. Oversized video screens beamed the speakers back to the crowd as if there were millions, while amplified sound and floodlights strained to give the impression of a rock concert. 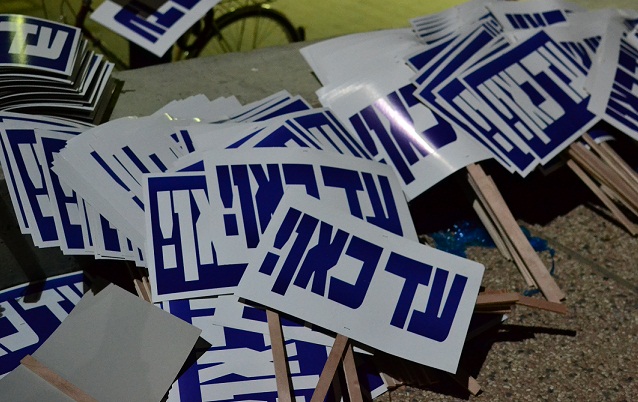 In reality, both demos numbered a similar few thousand. It was notably easy to slide through the museum crowd, compared to the compressed-flesh factor of last summer’s events in the same spot. The other demonstration was unruly, unsure of whether to maintain the separation or join forces – like good lefties, the match-marchers paused at a major junction to hold a conference about which way to go (they ultimately maintained the separation).

The situation was so confusing that would-be protesters weren’t sure where to go. Some, even a few journalists, could be seen wandering around from one to the other, confused about which one represented the one they intended to join. Other protesters were deeply disappointed in the decision of last summer’s leaders to choose one side or the other. A demure-looking Shaffir threw her J14 cred behind the “institutionalized” demo at the museum.  Yigal Rambam, an early leader of last year’s protests, ran about nearby, feverishly goading on the counter-demonstration at the margins of the museum. I didn’t see Dafni Leef anywhere. 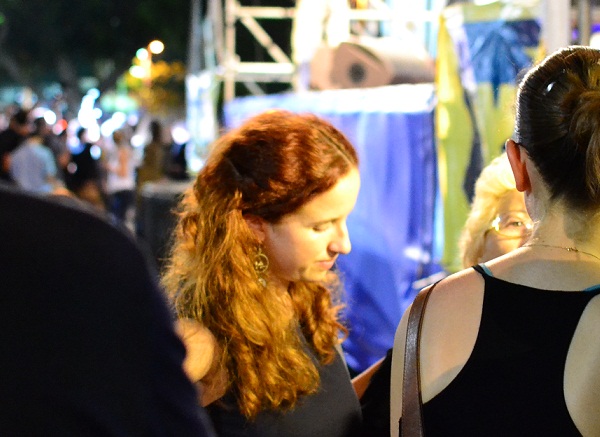 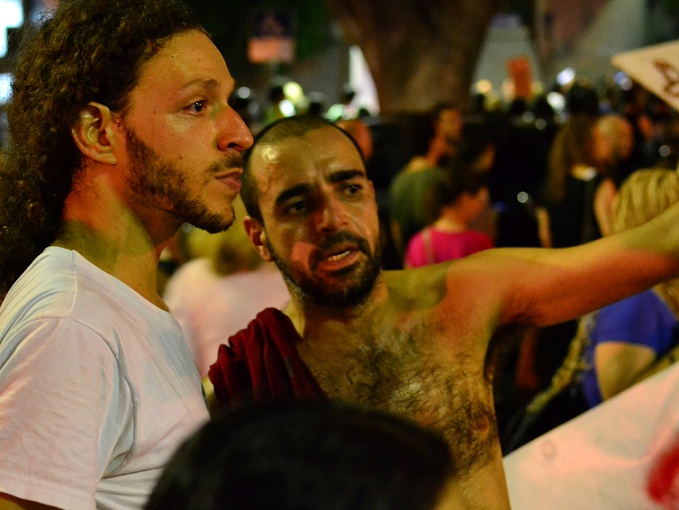 In both, demonstrators ridiculed the now-familiar sight of uniformed regular police, riot police and their favorite, the “hidden,” or rather lazily-disguised security figures. These burly guys mill about the crowd dressed as protesters, but with wires in their ears and tiny video cameras in their hands. Late in the evening, one of these got into a scuffle with the marching, leaderless protesters who had by then camped out in front of the government compound. There is little agreement about who started what. But it ended with pepper spray, and a coughing cop caught fleeing the scene with handcuffs and walkie-talkie sticking out of his putative revolutionary t-shirt.

In truth, both demonstrations failed to find a unifying theme geared at deep, substantive change. Perhaps demonstrations have run their course; perhaps the protest needs to move off the streets and into more bold forms of civic action. The anger is still real, but the cries are hollow: The master slogan printed on all those well-funded signs at the museum said simply: “Ad Kan” – roughly: “It stops here!” The best thing on offer from the more subversive march was an irritatingly faux-provocative sign in English saying “I can’t believe I’m still f-king protesting this sh-t.” (Censorship mine)