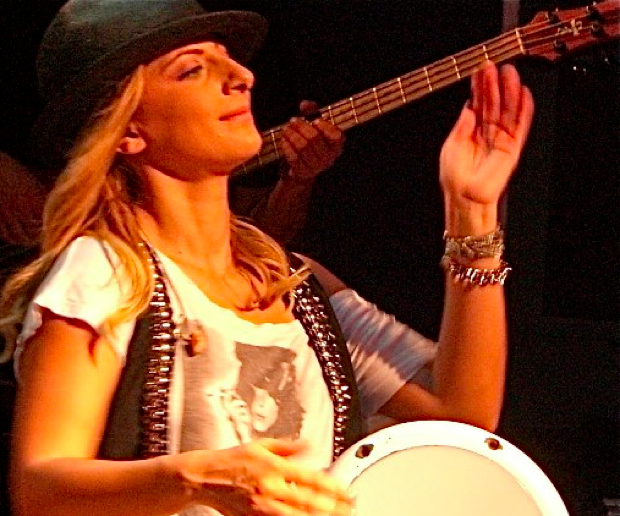 Sarit Hadad, an Israeli pop singer of Mizrachi extraction, just released a new single. The song, actually a cover of a Lebanse pop hit of the 1970s, is called “Do You Love Me” and it seems that the answer is, “Some of us do, but a lot of us really, really don’t.” For every fan who praises the song, there is someone who says it’s awful for one or all of the following reasons: it sounds Arab; it sounds Mizrachi; it’s a pathetic rip-off of an old Lebanese pop song and what’s wrong with Hebrew music, anyhow; and, Sarit Hadad is a frecha* who couldn’t sing her way out of a box.

Here she is, performing the song on television.

“It’s a huge hit, and one thing is for sure: it won’t be possible to avoid ‘Do You Love Me.’ There’s a reason it was released at the height of the wedding season: if there’s one thing you can count on, it’s that the number of times this song is played at private parties over the summer will lock Hadad in as one of the highest-earning singers in this country. “

This is what some of the naysayers have to say in the talkbacks:

#54. Israel has become an Arab state

All that’s left is for Ahmed Tibi to become prime minister and Sheikh Raed Salah to be the Chief of Staff. At the parade to celebrate the revolution, Sarit Hadad will sing her Arab song to them.

#51. Now the Mizrachi population will sing this song and think it knows English.

And then there’s this one, which is interesting for what it doesn’t say about how Arabs are regarded in Israel:

It’s time to come out and say it: Israeli Mizrachi music is really Arab music. And “Arab” is not an insult, heaven forbid! It’s just a nationality that is characterized by a language, a culture and an easily identifiable taste in music. Therefore, Sarit Hadad is an Arab singer who sings in Hebrew. Sababa.

These days, Mizrachi music is often called ‘Mediterranean’ (In Hebrew, Yam Tichonit).  It’s mostly ripped off from old Greek songs, with the lyrics translated into Hebrew and sung in a Mizrachi accent (with a glottal ‘ayin’ and an aspirated ‘het’). Quite a few Mizrachi singers, like Eyal Golan, have had crossover pop hits in the Mediterranean style, but they really don’t sound at all like the pop music you hear on the radio in Lebanon, Syria or Jordan.

Back in the 1980s, when I moved to Israel for the first time, Mizrachi music was very Arab. For years the Israel Broadcast Authority refused to play Mizrachi pop on the radio; instead, fans bought low-quality cassette recordings that were sold cheaply at makeshift stands around the central bus station. This started to change in the 1980s, when the IBA introduced Mizrachi music programs to the radio (and sometimes to television), thus bringing singers like Haim Moshe and Zohar Argov to a wider audience. Ami Kaufman wrote a post about his memory of belting out Haim Moshe’s 1983 hit song, the Arabic-language hit ‘Linda, Linda,’ while hanging out with friends in the Carmel Forest. Reading that post reminded me vividly of the first time I sang that song aloud.

‘Twas the summer of ’84. I was studying Hebrew at the university during the day; by night I waited tables with supreme ineptitude at a restaurant that was owned by a couple of newly immigrated American Jews who lived in a West Bank settlement. They were bearded, covered their heads with enormous crocheted skullcaps and had pistols stuck in their belts at all times. The Palestinian guys who worked in the kitchen often corrected their Hebrew.

At night, after we’d cleaned up and closed the place, the owners would drive us all home in their van. First they’d drop off the Palestinians in various East Jerusalem neighbourhoods, and then they’d take the student workers (like me) back to our dormitories on Mt. Scopus. As we sat squashed shoulder-to-shoulder in the back seat of the van, the Palestinian workers called out to their employer, “Yaakov, put on some Haim Moshe!” Surprisingly eager to oblige, Yaakov would shove a grubby cassette into the player and turn up the volume. Thus we drove through the badly-lit streets of East Jerusalem, bumping over the potholes and swerving to avoid stray cats as we belted out the Arabic lyrics to the Israeli smash-hit single, “Linda, Linda.” According to Haim Moshe’s Wikipedia entry, there were rumours of Linda, Linda being a hit in Syria that same summer.

The original version of “Do You Love Me” was composed and performed in 1978 by the Bendaly Family, who seem to be a Lebanese version of the Partridge Family. Whereas Hadad sings her cover in Hebrew and English, the Bendalys sing theirs in Arabic and English.

I discovered the whole controversy over Hadad’s cover of “Do You Love Me” via this essay on HaOkets (The Sting), an Israeli group blog. The author of the piece, Maya Wallenstein, summarizes the controversy and puts it into the context of an Israeli society that is still dominated by Ashkenazi culture and characterized by dislike, suspicion and ignorance of both Mizrachi and Arab culture.

Here’s a translation of the last two paragraphs of Wallenstein’s piece:

Around the same time that Hadad’s single was released, a charming clip for a song by a Lebanese group called Mashrou’ Leila was circulating around the social media world of the Israeli left. The popularization of the clip amongst Israeli leftists was of course an act of opposition to Israel’s aggressive attitude toward its northern neighbour, and a subversive message of support for peace and reconciliation between the two states. The song is pleasant listening; perhaps too pleasant in this context. The melody is completely western, the substance is western (young people, disappointment in love, highways) and lighthearted. It’s “Mizrachi-ness” is expressed only in the octave-scaling violins.

There is something very easy to digest about this Lebanese song, which is actually very “Paris.” In that sense Hadad’s song is more subversive, because playing it makes people a bit uncomfortable; it is irritating to the ear, it causes a headache – all the things that Sabras (native-born Israelis) feel when they hear the sound of music that is “too Arab” on their radio.

I’m a bit puzzled by the use of ‘sabra’ and ‘Ashkenazi’ as interchangeable terms, given that the bulk of Mizrachim immigrated to Israel in the 1950s and now have native-born grandchildren. And I’m a bit surprised at Ms. Wallenstein’s surprise at discovering that Lebanese pop music is influenced by Europe in our globalized world. And, actually, the first person in Israel to post the Mashrou’ Leila clip on Facebook was a foreign correspondent based in Jerusalem who has family connections in the Middle East and friends in Beirut. She has a lot of Israeli Facebook friends – mostly journalists – and they (we) liked the clip and shared it simply because it’s good music and the clip is quirky and hip. It seems kind of sad that sharing a song about love is described as a subversive act – even if subversive is meant in a positive sense. But then again, this is a region where states nearly go to war over the pruning of a tree.