As long as Arabs are the ones being murdered, the State of Israel has no problem with illegally-owned weapons. Only when Jews are harmed does this become a national issue. And then they wonder why we aren’t loyal. 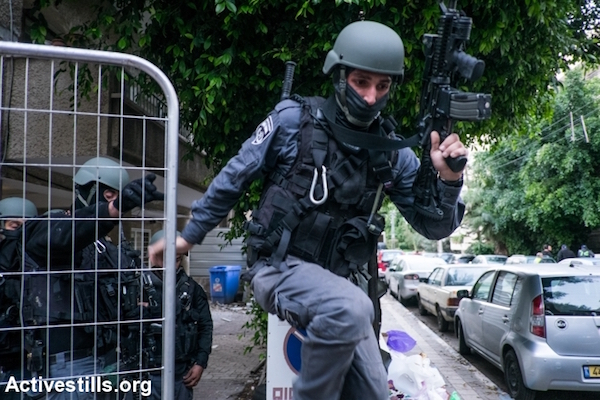 I came home at around 9 p.m. and pressed the button for the elevator. Without any prior notice, dozens of armed policemen jump on me at the entrance to my building. I cooperated, told them where I live, and no, I did not resist — despite the fact that the police did not present me with any arrest warrant, nor did anyone care to explain to me what this was all about.

The only thing I understood was that they were looking for the Abu Shahadeh family, although they couldn’t do the bare minimum of finding out that our entire building is comprised of members of the family. Meanwhile, they pointed their weapons on members of the family while patting us down front of young children, all while ignoring our requests to put down the weapons and let the women of the family get dressed. Needless to say, we cooperated fully.

This was probably too big a request for the police. My attempt to explain to them that they could search the house as long as they respected my mother and sister did little to help. In a matter of seconds I found myself on the ground, surrounded by officers. They held me down with their knees on my head; I felt helpless and begged them to let me breathe. After that I was forced to sit on the wall while my hands were cuffed behind my back. Within a matter of seconds I realized my uncles were also first arrested in the 1950s without any prior criminal history. I was made to sit on the street, humiliated in front of all the neighbors, begging the policeman to stop pressing my head down, that I wasn’t going anywhere.

But who am I to complain? The hunting season of young Arabs in their 20s has begun, and the preferred location is Tel Aviv. These days, if you’re a dark-skinned Arab man with older features — Tel Aviv and Jaffa are not the place for you. Yes, there was an attack last Friday. The attacker has yet to be caught, and there is no solid evidence that prove his true intentions (one of his victims was an Arab taxi driver). But who ever said the police need a reason to humiliate Arab citizens? After all, the prime minister himself incited and preached about the lack of law enforcement in Arab society, as if we simply cannot obey the law!

How would we do so in the first place? Arab mayors have for years complained and begged the state to implement the law through statutory plans that would allow people to build on their own land. Years that we have complained of a lack of policing, because we understand that this only harms our community. Over a million people live as if the police don’t exist. This is not the wild imagination of Arab leaders — these are the conclusion of the Orr Committee, which described just how Israeli Police view Arab society as the enemy.

Weapons in the Arab community? I myself held one of my best friends as he lay bleeding, after that same kind of illegally-owned weapon that Netanyahu spoke about blew his brains out. Years that we have been begging the state to collect the weapons that hurt us and especially the young. In Jaffa alone, dozens of young people have lost their lives. I’m sorry that the murdered aren’t named Avi or Lior, but we must say it clearly: as long as the murdered are Arab, the State of Israel has no problem with illegally-owned weapons. Only when Jews are harmed does this become a national issue.

And then came Netanyahu’s speech. It was incredible how the same person who regularly incites against Arab society, who withholds basic rights from Arab society, is now rebuking us. What the hell do people like him know about how we feel? About life in a state that discriminates against us in every possible realm? And then they wonder why we aren’t loyal.