Watching an Arabic movie every Friday throughout my childhood. Nearly 30 years would pass before I discover that my grandmother and Farid al-Atrash were friends. I have no idea, it goes under my radar. And yet they are there, the words.

By Tamar Kaplansky (Translated from Hebrew by Orna Meir-Stacey)

My mother grew up in Alexandria, my father still has a Palestinian identity card. Both my grandmothers spoke Arabic – one with a K’ of Egypt, which is A’ (and this is why ba’lawa is called ba’lawa and nothing else), and one local, Galilean, Arabic. But I don’t know Arabic.

Watching an Arabic movie every Friday throughout my childhood. Nearly 30 years would pass before I discover that my grandmother and Farid al-Atrash were friends. I have no idea, it goes under my radar. Don’t know Arabic.

I also did not learn Arabic, except for one year in fifth grade before we went to France, with Shoshi, the teacher. I do remember to this day all the songs from Jarak (k)aribak, and the song I was supposed to sing on the day the inspector for Arabic was to arrive for a visit (and didn’t sing in the end. Long story, prepare the hankies) – but Arabic I don’t know.

I mean, except after a few days in the Sinai, when suddenly I discover that I can compose sentences. Slowly, admittedly, and a little crooked, but sentences. Or when the alte zachen[1] comes, one Aref from Abu Tur, and we are having a whole conversation. Eight children, the youngest one year old. “All the leaders are laughing at us,” he says to me, drinking his tea, surprised that Jews, too, have sage.

Or when I hear Umm Kulthum for the first time, and discover that something about it is totally clear to me. Half a sentence here, two words there. And unlike other languages which I don’t know, I learn all of Inta Omri by heart without meaning to. So that some time later, in the Sinai, Ibrahim, who always loses in backgammon, is surprised to hear me singing the lyrics with the tape, and translates for me. Khudni Lehananak, khudni, anil wugud wab’eedni. Hananak, he explains in broken Hebrew, is something sweet. He brings his hands embracing an imaginary baby close to his body, tells me that this is also where a mother puts her child. Ah, bosom, cheik, I say. Kheik? he repeats after me, and my chet is a very clear khaf in his mouth. Yes, I confirm, and then emphasize the chet[2]: cheik – explaining that it is actually spelled like this, but it’s barely pronounced this way today. (Every day, at sunset, Ibrahim calls Allahu Akbar, heard throughout the beach, religiously praying five times a day. Trying desperately to recover from loving men).

Don’t know Arabic but I do. And yet don’t. 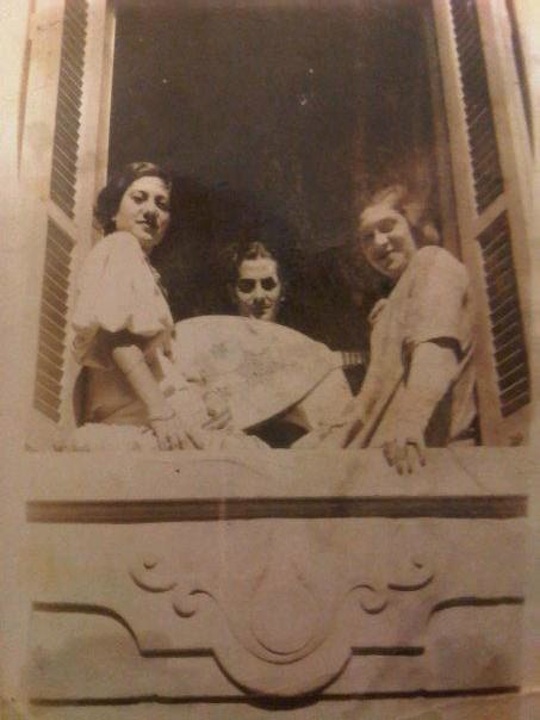 From the left: My grandmother Becky Memran (formerly Rouvio), with Farid al-Atrash, and her sister Léonie.  Alexandria, sometime in the mid-late thirties.

Don’t know even though Arabic has always been there. All my life. The most vivid word from my childhood is khaliha, which dad says to mom. Leave her, it’s alright. Shoof, Grandma Sarah points at me with laughing eyes. She says about my Granddad Zalmen, who was born on the Volga, ‘jozy’ (but I know it should be ‘gozy’ – inadvertently carrying the Egyptian arrogance, the deep conviction that only ‘our’ Arabic is correct). Mark, shouts my other grandmother from the kitchen. Na’aaaam, replies my grandfather, already exhausted from the expected speech, which indeed follows. And me, on the living room sofa in Paris, watching Goldorak on television, and mindlessly collecting single words. Sit and go and come and don’t want to and please tell me and now and keep safe and God forbid. Khali-balek ala nafsek, ya sater ya Rab. Piles of single words that only in the Sinai, many years later, I learn some of were Egyptian-Egyptian. Look how she walks, this one, like some he’ah, I say and Tariq laughs, how do you know how to say that; stares at me, surprised, when I say to somebody returning from the shower, na’iman.

And all the sweet words that my grandmother says. Ya rohi enti, ya asal, ya omri, first to me and then to my children. Ya katkut, ganenteni.

Don’t know Arabic, but three weeks ago in Al Araqib two men are whispering and then one says to me, in Arabic: A question, may I? And as I approach: Btehki Arabi? No, I answer, aware of the absurdity and yet not lying. So so, a little bit, I add in the Arabic which I don’t know. But I heard you speaking words here, he says in Hebrew, you don’t have any accent. Yes, I nod, words I have. I don’t have sentences. And then in Arabic, my mother is from Egypt, from Skandria. W’abuki? My father is from here, in Hebrew. W’enti, min wen? Me, I feel like saying, I’m from another story[3]; do you know the Sixteenth Lamb? But I tame the associative weakness and don’t say it. These people have had their houses demolished more than 40 times and they are sleeping in the ancient cemetery site. Will you really start explaining the wandering and where you learned to speak? I am from all sorts, I finally say, half-apologetically.

And he smiles, bending down to Yotam, in Hebrew, want to get on the horse? Inside my head somebody knows: Hessan. Come sweetie, I will pick you up. Ta’al, habbibi, he puts him up on the saddle. And the boy is frightened at first and then laughs.

[1]Peddler; from Yiddish,, literally meaning “old objects”. Often they are of Arab origin.
[2]Chet and Chaf are two different Hebrew consonants with equivalents in Arabic. While they sound completely different in Arabic and in Mizrahi Hebrew pronunciation, Ashkenazi Hebrew pronunciation does not differentiate them. Therefore, they are powerful cultural signifiers.
[3]Reference to the Story of the Green Man from the Sixteenth Lamb by Jonathan Geffen, a popular Israeli children book and album.

Tamar Kaplansky is an editor, translator and writer, and sometimes a singer. This post was first published in Hebrew on Haokets.