Aleppo, your stories will come back to my ears, like a child who sits on his grandmother’s knees. 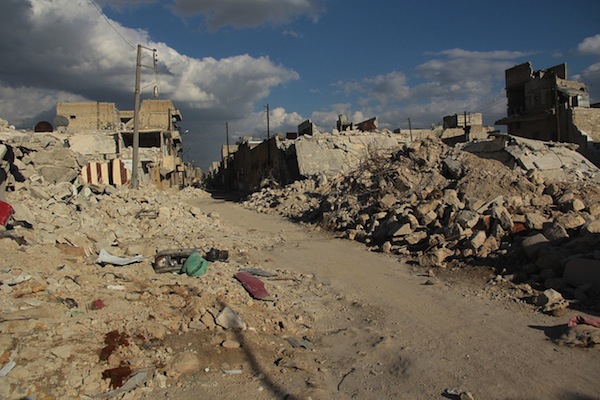 Aleppo, I, Matityaho Ibn Shifra, your old daughter, a grandson of your Arab-Jews, mourn the erasure of your city of poetry,

Aleppo, how did they forget to save your libraries?

Aleppo, was it not fireworks that lit the skies of the Arab spring? Or were the night stars shining all night long?

Aleppo, tell me who is the devil that drops explosive barrels upon your residents, and thinks that in this way — they will write his name in love,

Aleppo, will you listen to the old, weeping Iraqi who lives inside of me? Here, at the gates of our European towns, stand thousands of your sons and daughters, standing with keys to lost homes, waiting to enter.

Aleppo, rich poems will flourish in your botanic gardens; Free, we will walk among your Middle Eastern shifting sand-novel-dunes; freedom will be tattooed on our children’s hands, red words of prayer will spread in the wind,

Aleppo, torn poetry books fly in the wind; your children’s memory squashed beneath the rubble,

Aleppo, the few who read your heart’s beating poems fighting with those who don’t know shit about the little girl who dances while she writes a love letter to her mom,

Aleppo, your daughters, are the new Jews, who are exiled between the libraries of the world, and inside their headphones you can hear the compassionate womb of the Oud,

Aleppo, we will not fight with weapons that lead to victory. Nope. We will put our hopes in the gentle candle wax and surrender to mountains of words where the sweet snow melts into rivers; where love springs out,

Aleppo, tell us again how we can raise neighborhoods of believers and atheists; among the alters who scattered our souls,

Aleppo, your stories will come back to my ears, like a child who sits on his grandmother’s knees.

Mati Shemoelof is an Israeli author, poet, editor, journalist and activist based in Berlin. Visit his website here.