It takes especially opaque blinders, or immense willpower and ignorance to visit one of the most egregious scenes of military occupation and settler violence without noticing the injustice taking place before your eyes. 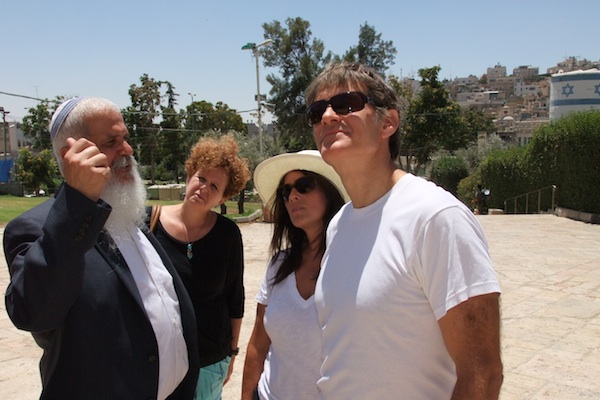 Dr. Mehmet Oz with his wife and a Jewish settler in Hebron, July 29, 2013. Behind them are Palestinian homes. (Photo: This World: The Values Network)

Even the world’s most learned minds can walk through life with blinders on.

One of the world’s most well-known physicians, Dr. Mehmet Oz, visited Hebron on Monday.

But the renowned cardiothoracic surgeon and television host did not learn about one of the most shocking and extreme iterations of military occupation and settler domination during his visit. He did not meet with local Palestinians to hear about their hardships under occupation, or even take a tour with an Israeli groups like Breaking the Silence, that try and shine light on the situation there.

No, Dr. Oz went on a tour hosted by the settler community in Hebron.

Yes, the same settler community that brought you this classic tale of coexistence:

The same settler community that maintains a shrine for mass murderer and brother in arms Baruch Goldstein and named a park for [Israeli designated] terror organization leader Meir Kahane.

These are the people with whom Dr. Oz danced with on Monday.

The Turkish-American doctor also stopped to meet Israeli soldiers stationed in Hebron – enforcers of the city’s military regime of segregation.

It’s possible they were the same soldiers who arrested a five-year-old Palestinian boy in Hebron earlier this month.

Or the ones who force Palestinians to walk in an unpaved, fenced-off dirt path, in order to keep them off of the “Jews only” street.

The pair flew from the U.S. to Israel in order to visit one of the most egregious scenes of military occupation on Sheldon Adelson’s private jet, of course.

In a video message published before alighting the Adelsonmobile, Dr. Oz explained that he’s visiting Israel in order “to understand how the symmetry of our religions dwarfs our differences.”

Did you find that symmetry in Hebron, Dr. Oz?