Druze-Arab men, unlike other Arab citizens of Israel, are subject to the same mandatory conscription as Jewish Israelis. Kamal Zidan is refusing because of his Palestinian identity. 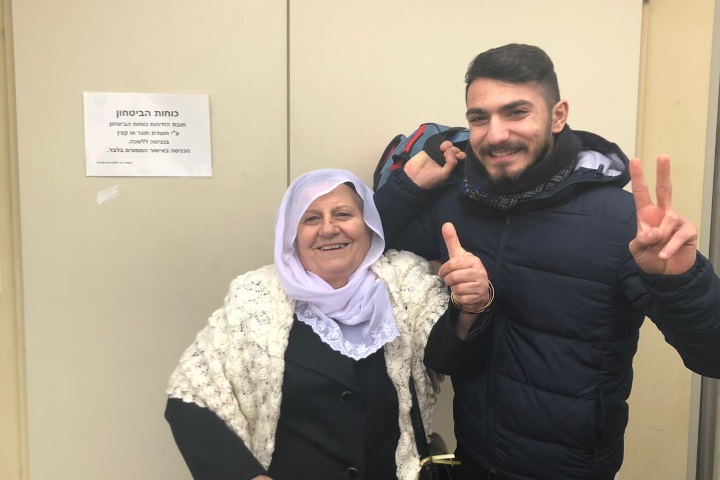 Kamal Zidan and his grandmother pose for a photo before he presented himself at the Israeli army induction base. (Courtesy of the Zidan family)

Kamal Zidan, an Arab-Druze citizen of Israel, presented himself at the Israeli army’s Tel HaShomer induction based last Sunday and declared that he refuses to be conscripted into the IDF. Zidan, whose refusal is based on his Palestinian identity, was sentenced on the spot to five days in military prison by an administrative tribunal.

Unlike Muslim and Christian Arab citizens of Israel, Druze men are subject to mandatory military conscription just like Jewish Israelis.

“The chances of getting exempt from service are not high, and he is expected to be jailed again,” said Yaman Zidan, Kamal’s lawyer and father. Other refusers have spent months in prison, sentenced to anywhere from a five to 30 days at a time.

Yaman, who has two brothers that died during their military service, is one of the founders of the Urfod Movement, which advocates for draft refusal among Druze citizens in Israel. Yaman himself refused to serve, and now, his son is following his footsteps.

During his week in military prison, Zidan says he was kept in harsh conditions, including being placed in solitary confinement. Upon his release, he was told to return to the induction base at the end of the Passover holiday next week.

“They put him in solitary confinement with surveillance cameras filming 24 hours a day, because he’s refusing all orders. He’s refusing to salute the officers and commanders that enter his cell,” said Yaman, the father.

The constant surveillance is a blatant violation of privacy, Kamal and his father said. Furthermore, Kamal described having to sleep on a bare mattress because no sheets were provided to him.

He said was allowed to bring only one book into the cell. During the day, he was forbidden from laying on the bed, he added, and the light in his cell was kept on throughout the night, which made it hard to fall asleep.

“If he lays on the bed, they go in and force him up. Once, they even took away his mattress as punishment. There was another case in which he was handcuffed for laying down. They want him to sit in the same position the whole day,” said Yaman. “There’s an element of physical and psychological pressure.”

According to his father, Kamal went on a hunger strike, in solidarity with Palestinian prisoners who were also on hunger strike last week. Even after the prisoners ended their strike, he refused to eat, in protest of his conditions, said Yaman.

“I spoke with the officer, and he said he was following protocol. I asked him to see those protocols, but he refused to show me,” Yaman said.

Last Thursday, Yaman filed a High Court petition against the Military Advocate and the State Attorney regarding his son’s conditions in prison, which he argues are harsher due to ethnic discrimination. Yaman also requested a copy of the army’s protocols regarding the type of treatment his son was subject to.

In response, the MAG said all prisoners are prohibited from lying on their beds during the day. In the same breath, the army denied that Kamal was forbidden from resting in his cell during the day.

“When they enter Kamal’s cell, they demand he place his hands behind his back. If he refuses to do so, he says, they handcuff him,” said Yaman.

According to the father, Kamal also said that various officers came into his cell in the first couple of days of his imprisonment and told him he is Druze, not Arab or Palestinian.

Kamal is basing his refusal to be drafted based on a clause that absolves Arab Druze from service based on an affinity to an Arab nationality.

“According to military law, men who are Arab Druze are defined as Druze, whereas women are defined as Arabs,” said Yaman. “Meaning, based on this law, I am a Druze son to an Arab mother! Do you get how absurd this is?”

After submitting his request for an exemption, Kamal arrived at the induction base on Sunday, where the tribunal investigated his claimed affinity.

“I think they were looking for an excuse to reject the affinity claim,” said Yaman. “If they had approved Kamal’s request for exemption based on that, it would have created a precedent.”

In 2014, the Israeli army imprisoned Druze refuser Omar Sa’ad for 150 days before ultimately releasing him from service. A year earlier, it imprisoned Jewish refuser Natan Blanc for 177 days in prison. In 2017, refuser Tamar Aloni spent 130 days in military prison before being released from service.

The soldier was tried in a disciplinary tribunal for refusing service, and was sentenced to five days of imprisonment. While serving his sentence in Prison 6, the soldier refused to follow the orders of the prison’s commanders, and was transferred to solitary confinement as a result. In contrast to the soldier’s claims, while incarcerated, the officers treated him in accordance with the law, and there is no basis to his claim that he was punished by being handcuffed. The soldier finished serving his sentence last week.