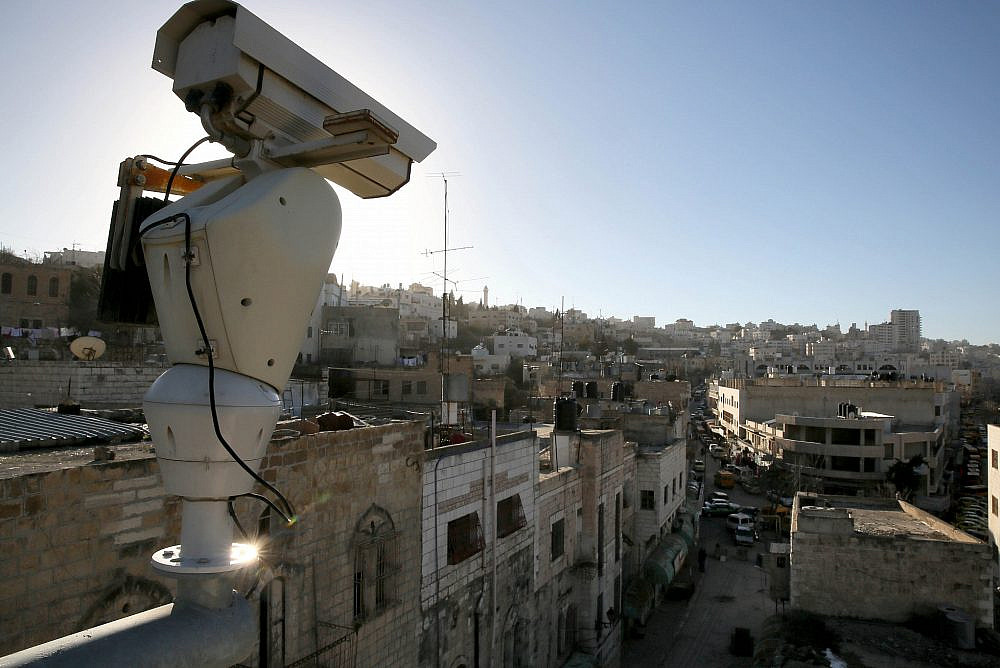 There are perhaps few stories left of the occupation whose exposure can provoke a shudder, or even a hint of self-doubt, among the Jewish-Israeli public. But if there are, the Washington Post’s investigative report on Israel’s new surveillance system in the occupied West Bank is certainly one of them.

The “Blue Wolf” database — which uses facial recognition technology banned in several countries — is the kind of policy that puts Israel in league with some of the world’s cruelest governments.

Dubbed a “Facebook for Palestinians,” the execution of this program sounds as if it were taken from a dystopian sci-fi novel. Israeli soldiers photograph random Palestinian passers-by on the streets of West Bank villages and cities, regardless of whether they are suspected of anything, and enter their details into a database that combines facial recognition with their personal records. According to the Washington Post’s report, army units even compete with one another over how many Palestinians they can photograph.

There is nothing new about Israeli soldiers turning the abuse and mistreatment of Palestinians into a game. During the Great March of Return, snipers stationed along the Gaza-Israel fence competed with one another over who could shoot more Palestinian protesters — the vast majority of whom were unarmed and posed no threat — in their knees. Such dehumanization, after all, is central to maintaining Israel’s regime of racial supremacy.

Meanwhile, the IDF Spokesperson’s contemptible response to the article almost manages to overshadow the news itself, saying with a straight face: “Routine security activities are part of the fight against terrorism and efforts to improve the quality of life for the Palestinian population in Judea and Samaria [Israel’s official name for the West Bank].”

It seems the army is so accustomed to the Israeli media’s sycophantic reception to its lies, that it has lost the ability to recognize how delusional its own reaction is, especially to one of the world’s leading newspapers. The army’s attempt to portray this reality — in which an occupying force pours massive resources into a biometric database in order to deepen its control of the local population — as a way to ” improve their quality of life” is laughable. This is all the more ludicrous given that soldiers routinely turn a blind eye, or stand idly by, when armed Israeli settlers attack Palestinians in broad daylight. 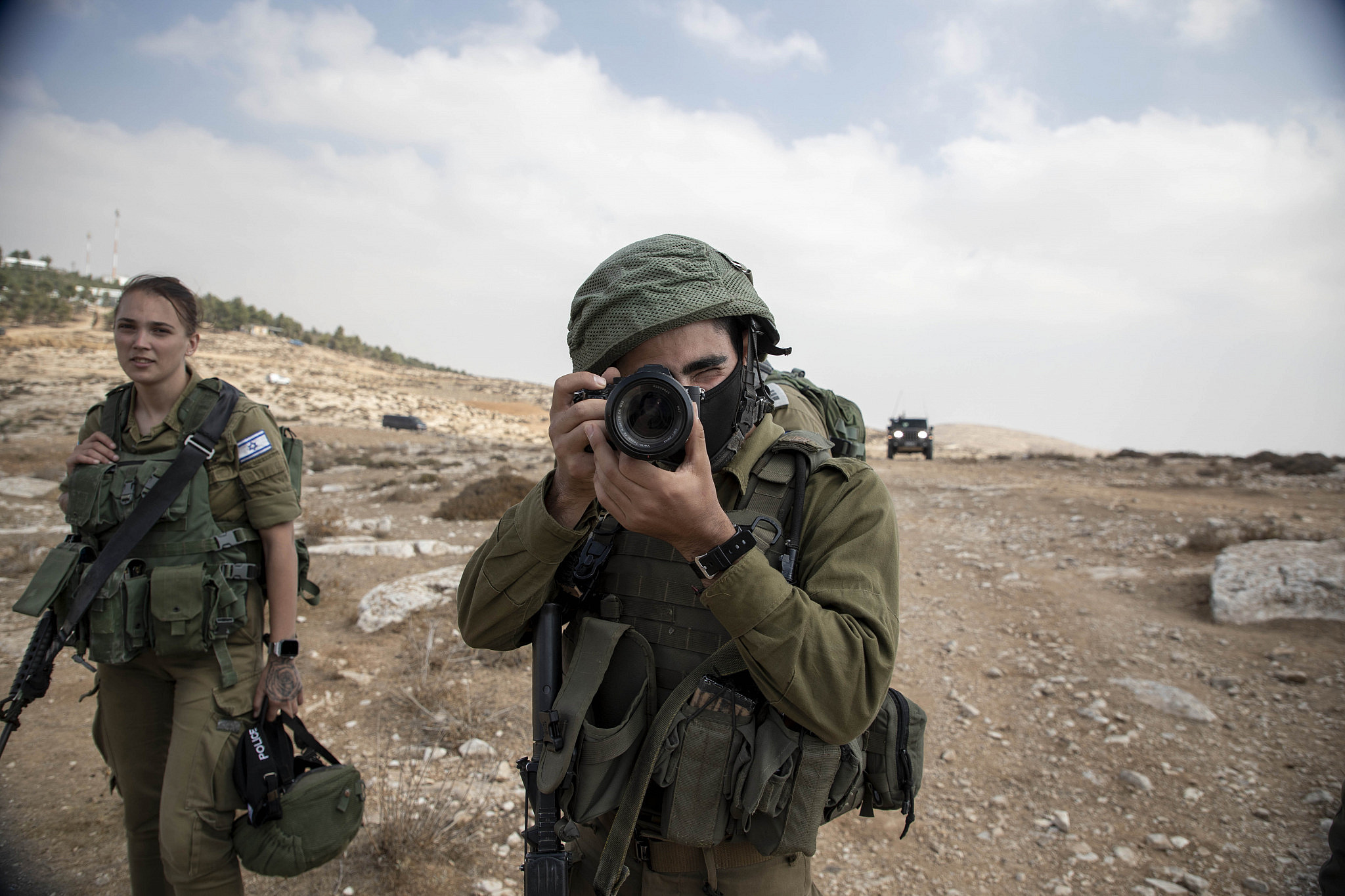 An Israeli soldier takes a photo of protesters during a solidarity visit by left-wing Israeli and international activists in the South Hebron Hills, West Bank, October 2, 2021. (Keren Manor/Activestills.org)

Where were all these glorious, preventative hi-tech measures when Jewish settlers murdered Ismail Tubasi in May? How much technological sophistication is needed to locate settlers and soldiers who have been documented abusing Palestinians? What advanced software is needed to stop the rising violence against Palestinian farmers during every olive harvest season?

Are the facial recognition cameras installed by the army in Hebron also intended to “improve the quality of life” of the city’s Palestinian residents, where they have been banned from so much as stepping on the same floor tiles as members of the superior race? Is the use of the Pegasus spyware against Palestinian human rights groups, which were declared “terrorist organizations” without a shred of serious evidence, also intended to improve the Palestinians’ quality of life?

The Israeli security establishment has always relied on the entrancing effect that the word “terrorism” has on the Israeli public, enabling the state to carry out the most barbaric and repressive practices in the name of this eternal war on terror. But this word can no longer work the same magic in the face of the truth about its policies.

In a letter republished in The Guardian and Haaretz in 2014, veterans of the vaunted Unit 8200 intelligence unit, who announced their refusal to serve in the army reserves, affirmed that the intelligence collected and stored in Israel’s military databases “harms innocents and is used for political persecution and creating separation in Palestinian society by recruiting collaborators and turning parts of Palestinian society against itself.” One of the conscientious objectors detailed at the time:

During my service I collected, among other things, intelligence about innocent people, whose only sin was that they were of interest to the Israeli security system for various reasons. If you are a homosexual who knows someone wanted, Israel will make your life miserable. An innocent person who could be blackmailed in exchange for information or to be recruited as a collaborator was a gold mine for us and for the entire Israeli intelligence community. In the training course, you actually learn and memorize different words for ‘gay’ in Arabic.

Along with deepening its control of Palestinians, the kind of technologies exposed by the Washington Post generate huge profits for Israel. As human rights attorney Eitay Mack explained after the Pegasus affair was exposed earlier this year, Israel’s sale of surveillance technologies, including to regimes that routinely violate human rights, has long been an integral part of the country’s diplomacy.

It is not for naught that some of the world’s most sordid regimes have become avid customers of Israel’s oppression technologies: they come battle-tested after being used on millions of Palestinians in the laboratory of the occupied territories. And all, of course, with the admirable aim of “improving their quality of life.”

A version of this article first appeared in Hebrew in Local Call. Read it here.