A recent New York Times article ran under the misleading headline, “West Bank Land, Empty but Full of Meaning”, referring to the E1 area where the Israeli government recently announced new settlement building in spite of international opposition. Strangely, the photo appearing in the online edition underneath that headline pictures a Bedouin man who owns land in E1. 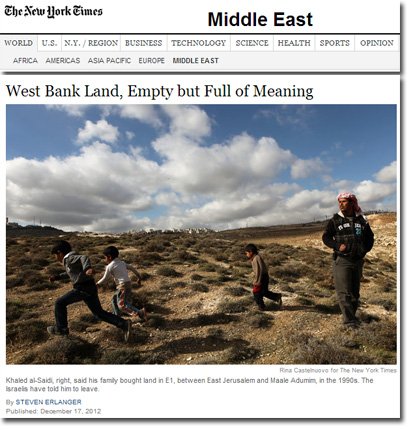 The Times headline is especially troubling for its resonance with the Israeli national myth that the land was “empty” before the Zionists came and “made the desert bloom.” Such language reinforces decades-old misconceptions to the casual reader, while the disconnect between the headline and the photo illustrates the internal contradictions of Nakba denial and Zionist mythology: there was no one here, and they all need to leave. 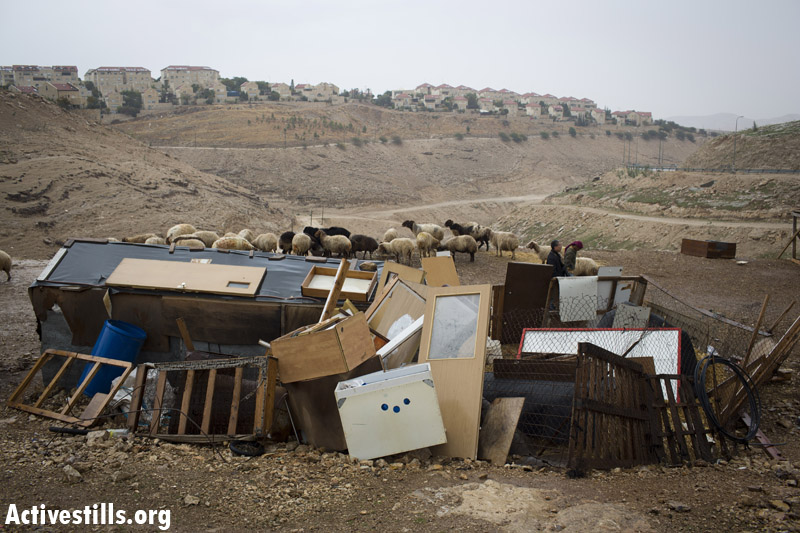 A sheep shelter constructed out of old furniture in a Bedouin camp in the E1 area, situated between Jerusalem and the Israeli West Bank settlement of Maale Adumim (background), on December 11, 2012. Israel has approved the building of 3,000 settler homes on the patch of land; a development that has been on hold for years due to pressure from the US and EU. (photo: Oren Ziv/Activestills.org)

In the interest of demonstrating that E1 is not “a land without a people” for a people planning a land grab, here are a few more images of people currently living in E1–namely, the Jahalin Bedouin. No, there are not many modern permanent structures in E1, owing partly to Bedouin culture and their relative poverty–but more specifically due to Israeli control that bars building by Palestinians and has placed demolition orders on even the most humble structures built by the area’s inhabitants. Here is Al Jazeera’s headline on the same topic: “Israel expansion threatens West Bank Bedouin.” 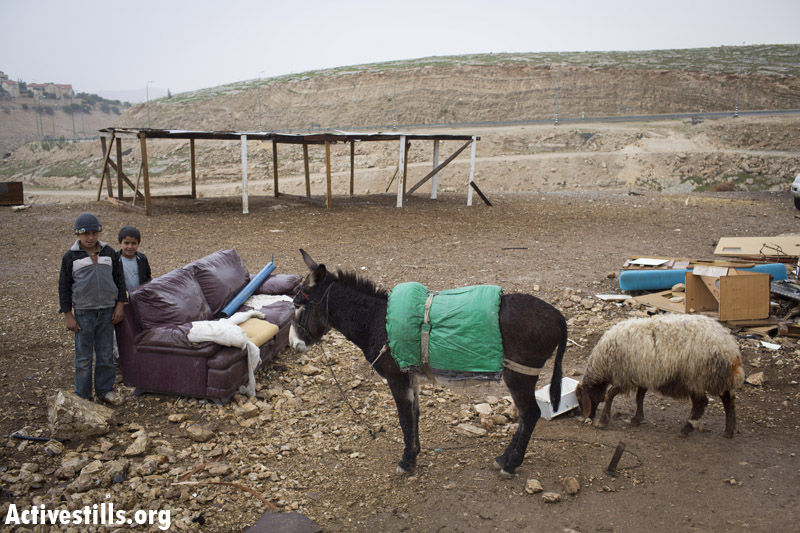 Bedouin children near their home in the E1 area, which is between Jerusalem and the Israeli West Bank settlement of Maale Adumim (background), December 11, 2012. (photo: Oren Ziv/Activestills.org)

But the latest announcements by the Israeli government aren’t even the beginning of troubles for the Bedouin in and near E1. According to Amira Hass: 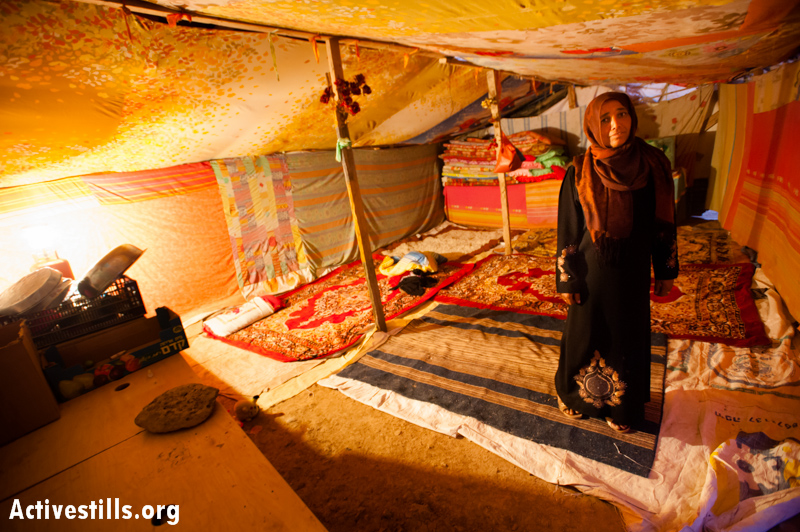 A Jahalin Bedouin woman stands inside her tent, which like all the structures in her village which are under demolition orders by Israeli authorities. (photo: Ryan Rodrick Beiler/Activestills.org)

More background on E1 and the Bedouin from Hass:

Some 80 percent of Bedouin who live on the eastern periphery of Jerusalem are registered as refugees, from families that Israel exiled at the beginning of the 1950s from Tel Arad in the Negev. Until 1967 they continued to live a traditional lifestyle, of raising and herding livestock in the West Bank and the Jordan Valley. Since the occupation of the West Bank in 1967 the areas in which the Bedouin are allowed to move and herd has been greatly reduced, as Israel has declared certain areas of the land as fire zones, and set aside other areas for settlements. Over the past twenty years, the situation of the Bedouin has gotten worse as West Bank settlements have expanded, access to Jerusalem – the main market for their produce – has been blocked, the West Bank separation barrier has been built and the, Jerusalem-Jericho road expanded.

Israel does not allow the Bedouin to building and connect to infrastructure, and does not even allow them to put up tents to match the natural growth of their population. For the expansion of Ma’ale Adumim in 1997, some 150 families from the Jihalin tribe were forced to move to an area in Abu Dis that is next to a landfill site. 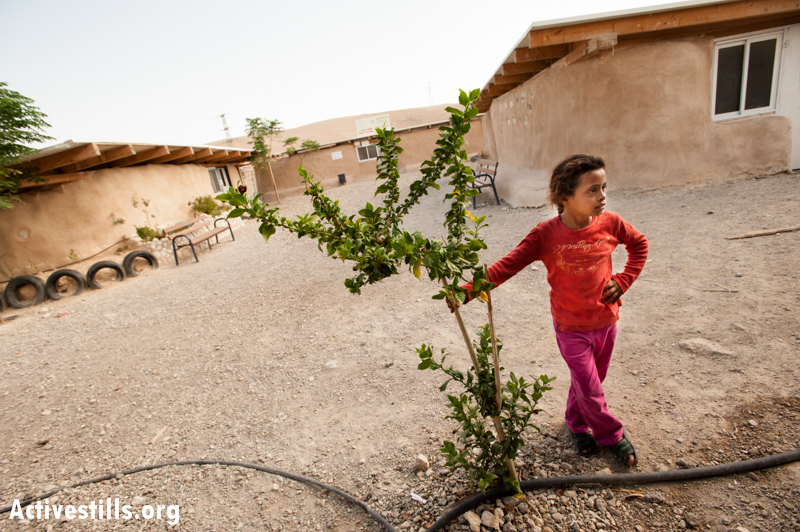 Related:
Could E1 be the trigger that sparks a new round of violence?
Resource: What is the E1 area, and why is it so important?
Following E1 decision, Israel is more isolated than ever but not likely to change course