After seven years of siege, the defense establishment has suddenly discovered that the blockade on Gaza is not helpful. It’s no coincidence, of course, that this realization comes after a war that devastated the Strip and has the Palestinians focused on reconstruction.

“Israel now admits that the almost-airtight blockade of Gaza has done more harm than good.” I am always amazed at the ease with which these sentences are written by this or that analyst. Written so nonchalantly to the point that it feels like the writer might as well just shrug and say, “Well that didn’t work, let’s try something else.”

As if that same defense establishment and those same analysts weren’t the ones who actively promoted the policy of siege for the past seven years. As if they aren’t responsible for embittering the lives of 1.8 million people. As if they didn’t kill thousands in Gaza and dozens in Israel, sowing unbelievable destruction over the course of several wars and operations, all in the name of their holy policy. As if they didn’t allow the Israeli public to become accustomed to the claim that there is no blockade, and if there is then it is Egypt, not us, who is responsible, and if it is us then it is justifiable and we owe the Palestinians absolutely nothing and why the hell do they keep shooting at us anyway. As if they didn’t present the siege as the solution to rocket fire from Gaza and to the terrible conditions of the Israeli population living around the Strip. And as if, just two months ago, they didn’t praise, justify and march to war by sending soldiers into Gaza, while condemning the left, which claimed that the blockade is neither legal, moral or helpful. 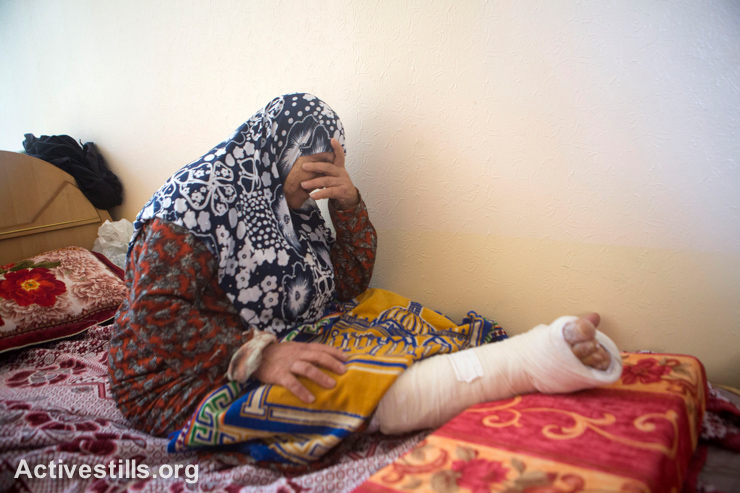 Mariam Al Nawasra, age 85, cries when recalling the attack on her family’s home during the last Israeli offensive, September 16, 2014. The attack killed four members of the family, Salah (age 24), his wife Aesha, who was 4-month pregnant, and brothers Mohammed (age 2) and Nidal (age 4).

And here comes Ron Ben-Yishai and writes the following words: “Israel now admits that the almost-airtight blockade of Gaza has done more harm than good.” And nothing. Knesset members aren’t calling to punish the defense establishment – neither for its past mistakes nor for starting to sound like a “traitor” itself, akin to an Israeli human rights organization. Websites and newspapers who identify “Israeli first” won’t denounce the author of the piece. That’s it. A new paradigm will be accepted. So we made a mistake. Okay. Next.

And now seriously: What does the new plan presented (in the words of Ron Ben-Yishai) by the coordinator of government activities in the territories actually say? It calls for recognizing the unity government, easing the blockade, re-connecting the West Bank and Gaza, allowing building materials into the Strip for reconstruction, extending Gaza’s fishing zone, opening crossings for workers and others to exit the Strip, (“Security considerations will be the only limitation,” writes Ben-Yishai, and reminds anyone who forgot that preventing the entrance of Gazans into Israel or the West Bank, as well as the prevention of exports, never stemmed from security considerations over the past years – but rather were part of a policy of collective punishment).

Reading the article, one can justifiably ask: So what was this war all about? The entire world has expected the recognition of the unity government since May. Hamas’ demands vis-à-vis the blockade were clear from June until the start of the war. Now, most of those demands are being met. This is not a solution, nor a real removal of the blockade or an end to the occupation. But perhaps the war would have been prevented had they would have gone this direction earlier. No? 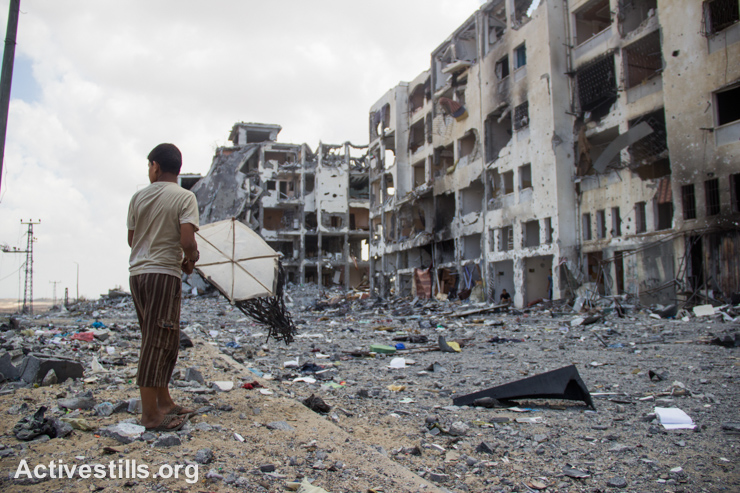 Actually, no. The entire justification for the new policy is based on destruction. This is what Ron Ben-Yishai writes:

Hamas needs the billions and a few years of work to rebuild some 7,000 structures that were completely destroyed and tens of thousands of structures that were damaged, to provide jobs for hundreds of thousands of unemployed youth and reassess their power in Gaza. They won’t get these billions and the materials they need from Israel if they renew their fire.

This is the meaning of the new deterrence, which will result in the calm Israel hopes to restore for the residents of southern Israel, by managing the conflict in its current version. We shall see.

Is it any clearer? Only now, after we unleashed destruction on Gaza, after destroying homes, entire neighborhoods, water and electricity infrastructure, after we destroyed the Strip and brought it to the brink of humanitarian disaster – only now can we come out looking good. We can bring in supplies, support the economy as well as international efforts for reconstruction developed in Cairo, backed by both Arab and Western states. But not too much, of course. Only enough to show that we are doing something, but not enough to create a real change in the power dynamics and bring about real hope that goes beyond reconstruction.

This is the precise meaning of “managing the conflict.” On the political level, there will always be a reason not to allow a two-state solution, or any other solution that will bring about the end to millions of people living under military rule. Whether it’s terrorism, Arafat, Abbas, a divided Palestinian population, a united Palestinian population, the Arab Spring, Iran, ISIS. Don’t worry, there will always be a reason.

And what happens in reality? We continue to rule over millions of people who lack basic civil rights. We allow them to live, but only as long as it matches our comfort level. Let them reconstruct, but through our largesse. Let them have electricity and water, but limit it, and make sure we supply it. Oh, and let’s not allow them to build a power station or allow them to pump water from the ground. Let them work their land through, but they must do it for us after it has been expropriated. Or they must obtain a permit to reach their land. Let them establish a new city for the middle class, but they must know that it will not happen unless we sign on the dotted line. Let them deal with the day-to-day, but never any more than that. 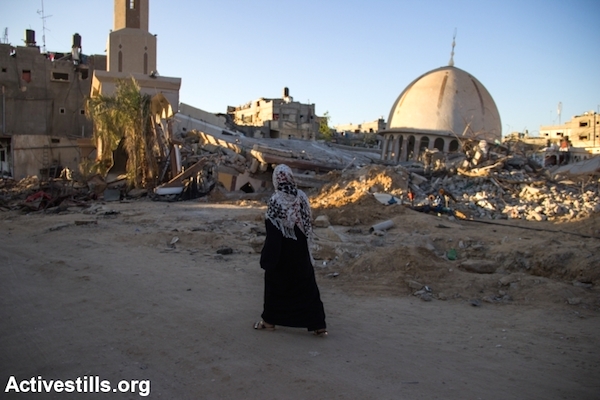 A Palestinian woman walks past the rubble of a mosque in the village of Khuza’a, East of Gaza Strip, September 9, 2014. (Photo by Basel Yazouri/Activestills.org)

Accordingly, every attempt at real political organizing that strays from the daily existence under our boot will continue to be seen as a threat. It doesn’t matter if we’re talking about elections, local popular struggles or nonviolent actions, political charity initiatives or armed struggle. We’ve prevented all of it, and we’ll continue to prevent it.

So what am I actually saying? That the war was meant to bring about destruction such that Hamas will be too busy with reconstruction for anything else? A bit conspiratorial, no? It’s not like top-brass of the defense establishment sat in a dark room and said “Ha ha ha! We’ll go to war based on a false premise to ensure they get stuck with reconstruction for years! That will keep them busy!”

I don’t know. I have no idea whether the establishment exploited the intolerable rocket fire on the towns in the south in order to justify an operation whose means (such as arbitrary artillery fire) were used for political ends. Similarly, there is no way to know whether the defense establishment exploited the the suicide bombings in the beginning of the 2000’s to justify the building of the separation barrier in such a way that annexes Palestinian land, allows for the expansion of settlements and disconnects Palestinians from their land. We can only assume. We can look at reality and see how after we’ve been told that there is only one way to respond to terror -and it seems that that very same way serves the agenda of maintaining the occupation. Coincidence? You’ll be the judge of that.

Related:
Why the IDF cannot be trusted to investigate itself
Short-term memory loss champions of the world: Gaza? What Gaza?
PHOTOS: Gaza’s children face an uncertain future