Two more Palestinian families from East Jerusalem’s Sheikh Jarrah neighborhood received this week eviction orders. According to Haaretz’s report, the families were requested to leave their houses within 45 days. No alternative residency was offered to them.

“Failure to comply [with the order] will force my client to act against you with all means available according to the law […] in such a way as may cause distress, anxiety and large and unnecessary expense,” the notices said.

The lawyer who served the order, Anat Paz of law firm Eitan Gabay, informed the families they would be liable to a fine of NIS 350 for each day the remained in their homes beyond the eviction deadline.

Each family was also ordered to pay  NIS 12,000 per year for each of the last seven years. The notices did not reveal names of the claimants to the properties

The Palestinian residents of Sheikh Jarrah are refugees who fled their homes in Jaffa and West Jerusalem in 1948. They were offered a land in Jerusalem to build their homes on by the Jordanians in exchange for agreeing to give up their refugee status (ironically, that’s what Israel always demanded the Palestinians in Arab countries do). Israel conquered and annexed East Jerusalem in 1967, and recently, the pre-1948 Jewish owners of the land in Sheikh Jarrah authorized a rightwing settlers group to have the Palestinians evacuated and the neighborhood settled with Jews.

Israeli courts repeatedly ruled in favor of the Jews claiming the land based on the pre-1948 documents – while at the same time the Palestinians were forbidden from claiming back the houses they left in 1948. Unable to have their old houses, evacuated from their current homes – Jerusalem’s municipality plans on building there 200 housing units for Jews – the Palestinians have literally nowhere to go. They don’t even hold a refugee status.

The injustice in East Jerusalem is so evident, that the struggle to stop the evacuation of the Palestinians became a new symbol for many Israelis. What has began as a very local grassroots effort by a handful of activist (many of them Anarchists) is now drawing a crowd of hundreds each week – and sometime more people and more than once a week. Here is a video from the protest two weeks ago, when some 30 demonstrators were arrested by police, and one had his arm broken.

Personally, I find the struggle in Sheikh Jarrah to be the best thing that happened to the Israeli left in years. The number of the people present there doesn’t seem that impressive, but the crowd grows each week, and it is clear that the police and the municipality will find new evacuations very hard to carry out.

More important, this struggle is becoming an inspiration to many who all but gave up on political activism – and not just in Israel. And it’s happening without any political party or a leftwing organization supporting it, and under some very radical messages. For the first time I can remember in years, the left doesn’t try to “move to the center” in order to win the support of the more conservative public, or engage in all sort of competitions in patriotism with the rightwing – ones that we obviously will never win – but rather sticks to its principles without apologizing or justifying itself.

There is no common platform in Sheikh Jarrah except for this very specific struggle. Nobody asks if you support one or two states, if you are a Zionist, Post Zionist or anti-Zionist. People just come each Friday to Jerusalem and stand for what they think is right – and so far, it works well enough. Sometimes I even get the sense that if this thing wasn’t happening here, it would have happened somewhere else. The energy feels bigger than this specific incident, as if there are finally enough Israelis who say that things have been going in the wrong direction for far too long – that a line had to be drawn, and it happened to be drawn in Sheikh Jarrah.

I took those two pics on the weekly protest last Friday, to which author Mario Vargas Llosa paid a visit. 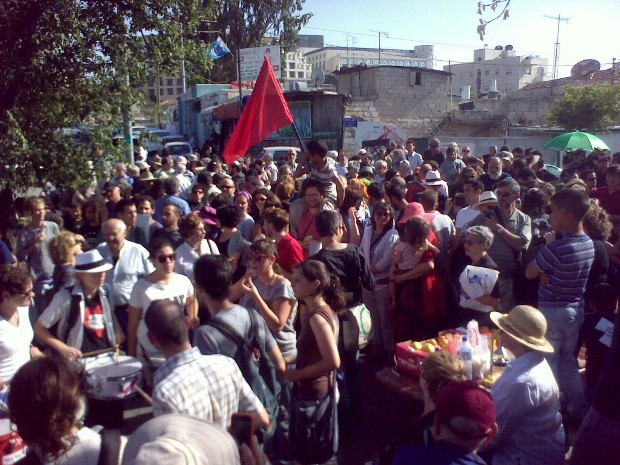 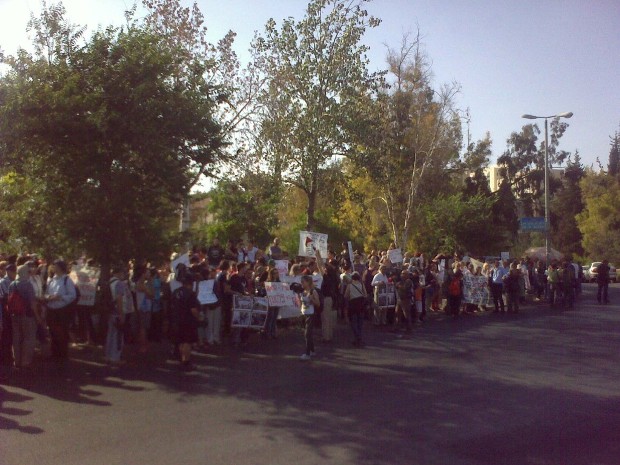