Spending the night with Palestinian families in East Jerusalem, hoping to stop the bulldozers coming to demolish their homes. 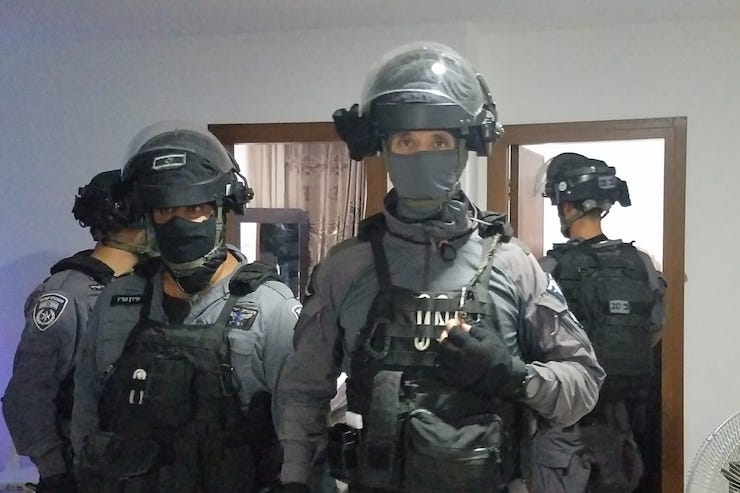 Armed Israeli soldiers storm into a Palestinian home in Sur Baher, East Jerusalem ahead of the building’s demolition, early the morning of July 22, 2019. (A. Daniel Roth)

I am awakened by the “thud thud thud” of someone pounding and then the sound stops. It feels like I am waking up after only five minutes of sleep. Each of my eyes feels like it weighs 10 pounds. I can’t remember where I am, but the sound is unmistakably a fist hitting a door. I hear rustling somewhere near me and realize I’m in a dark room, on a mattress on the floor surrounded by other people.

I am in a room with 20 or 30 other activists. We have been sleeping for a few short hours in an office in the Palestinian neighborhood of Sur Baher, which straddles the Green Line between East Jerusalem and the West Bank. We are here because the local community is facing a number of home demolitions.

I jump to my feet. The knocks were from a Palestinian resident sent to wake us up when the army arrives. The activists sleeping over in Sur Baher had come from Palestine, Israel and around the world. Many of us are Jews from diaspora communities and members of All That’s Left: Anti-Occupation Collective.

We are all there because in prior years, activists, organizers, and community members have worked to build partnerships across national and ideological divides. We are there because when the Israeli High Court ruled in June that a number of homes could be destroyed in the Wadi Hummus area of Sur Baher, those relationships sprung to life. Invited and led by the residents of Sur Baher, folks began to organize. One of several buildings slated for demolition in the East Jerusalem neighborhood of Sur Baher, July 22, 2019. (Emily Glick)

It’s 3 a.m. and my heart sinks. All I can think about is what I am about to walk into. I follow others down the stairs, out the door, and into the cold summer morning, wondering how I would cope if my home was permanently under threat of demolition.

Israeli demolitions in East Jerusalem are fairly common, but these homes happen to be located in Area A of the occupied West Bank, under full Palestinian civil and security control according to the Oslo Accords. Israeli authorities say the demolitions are being carried out for “security reasons,” claiming the buildings were built too close to the separation barrier. It’s a well-worn excuse.

The beeping of trucks and the revving of engines moving heavy machinery are distinct in the distance. We move swiftly down toward those sounds that fill the darkness at the foot of an unfinished, multi-story building. This is just one among several buildings slated to be demolished. We weave past Israeli army jeeps and Civil Administration pick-up trucks and arrive at a line of police officers, some masked — all of them armed — telling us to stop and move back a few meters here or several steps there. It’s all seemingly arbitrary, but there is little we can do.

Some of us head off to another home after getting word that a family, at risk of losing their home today, wants others there to be there with them. Their hope? To stop or slow the impending demolition of their home.

A small group of us enter quietly with nods and greetings in Arabic. We sit in the living room while the couple who live there sit in their bedroom. I imagine they are feeling shattered. 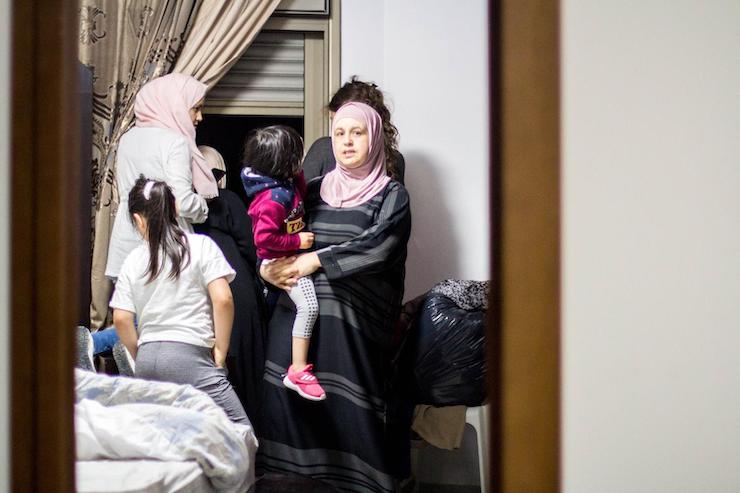 This time the children and teenagers of the house have come to wait together. The next hour is filled with the sounds of activists planning, kids learning English words, coffee, and prayers. According to rumors, nine busloads of soldiers and militarized police are being brought to the area to secure the massive number of demolitions set to take place.

Still, there is more time for activist plans, children’s games, and contemplation of how these young uniformed people can allow themselves to take peoples’ homes away from them.

It’s now around 5 a.m. and the light is creeping in. The banging on the door feels different this time. The patriarch of the house opens the door and uniformed, armed police officers flood the apartment. They take stock of the family, activists, and cameras staring at them and proceed to detail their plans to clear the house of all inhabitants.

The patriarch of the house sits down and when told to leave answers in Hebrew: “You can demolish the building over our heads. Our whole lives are here. Where can we go?”

The sleepless night pads my emotions. I am in the main room of the apartment surrounded by armed Israeli officers and a moment later I am being pushed and pulled out to the street. There, families, neighbors, and activists – some with bloodied faces – gather behind the line of armed personnel to watch as the demolitions go on.

Some move back quietly. Others continue to yell and cry. I’m exhausted and thinking about what to do next, about the losses endured by those families and that community. I’m thinking about the fact that our movement is not winning yet, but we are most definitely growing.

Daniel Roth is an educator and journalist based in Jerusalem. His writing and photography is at allthesedays.org. Follow him on Twitter: @adanielroth.