Despite the openness of forced displacement in Israel and the OPT, the public and centers of power do not grasp the inherent severity and racism of the practice. A comparative case, albeit a controversial one, may help to put Israel’s policy into perspective. 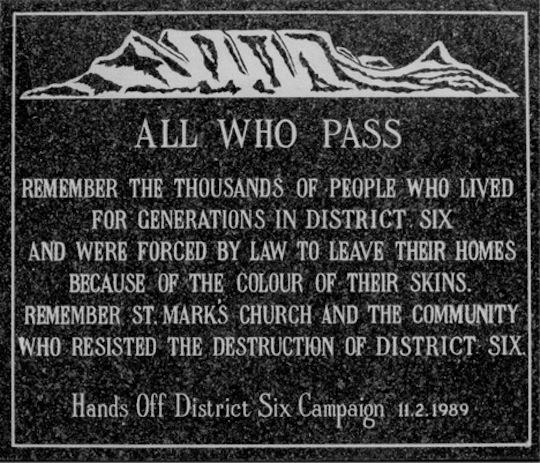 Israel’s policy of forcibly displacing and “transferring” the Palestinian Arab population is occurring both in the Occupied Territories and inside Israel itself. The problem is that despite knowledge of the practice, the public and centers of power do not grasp the severity of the policy or the racism behind it, both of which require harsh condemnation and immediate action in order to stop the displacement. A comparative case, albeit a controversial one, may help to put Israel’s policy into perspective.

In apartheid-era South Africa, in addition to the “Bantustans” that divided communities across the country, major cities were divided into municipal districts designated for particular races. In Cape Town, “District Six” gained particular infamy over a government plan to forcibly remove 60,000 non-white residents in order to develop the area solely for white South Africans (watch this clip).

The process began in 1966 when the state declared District Six a “White Group Area,” automatically rendering its black, Coloured and Indian inhabitants as “illegal” residents under South African law. From then until the late 1970s, the government demolished thousands of homes in the District and expelled all non-white residents. The displaced residents – a cosmopolitan community of different ethnicities and religions – were relocated elsewhere according to their race. The areas they were forced into, such as the Cape Flats, became known as the city’s “dumping ground” for non-whites, with thousands trapped in deep poverty and marginalization as a result of their displacement.

Though comparing apartheid-South Africa with Israel-Palestine is heavily debated, the parallels between each country’s policies of dispossession, especially when comparing District Six and the Naqab (Negev), are hard to miss. Israel’s Prawer-Begin Plan will oversee the destruction of dozens of Arab Bedouin villages and the forced relocation of up to 70,000 Bedouin citizens to government-planned “townships.” Like District Six in the 1960s, the Prawer Plan is rooted in the premise that the Bedouins’ presence is “illegal” (despite many of their villages existing before the state’s establishment), and is accompanied by decades of de-legitimization of the Bedouin community, whom the state and much of the public view as trespassers, criminals and malicious people.

The Plan’s true agenda, like in District Six, is a racially-motivated one. Rather than channeling resources to improve “unrecognized” Bedouin villages, Israel is intent on concentrating the Arab Bedouins in as little territory as possible and erasing their land claims in the Naqab. The townships they will be forced into are impoverished, have poor basic services, and do not accommodate the agricultural lifestyle of many Bedouins. While thousands of Arab homes are scheduled for demolition, the government is facilitating the expansion of Jewish communities in the Naqab – some on the future ruins of Bedouin villages. This “Judaization” of the Naqab – think “Jews-only” – moved toward becoming official law when the Prawer-Begin Bill passed its first Knesset reading on 24 June 2013.

The echoes of District Six, however, are not isolated in the Naqab. Throughout Israel and Palestine, the state is continuing its process of population transfer to transform the ethnic landscape. Since 1993, at least 11,000 Palestinian Arabs from East Jerusalem had their residency status revoked due to government claims that their “center of life” is no longer in the city (this policy is not applied to Jews). In Jaffa and Akka, gentrification is deliberately employed to pressure Arab residents out of their neighborhoods and bring Jewish residents in their place. The uprooting of Palestinians in the South Hebron Hills, Jordan Valley and the rest of Area C aims to clear the land for Jewish settlements across the Occupied West Bank.

These racial policies are increasingly being consolidated into Israel’s legislation. In alarming resonance of South Africa’s “Group Areas Act”, the Admissions Committees Law (2011) allows communities in Israel to reject housing applicants based on “social suitability” and the “social and cultural fabric” of the town – implicitly sanctioning discrimination based on ethnicity, religion, and other such criteria to preserve communal segregation. Meanwhile, members of the current Knesset are proposing various drafts of a “Jewish identity bill,” which aim to reserve the right of self-determination exclusively to Jews, with some versions explicitly ordering the Israeli courts to prioritize the “Jewish” nature of the state over democratic principles in their decisions. Such legislation not only seeks to erase the national identity and history of the Palestinian people, but will make it even harder for Arabs on both sides of the Green Line to defend their homes before the courts, which have continually failed to protect their basic rights from Israel’s actions

All the above methods of displacement and discrimination against non-Jews are “legal” under Israeli law, in the same way that labelling non-white residents as “illegal” in District Six was entirely within the framework of South African law. The fallacy in Israel is that its legal and political systems provide the equilibrium for democracy and justice; but as we can see, those laws and policies are inherently unjust. When the law’s purpose is to ensure that one ethnic group has superior rights to another, the ideology that breeds those laws must be challenged. It may not be South African apartheid, but there is no doubting the blatant institutionalized racism that governs the country. In the same way the world decries the events of District Six and the mentality behind it, so too must the world confront their replications in the Naqab and the rest of Israel-Palestine.

Amjad Iraqi is an International Advocacy intern at Adalah – The Legal Center for Arab Minority Rights in Israel. He is a graduate of the Peace and Conflict Studies program at the University of Toronto. The opinions in this article are solely the author’s and do not represent the views of Adalah.