War in Israel has become a constant source of profit, with the West Bank and Gaza Strip used as experimental sites for arms dealers backed up by intellectuals. These are the protagonists of ‘The Lab,’ a new film by Yotam Feldman. In its exceptional interviews, the film reveals that the image of the arms dealer operating in the shadows is a thing of the past.

By Eilat Maoz (Translated from Hebrew by Guy Eliav, edited by Ami Asher) 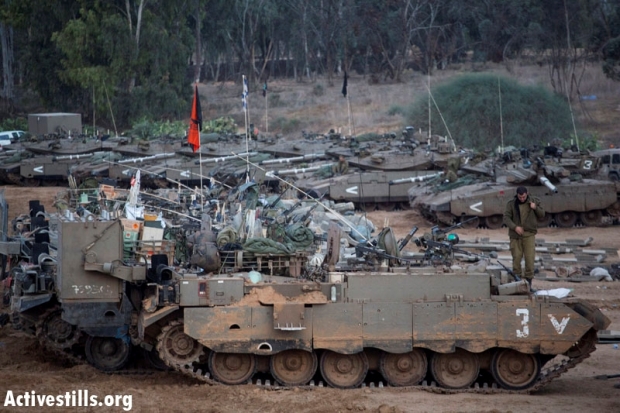 A laboratory is a site where scientists conduct experiments under controlled conditions – a space where large-scale phenomena such as hurricanes are miniaturized and tiny objects such as microbes are magnified to observe complex processes and learn how to control them. A laboratory is where the world is divided into predictable phenomena and observable objects. Where knowledge is created and later disseminated, making the world better understandable and better organized, through the lens of the knowledge we have accumulated about it.

Yotam Feldman’s new film, “The Lab,” introduces us to the men who made the Occupied Palestinian Territories the largest and most advanced weapon-testing laboratory: arms dealers and developers, defense experts and industry leaders. Despite the urge to compare it to other Israeli documentaries which have recently exposed the secret lives of the people running the occupation (such as “The Law in These Parts” and “The Gatekeepers”), “The Lab” is above all a film about knowledge. Security knowledge created in the flexible zone between two dimensions separated by a very blurred line: the military and the market.

On the first plot level, “The Lab” follows Naomi Klein’s claim that the main reason for Israel’s economic prosperity at a time of political instability and global crisis lies not in its outstanding human capital that enables it to smoothly escape the negative economic repercussions, but rather the continuation of regional conflicts. In The Shock Doctrine, she shows that most of Israel’s economic growth can be attributed to the huge defense industry, which has become Israel’s main export industry, particularly following 9/11 (In 2012, Israel was ranked the world’s sixth largest arms exporter). She also claims that the West Bank and Gaza Strip are not only the world’s largest open-air prisons, but also the world’s largest test-labs, where “Palestinians are no longer just targets. They are guinea pigs.”

For Feldman, recent military campaigns, primarily Operation Cast Lead, illustrate the transformed nature of war: from a temporary disturbance involving damage to life and property, to a fixed, profitable state of affairs. Thus, the film joins other voices seeking to assess the profits derived from the occupation, and not its alleged costs to the Israeli society. The film’s true power is revealed, however, not when it shows up uninvited to closed events in order to confront the profiteers, but in the exceptional interviews held with them. These reveal that every arms dealer has a worldview that is quickly unfolded in front of the camera. Warmongers, it seems, no longer operate in the shadows. If arms are sold in the open market, they should be treated like any other commodity, and since what is hidden cannot be sold, the veil of secrecy must be quickly removed from the security market, turning the occupation from a disgraceful well-known secret into a selling point.

Captivating success stories of Israeli field commanders who mobilize their hands-on combat experience to sell more arms reinforce the impression that the occupation provides lucrative economic opportunities. At the same time, the stories suggest that the intimate relationship between the military and the economy in Israel is bigger than the sum total of all personal relations between military professionals and businessmen or from a few field commanders with a business acumen. In international conferences where Israeli models proudly present weapons to eager men, it appears that the Israeli Defense Ministry operates as Israel’s chief export agent. This is where the boundary between the “economic” and “political” collapses, and where the phrase ‘economic strength’ is revealed to be more than just a rhetorical pun: it is a work plan. A plan founded on the assumption that security is a product the country supplies to its law-abiding citizens, and that a strong economy is the basis for military strength. Whereby the state’s role in expanding the defense industry is naturally given, since it supports “growth,” and defense exports – even when completely private – are seen as a national success story. To borrow from cinematic terminology, the Israeli defense industry is a clear case of co-production.

Importantly, this co-production has a third partner: Israeli academia. One of the film’s most intriguing aspects is that it interweaves the stories of weapon inventors and arms dealers with those of scientists and intellectuals.

Military philosopher Shimon Naveh takes us to a desert training base, modeled on a Palestinian town. With a Nike T-shirt, military camouflage pants and round hipster glasses, he walks around the ghost town, explaining how French philosophy has helped him come up with a military doctrine suitable for postmodern warfare: deconstruction, but of urban space. Bluntly put, the doctrine is based on drilling holes in the walls of residential houses and moving like a rhizome outside paved roads. Naveh can thus take credit for the destruction wrought by the IDF as it reoccupied West Bank cities during Operation Defensive Shield.

At the Social Sciences Building at Tel Aviv University, we meet Prof. Yitzhak Ben Israel, who is busy developing mathematical models predicting the success rates of targeted killings and arrests. His models enable him to predict, using a simple substitution formula, the number of people that need to be killed in order to bring about the collapse of an entire organization or political system. Ben Israel’s research is just one example for the thriving security-knowledge industry in Israeli academia, that even the few Israeli academics who publicly oppose the occupation tend to ignore.

Feldman’s hybrids – cyborgs of science, technology and military – dramatically expose the far-reaching repercussions of the migration of knowledge from the Israeli lab to the rest of the world. For example, Israeli riot control technologies sold to Brazilian police for fighting drug dealers cast Rio’s favelas in the shape of Palestinian refugee camps; Kabul is reminiscent of Baghdad, which in turn looks like Jenin. This similarity is more than the product of Orientalist imagining or the hatred of the poor and black (although these are certainly important factors): it is forms of knowledge, hi-tech industry products, which make these spaces so disturbingly similar.

Eilat Maoz is PhD student at the Department of Anthropology, University of Chicago. Her work focuses on the political economy of violence and she supports the Palestinian call for Boycott, Divestment and Sanctions.