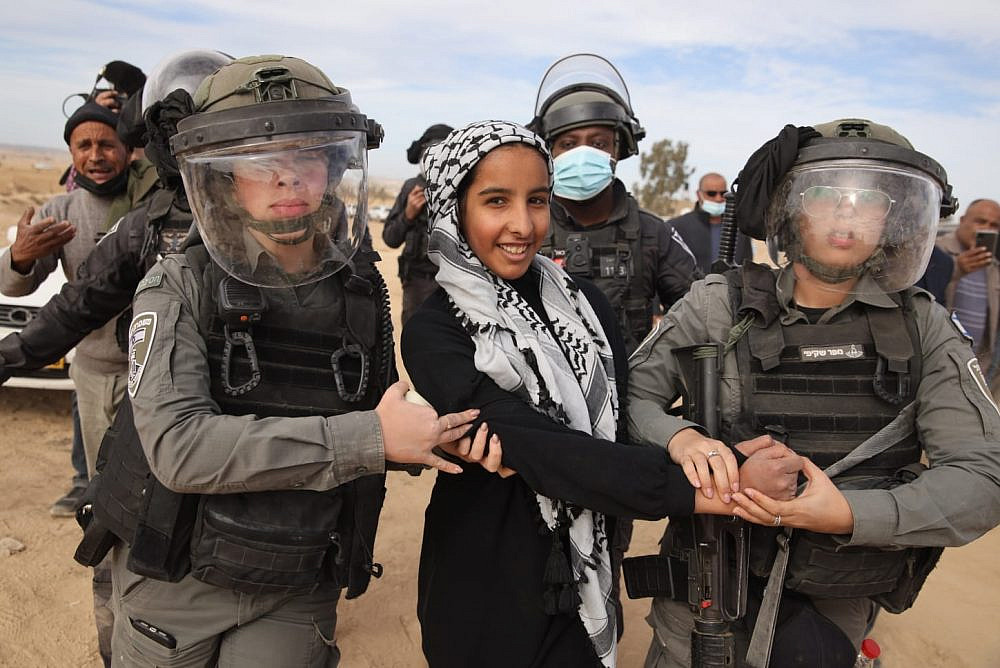 Israeli police arrest Jenin al-Zarqa during a protest in the village of as-Sa’wa al-Atrash in the Naqab/Negev, January 13, 2022. (Oren Ziv)

“We have Israeli IDs, we work, we respect the law, but this means little to the state. Instead, they tell us that a plant brought over from Europe has more rights than a non-Jew who was born and raised here. This is our so-called ‘democracy.’” These words of Ali Abu Al-Qi’an, a Bedouin resident of the village of Atir, nearly seven years ago astutely capture what has been unfolding in the Naqab/Negev Desert this past week.

Guarded by massive police units armed with riot gear, the Jewish National Fund (JNF) began to excavate agricultural land that had long been grazed by the Bedouin of the village as-Sa’wa al-Atrash. The plan is to grow a forest in the area, but the purpose is hardly environmental: it is to seize the land for Jewish control and to block Bedouin from using it. Hundreds of Bedouin citizens have been protesting at the site and on major highways in the south, with the Israeli police brutally repressing the crowds and arresting over a hundred people.

Haaretz reported on Thursday that six members of the JNF’s executive board were angered that the organization’s chairman, Avraham Duvdevani, did not consult with them about the plans. “When something like this [the protests] happens, it mars our good name,” said one board member in a statement that either is startlingly oblivious, or feigns ignorance about the organization’s historic mission.

The JNF’s “good name” is carved onto wooden signs and stone plaques in man-made forests across both sides of the Green Line, proudly celebrating Israel’s conquest and “redemption” of the land of Palestinian villages that have been destroyed and dispossessed since 1948. Abu Al-Qi’an’s own community of Atir, which was built in the 1950s after Israel’s military government expelled the tribe from their homes during the Nakba, is to be demolished in order to expand another JNF forest cruelly named “Yatir.” These projects are carried out hand in hand with the Israeli state, which grants the JNF a special place in its land and planning bodies.

The resistance to this colonial policy in the Naqab is unfolding in different and at times discordant ways. Like all Palestinians, the Bedouin community is not a monolithic group; along with clan and tribal identities, some segments of the population are closely allied with the Israeli state and serve in its security forces, while others are more assertive of their Palestinian identity and activism. The Islamist party Ra’am, which has strong support among Bedouin voters, is attempting to leverage its place in the coalition to block the afforestation plan, while the Joint List argues that it is futile to sit in a “government of change” that not only continues its predecessor’s policies, but actively intensifies them.

Yet it is precisely that complexity that makes this week’s protests so extraordinary. A decade ago, the Naqab became a focal point of Palestinian consciousness when Israel began advancing the “Prawer Plan” to displace 70,000 Bedouin in so-called unrecognized villages — to which Israel refuses to provide basic public services — and force them into impoverished townships. The resistance it inspired both locally and internationally helped pressure the Israeli government to abandon the plan, though the authorities continued to pursue their mission through other means.

Now, the sight of hundreds of Bedouin confronting the police and the JNF has once again captured the sense of injustice permeating the Bedouin community and all Palestinians inside the Green Line and beyond. It was a feeling sharply manifested during the uprising of last May, and it has been rumbling below the surface ever since. It is too soon to tell how long this latest wave will endure, but it is a reminder that citizenship — and for that matter, military service and political representation — still cannot protect the Bedouin from Israel’s colonial impulses.