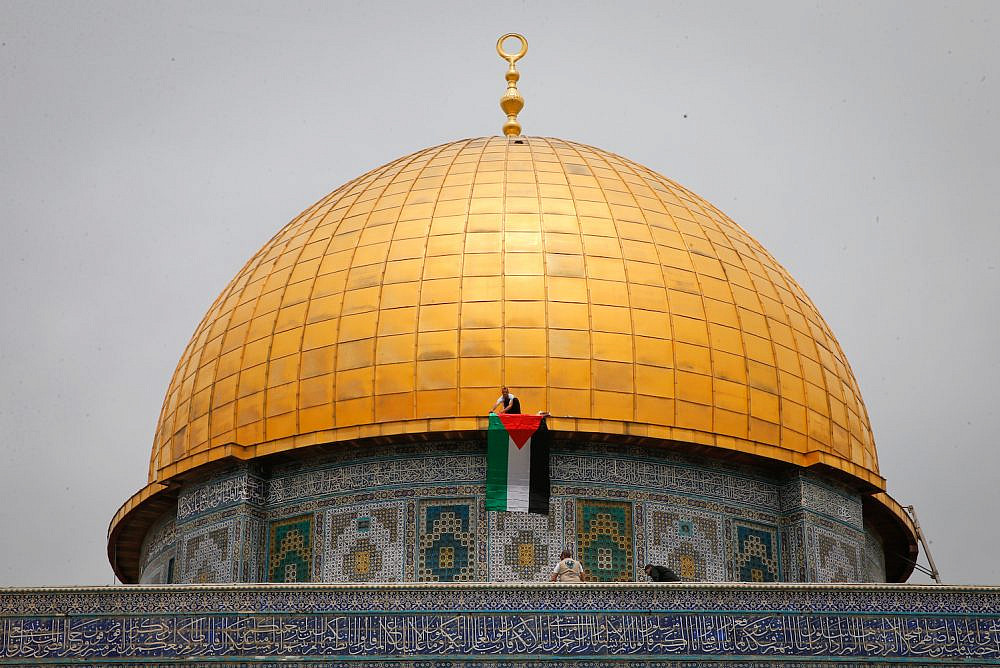 Photo: A man places a Palestinian flag on the Dome of the Rock after Friday prayers during the holy month of Ramadan in Al-Aqsa compound, Jerusalem, April 22, 2022. (Jamal Awad/Flash90) (Flash90)

As tensions soared in and around Al-Aqsa compound in recent weeks, pro-Israel hasbara activists tried to put forth two main messages: that Israel is not changing the so-called “status quo” on the Temple Mount/Haram al-Sharif, as Palestinians claim; and that it is actually Jews who are discriminated against and whose freedom of worship is being taken away under the parameters of the status quo.

The first argument is simply not true. While there have been unfounded rumors on Palestinian social media about an Israeli government decision to take over Al-Aqsa and turn it into an entirely Jewish religious site, no one can deny that Israel has been actively reshaping the status quo in one of the region’s most volatile locations. Not too long ago, the Islamic Waqf exclusively ran the compound, Jewish presence within the compound walls was marginal, and any Jewish prayer on top of the mount was forbidden — as it had been for decades.

But all of that changed over the past few years. Israeli police forces are seen more often deep within the compound; the numbers of Jewish worshipers are soaring; and the phenomenon has been mainstreamed to the point that the Knesset’s Education Committee recently recommended taking Israeli schools on tours up to the site. The current Ambassador to the U.K., Tzipi Hotovely, among other top officials, said she dreams of seeing an Israeli flag flying atop the mount.

Settler activist Ayala Ben Gvir, the wife of Kahanist MK Itamar Ben Gvir, commended the previous Netanyahu-led governments for “opening the possibility to go up the mountain with ease. There are now a Yeshiva and a Kolel on the mount, in addition to regular prayer and religious teachings… we must progress to making animal sacrifice and rebuilding The Temple.” In July 2021, Israel’s Channel 12 News called these changes “a revolution taking place quietly and gradually under the radar.” Under the current government, these policies have continued uninterrupted, as Baker Zoabi reported, before the recent escalation. The status quo which governed Al-Aqsa for decades is, in all these senses, no more.

The second talking point argument is more complicated. “How can you blame Jews for wanting to pray at their holiest site? How can you justify discrimination against Jews and obstruction of freedom of worship?” To a certain degree, these points are true: the fact that one site holds such significant meaning for two religious communities requires smart and sensitive solutions, to be reached through thoughtful dialogue between equals. However, there are no equals in Israel-Palestine, and Israel has increasingly shown that it is not interested in thoughtful dialogue on the matter.

Al-Aqsa compound has for years been one of the only places where Palestinians enjoy just a semblance of sovereignty and freedom from their occupier. But it has not really been an island of sovereignty. With Israel in full control of the entire land between the river and the sea, it has been Israel that decides, for example, to block the freedom of worship for millions of Palestinians in the Gaza Strip, the West Bank, and sometimes even Palestinian citizens of Israel, by denying them access to Al-Aqsa.

It is Israel that decides when to curtail the compound’s limited sovereignty by sending police to raid the mosques and attack worshipers and journalists. It is Israel that changes the status quo unilaterally. And, most importantly, it is Israel that has created a system of apartheid wherein, in every other part of the land, Jewish supremacy over Palestinians is guaranteed, maintained, and entrenched by law and by force.

Any attempt to read into the developments on the Temple Mount/Haram al-Sharif without taking into account that wider context of Jewish dominance, of the deep and inherent discrimination against Palestinians, and the curtailing of their human and religious rights, does injustice to an already unjust political reality. If we are ever to see a solution to the religious conflict over Jerusalem, we must create the political structures that will guarantee full equity, democracy, and justice for everyone in this land.