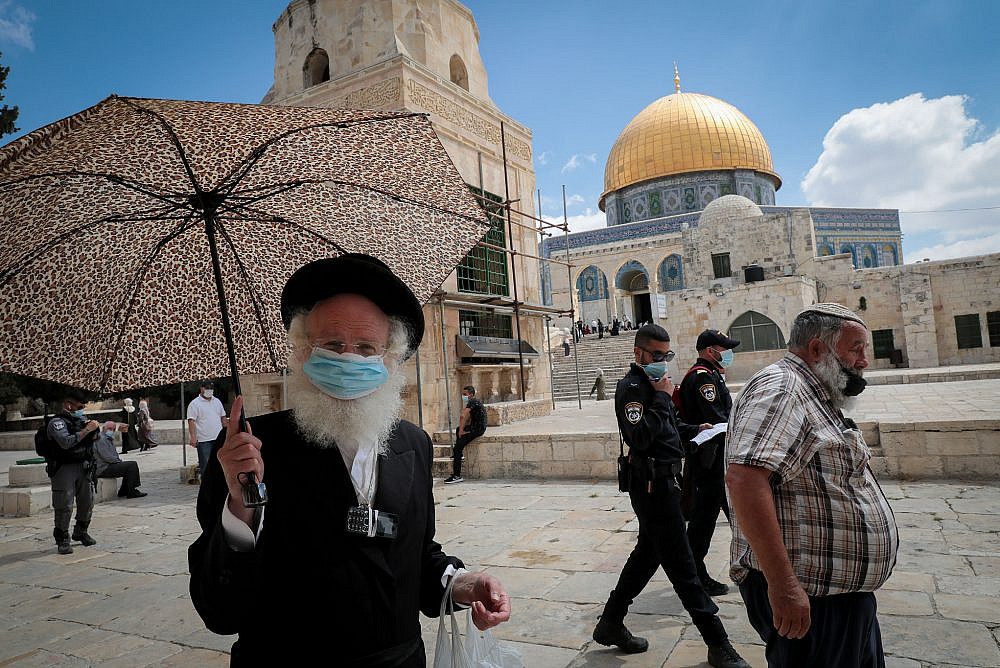 For much of the past decade, religious Jews have been trickling onto the Temple Mount/Haram al-Sharif in the Old City of Jerusalem — considered the holiest side in Judaism and one of the holiest in Islam — in violation of a fragile, decades-long “status quo” at the compound. Yet over the past few months, and particularly since the establishment of the Bennett-Lapid government, the number of Jews who have entered the compound has reportedly grown dramatically.

According to statistics published by Yaraeh, an Israeli organization that promotes Jewish entry to and prayer on the Temple Mount/Haram al-Sharif, around 10,000 Jews have entered the compound over the past three months — a 35 percent increase compared to previous years.

The Temple Mount/Haram al-Sharif, where Al-Aqsa Mosque and the Dome of the Rock (Al-Sakhra) are located, is one of the most contested places in Israel-Palestine. Since Israel occupied East Jerusalem in 1967, an arrangement between Israel and the Islamic Waqf, the Jordanian religious caretaker of the compound, accords that only Muslims are allowed to worship in the compound, while Jews will pray at the Western Wall.

Over the past few months, however, Israeli police have been reportedly easing restrictions on Jewish prayer at the compound; Jewish worshippers have also been filmed being allowed to pray freely on the mount as police officers look on. While such incidents slowly grew in frequency in recent years under the previous Netanyahu governments, the sharp rise in the past few months has been noticeable.

It seems to be no coincidence that this dramatic increase is happening under the new Bennett-Lapid government. In mid-July, Prime Minister Naftali Bennett published a statement that seemed to affirm the right of Jews to “freedom of worship” at the mount, leading to severe condemnations by Muslim and Arab leaders.

In October, the Jerusalem Magistrates’ Court overturned a 15-day police ban against Aryeh Lipo, a leading Temple Movement activist, from the site after he was seen praying there. Lipo is part of a broader religiously fundamentalist movement that seeks to encourage and normalize Jewish prayer at the site, with the hopes that one day a Jewish Temple will be rebuilt there.

The judge ruled that because Lipo’s prayer was done quietly, it did not pose a security risk, an argument which police cite to justify the enforcement of the ban. Following apparent U.S. diplomatic pressure, an appellate judge struck down the court’s ruling.

“Ten years ago, even five years ago, such things could not have happened,” says Hagit Ofran, the Director of Peace Now’s Settlement Watch team, of the recent increase in Jewish visitors. “Jews could not hold prayers [at the compound]. The Israeli police prevented this. They would intervene and prevent Jews from performing religious prayers or ceremonies while visiting the courtyards of Al-Aqsa Mosque.”

According to Ofran, it was during the tenure of Gilad Erdan as public security minister between 2015 and 2020 (Erdan is now Israel’s UN ambassador) that the Israeli police began cooperating with Jews who wanted to go up to the Temple Mount/Haram al-Sharif. This continued under Amir Ohana, who served in the post between 2020 and 2021. 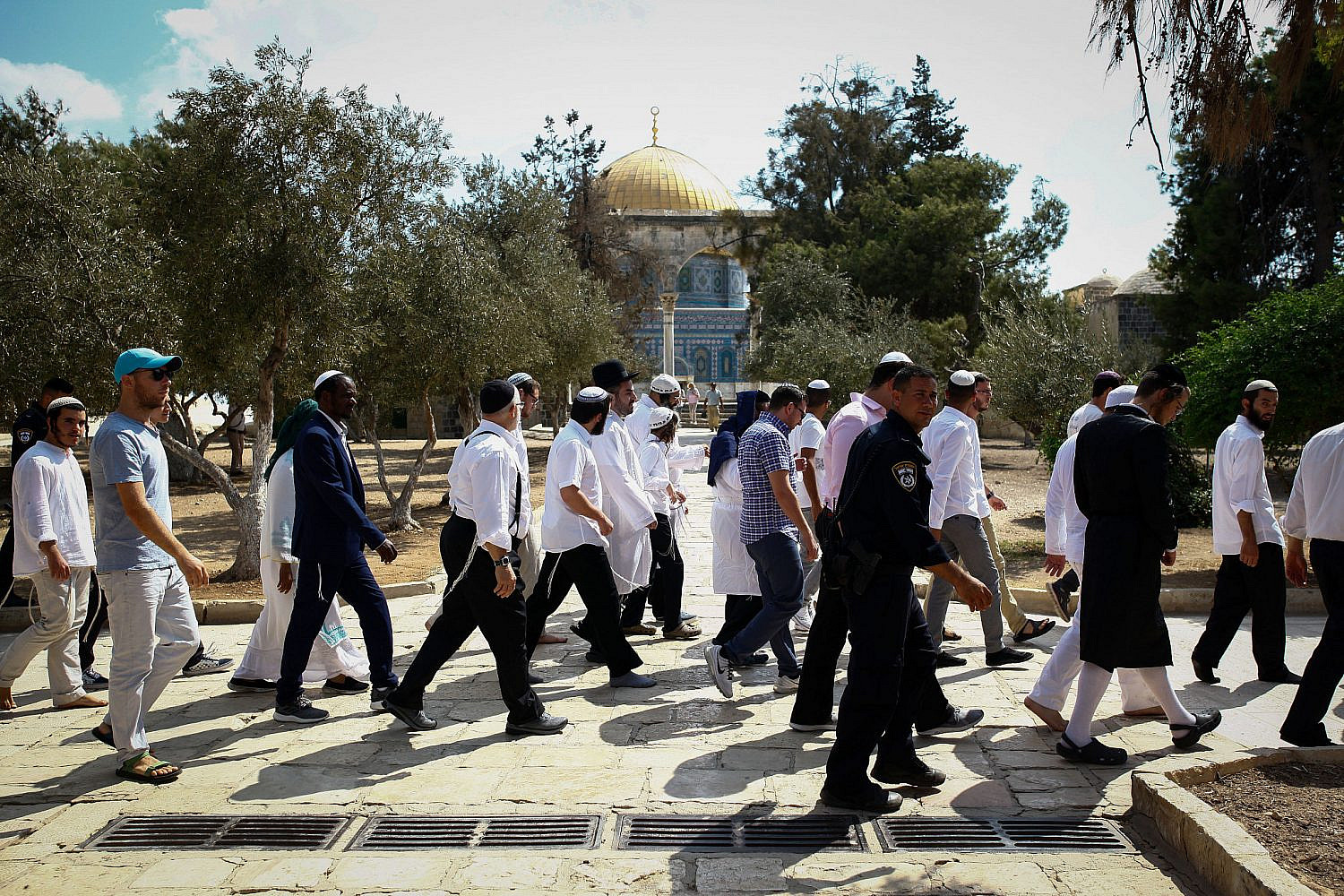 “The Netanyahu government contributed significantly to the tension and all these entrances [to the compound], so much so that it was the reason Netanyahu was no longer in touch with Jordan’s King Abdullah II,” Ofran said. “Now, this is continuing and the numbers are rising, although Public Security Minister Omer Barlev is showing different intentions.” Barlev, who took up his post this summer, pledged to continue cooperating with the Jordanian Waqf and prevent Jews from praying on the Temple Mount/Haram al-Sharif.

“In the past 10 years, we have seen that many times, tensions begin in Jerusalem after these visits,” Ofran continued. The outbreak of the “knife intifada” in 2015, the severe tensions that followed Israel installing metal detectors on the compound in 2017, and the violence that erupted across Israel-Palestine this past May, were all preceded by increased visits by Jews to the Temple Mount/Haram al-Sharif.

“I agree with the assessment that Likud and the Religious Zionism party, as part of the opposition, are supporting [Jewish prayer on the mount] in order to embarrass the government,” Ofran said. “When Likud was in power, there were controls in place to prevent tensions during certain periods. Now they have no problem with escalation — on the contrary.”

MK Ahmad Tibi, who heads the Joint List’s internal Al-Quds (Jerusalem) committee, concurs that the current government coalition is allowing Jews to access Al-Aqsa compound in greater numbers. “There are more incursions, and above all, discreet prayer taking place in the presence of police,” Tibi said, adding that although the right-wing parties in the coalition were facilitating the increase, “the center-left is keeping quiet and looking the other way in order to avoid shaking the coalition.”

In July, Asaf Fried — the spokesperson for the Israeli activist group Temple Mount Administration — told Israel’s Channel 12 that Jews have been accessing the mount for years, but that they had been “crying and humiliated.” The sense, he continued, was that “one couldn’t do anything here — that when a Jew arrives [on the mount], he is a nuisance.” But there has, Fried added, been “a total turnaround — entrance to the Temple Mount has improved, there are no lines at the entrance… there is no Waqf following you, there’s much more space to breathe on the Temple Mount.”

Although some Jewish groups are entering the compound for prayer and worship, “the goal of all this activity is undoubtedly political,” said Aviv Tatarsky, a researcher at Ir Amim, a Jerusalem-based watchdog and advocacy group. “The aim is to increase the rate of Jews entering Al-Aqsa compound, which is already seeing an increase [in Jewish entrants], in order to pressure the government into changing the current situation to their benefit. The state, like any state, is susceptible to social and popular pressure,” he continued, and Temple Mount activists are exploiting this dynamic.

Yet as important as the increase in the numbers of Jews accessing the compound is, what they are actually doing there is just as significant. “[I]t’s defying the status quo,” Tatarsky said. “Even if Barlev says he is opposed to prayer there, his police are doing nothing to stop it.”

Tatarsky also noted that although the Education Ministry is not obligated to follow a recommendation by the Knesset Education Committee last month to include the Temple Mount/Haram al-Sharif in compulsory trips for Israeli school students, the proposal is “under consideration.”

Azzam al-Khatib, the head of the Waqf in Jerusalem, said that the Islamic trust’s position on the recent developments is “very clear.”

“These incursions violate the religious, legal, and political circumstances that have been in place since 1967,” he said. “It is unacceptable and contrary to international norms to desecrate the [compound’s] mosques in this way.” Al-Khatib concurred that the rate of Jewish entrants had increased under the new Bennett-Lapid government, and that prayers were taking place openly — with little-to-no police interference, even when the Waqf requested their intervention. The current situation is “unprecedented,” he said. 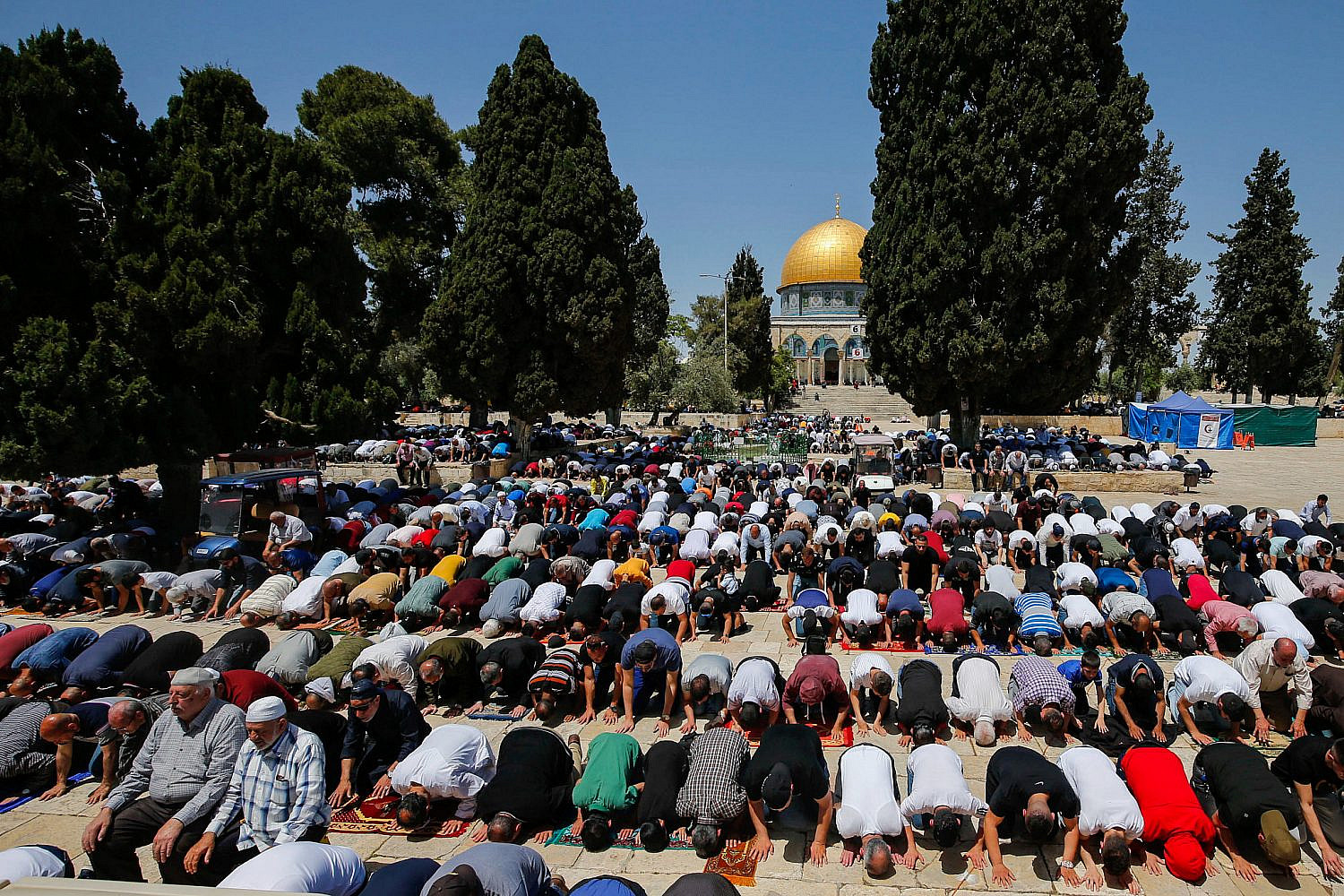 On Nov. 21, Fadi Mahmoud Abu Shkheidem, a resident of Jerusalem’s Shu’afat refugee camp and a reported affiliate of the Palestinian Islamist group Hamas, opened fire at one of the Old City’s entrances to Al-Aqsa Mosque, killing one Israeli and seriously wounding three others. The shooter was killed by Israeli security forces.

The incident led to further Israeli crackdowns and scrutiny of Palestinian residents of the city, while prompting demands for additional security in the area — including a request by Communications Minister Yoaz Hendel to reconsider placing metal detectors at the entrance to Al-Aqsa Mosque. The last time Israel tried to do this, Palestinians led a campaign of mass disobedience that forced Israel to remove the detectors.