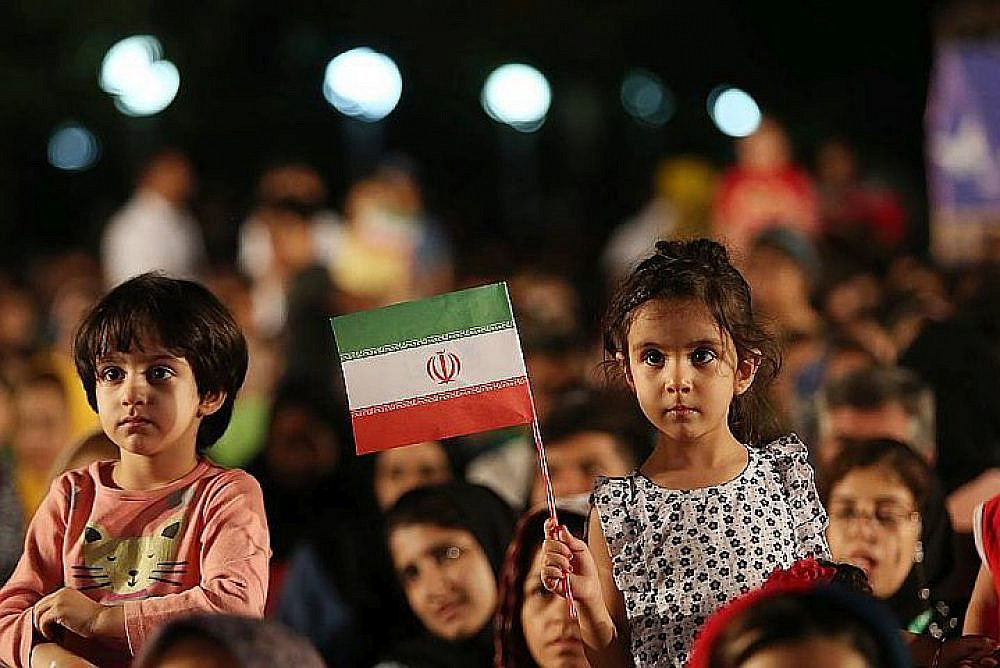 Iranian children take part in the International Festival for Children and Youth.

Several years ago, I decided to Google the term “Persian literature” in Hebrew. The search results astounded me, with Google even correcting me: “Did you mean Russian literature?”

This anecdote could have been amusing had it not been so indicative. Indeed, this technical quirk grotesquely embodied Israel’s view of itself as a “villa in the jungle” — totally disconnected from the cultural landscape that surrounds it in the Middle East. Beyond those villa walls lies danger, enemies whom we must observe with hostility and suspicion. If there is any curiosity about those places, it is usually driven by a need to “know thy enemy,” a worldview undergirded by racism, fear, and peril, as we see in Israeli and American TV shows like “Fauda” or “Homeland.”

Perhaps that was why I was so happy to hear about the launch of an Iranian Studies program for Israeli high schoolers in Jerusalem, in which they can “study Persian and get to know the culture and structure of [Iran].” How wonderful, I thought, that schools will offer students a different look at one of the region’s most ancient cultures, not through the securitized lens that is rife in Israel’s education system. How wonderful, I thought, that they can learn the beautiful Persian language and read the poetry of Hafez, Saadi Shirazi, and Forugh Farrokhzad.

But the brief descriptions that accompanied the curriculum immediately made clear how naive I was. “How does intelligence gathering work?” it read. “How do you conduct a conversation in Persian? And what underlies the major security issues? We will address these issues in the unique curriculum for Iran, security, and intelligence studies.”

Perplexed, I recently spoke with Pini Shmilovitz, who founded and developed the program, to find out why the curriculum was propagating these tropes. Shmilovitz, who currently works as a teacher, previously spent 32 years working in Israeli intelligence services, including the Shin Bet — which explained much about his troubling responses to my queries.

Shmilovitz insisted that although the program’s description looks like an opportunity for Israeli students to train for future service in elite army units, the military itself is not involved in the curriculum. In fact, he said, Persian Studies programs have already existed in a number of cities across Israel for several years.

Still, Shmilovitz noted that about 50 percent of the program’s graduates do end up serving in various intelligence units. “We do not provide [the military] with names, the military locates the students itself,” Shmilovitz said.

The program consists of studies in the Persian language, Iranian culture studies, the Persian Gulf, the wider Middle East, and Islam, together with intelligence and security, all with an “emphasis on research, teaching teens how to carry out research, and how to create new knowledge.” “There’s a network of topics that connect to each other very logically,” Shmilovitz said. “When you deal with intelligence, you cannot come to it as a stranger to a particular place or topic. You have to get to know it.”

He then decided to offer a very telling example to illustrate this. “Imagine that I want to find a robber in a certain village. Not in the security field, but in the criminal field. I need to know the village, the people who work, the families, who is a criminal, who is a good person. I need information, and I’m collecting it. It’s intelligence. That’s how it is in every field.”

You mean that in your eyes, intelligence is the core of the matter, while learning the language and culture of a society is used to hone capabilities for intelligence gathering?

“I can take the chapters that deal with the Middle East, Islam, intelligence, and security and teach it as part of a program about Egypt. When I want to get to know Iran, I learn about society and culture. I learn the language, the slang. When the Palestinian uses the word ‘sabar,’ a word that denotes resistance to siege, he is saying: ‘Even if you put us under siege for as long as you want, our pita and olives and local crop will endure — you will not break us.’ The same thing applies in Persian. Sentences, words — you have to know them.”

I understand the logic, but why is this the job of the education system? After all, intelligence is part of the realm of security.

“Intelligence is part of every aspect of our lives. We teach children to do research, and for that we implement processes that are quite similar to intelligence. That means collecting information, analyzing it, creating a picture, a puzzle — something new. Why should a high school student study criminology or medicine?”

Because criminology and medicine are research disciplines. You are speaking about intelligence and security. What I don’t understand is why an educational program is supposed to provide students with security training.

“You’re trying to make a connection between my program and security roles. There is none. Nowhere does it say that there is any relation here to training for military roles. It’s true that we wanted that. One of my goals in bringing in students was to tell them: ‘There is a chance that the army will take you because of your excellent background in the program,’ but this was erased and does not exist.”

If you were to write a program for American Studies, for example, would you also include a chapter on intelligence and security studies, or does this only apply to Iran?

“Absolutely only for Iran, because Iran is a major adversary, and I think it is a worthy goal for the education system to prepare young people with some basis of expertise in this field so that in the future — if they wish — they can continue to develop it. Not necessarily vis-a-vis security, it can be through the Foreign Ministry, or any field that concerns the relationship between Israel and Iran.”

“Because the other countries of the world do not want to destroy us. We need to adapt what we teach to reality, otherwise students won’t want to learn. It won’t be interesting.”

So Iranian culture outside the intelligence-security context is simply not interesting in your opinion?