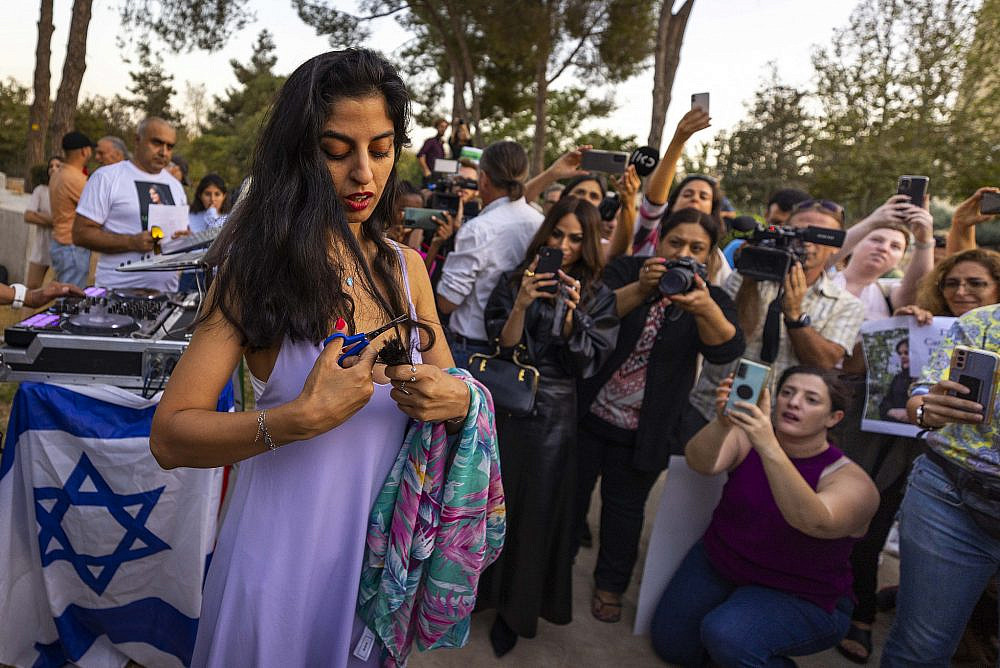 Israeli women cut their hair during a solidarity protest with the women of Iran, Jerusalem, October 6, 2022. (Olivier Fitoussi /Flash90)

For about a month now, the mass protests taking place in Iran under the slogan “Woman, Life, Freedom” have ignited the world’s imagination. The sight of brave Iranian women removing the hijab in the streets of the country, in open defiance of the tyrannical and violent regime, has sparked huge demonstrations of solidarity across the globe. And their call for freedom has turned into a demand by large swaths of the Iranian population to overthrow the Islamic Republic.

First, unlike other solidarity demonstrations across the world, a show of support by Israelis for Iranian protesters could be easily be manipulated by Iran’s leadership to portray the entire thing as a Zionist plot.

But the Israeli solidarity protests raise even more fundamental questions: what is the essence of the freedom in the name of which people are gathering across Israel in solidarity with Iranian women? Is the value of freedom truly dear to the hearts of Israelis, or is it simply an opportunity to tell a different story about ourselves?

A few days ago I received a request to add my name to an Israeli petition in support of the Iranian struggle for liberation. Under the title “In support of women, life, and freedom in Iran,” the petition began with these words:

“As human beings, cultured people, and Israelis who come from a variety of countries of origin, political opinions, religious beliefs and sexual definitions; we, elected officials, academics and researchers, artists and military officers, express our love and concern for the girls and the Iranian people who are currently fighting for their freedom and their lives.”

This is how, with the click of a button, officers in the Israeli army who are busy with the violent and murderous oppression of another people, can secure their place among the forces of global freedom. When I expressed my displeasure at the formulation and whitewashing of the crimes of the Israeli army at the expense of the brave Iranian women protesting, I was asked not to dwell on such trifles. After all, I was told, this was a matter of life and death.

What about the struggle for the liberation of the Palestinian people? Is that not a matter of life and death? Was the blood of the 234 Palestinians shot dead during the Great Return March in 2018 less red than the blood of the Iranians who are being murdered today by their government? Are the residents of Gaza less deserving of freedom than the residents of Tehran? Was the life of the paramedic Razan al-Najjar, who was shot to death during a demonstration in Gaza, less important than the life of Mahsa Amini, whose killing ignited the current Iranian uprising?

Anyone who rushes to deem those largely nonviolent protests in Gaza a “threat” to the very existence of the State of Israel should look no further than the justifications of the Islamic Republic for its violent attempts to put down the protests. The terminology is almost identical. There, too, any call for freedom is portrayed as a ploy to undermine the regime, and any public attempt at organizing in the name of freedom poses an existential danger to the country.

In a certain sense, there is a kernel of truth to these claims: the struggle for freedom is an intrinsic danger to the existence of any oppressive regime. This is true in Tehran and Zahedan, and it is also true in Nablus and Jenin.

In Iran and in Palestine, people are risking their lives to be freed from oppression, from apartheid, from extreme deprivation of their most basic freedoms at the hands of powerful, uninhibited forces. Solidarity with the Iranian people’s struggle for liberation that at best ignores the Palestinian struggle and at worst actively supports crushing it is nothing more than pure mockery of the very idea of freedom.

Take, for example, the hollow gesture by MK Sharren Haskel from the National Unity Party, who, during her speech at the International Christian Embassy Jerusalem’s annual conference, took out a pair of scissors and cut her hair in solidarity with Iranian women. “As a fighter in the IDF, I salute the brave women and their children who are fighting for their home and their future,” Haskel told the crowd a moment before the pompous gesture.

This is the same Haskel who backs the annexation of the West Bank and the suppression of Palestinian freedom. Now, she too can join the world’s freedom seekers.

Many have recently asked me what can be done to support the brave women of Iran. Here is the incredibly simple answer: the most effective way to support the uprising is to stand by the people who are fighting for their freedom here, close to home, where we, Jewish Israelis, are responsible for the oppression. Because freedom is, and must be, a universal concept, and a fight against its denial anywhere in the world is a fight for its expansion in the entire world.

Rejoicing in solidarity with Iranian women while boasting about the oppressive measures that trample on the freedom and life of the Palestinian people is little more than hypocritical virtue signaling. And more than anything, it amounts to spitting in the face of every woman in the streets of Iran who, in the face of murderous subjugation, continues to chant: “women, life, freedom.”