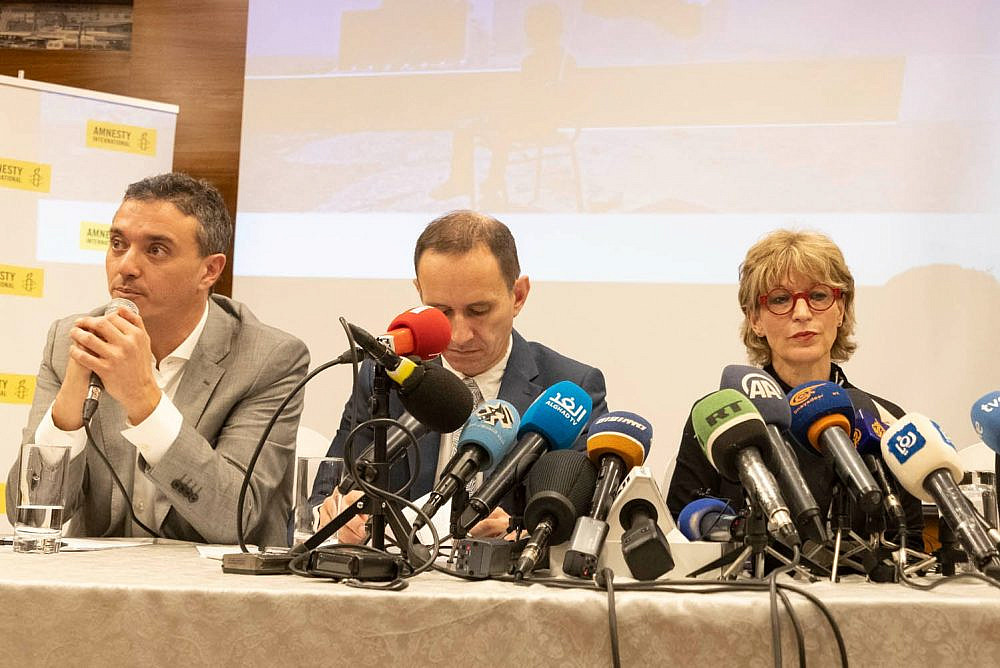 Members of Amnesty International hold a press conference in Jerusalem announcing the release of the organization's report on Israeli apartheid, February 1, 2022. (Oren Ziv)

On Tuesday, I had the privilege of hosting Amnesty International’s press conference, during which they launched and presented their new report, which labels Israel’s regime between the river and the sea “apartheid.” I’m not being just courteous here: it truly was a privilege to have a very small part in the efforts of a camp that refuses to fold in the face of Israel’s propaganda efforts, and insists on calling the reality in Israel-Palestine by its name.

Two things stood out to me in particular about my interactions with members of Amnesty International in recent days: the seriousness of their work, and their astonishment at the Israeli response, which accused them of antisemitism.

Amnesty, the largest human rights organization in the world, worked for four years on its 280-page report. The executive summary alone is dozens of authoritative, reasoned, consistent, and harrowing pages long. And yet, so-called experts — who I have no doubt have read not a single word of the report — have been busy slandering its findings and the organization itself. And that’s just the pundits. Official Israel seems to have gone completely off the rails, disparaging and defiling Jewish historical memory by hysterically waving the antisemitism card at every opportunity.

There is something incredible about the fact that Israel still manages to simultaneously insist that any demand to abolish its regime of supremacy is both a real threat to its existence and a slanderous act of Jew hatred. The state’s admission that it needs to maintain this regime should be enough to shock any decent Israeli to their core.

Here, too, the sheer volume of ignorance is appalling. I regularly follow the reports released by human rights organizations on Iran, including those by Amnesty, and I know firsthand how thoroughly and conscientiously they work on the countries Israel would have us believe Amnesty overlooks. And why does no one stop to ask themselves why Israelis insist on comparing themselves and their country to authoritarian states? How do chills not go down our collective spines every time we demand to be grouped alongside Iran, China, and Syria?

Perhaps most upsetting is that no one working for the Israeli propaganda machine stops to think for a moment that, perhaps, the members of Amnesty not only do not hate us, but are releasing this report also for our sake — for the sake of Jewish Israelis — so that neither we nor our children continue to live as the masters of a contemptible apartheid regime. That perhaps they want a better, more egalitarian future for both Palestinians and Israeli Jews.

Over the past week, I have seen up close just how rattled Amnesty’s leaders have been by baseless accusations of antisemitism. These are people who are deeply committed to human rights — people who despise antisemitism and fight it on a daily basis. They are certainly more committed to this fight than Israeli governments that have hosted and whitewashed some of the world’s most blatantly antisemitic leaders.

During my opening remarks on Tuesday, I said that the release of the report was a sad day for me as a Jewish Israeli. This report reflects an incredibly grim picture. Instead of punching at the mirror, I hope that we finally work up the courage to stare reality in the face — and try to change it. For the sake of all our children.