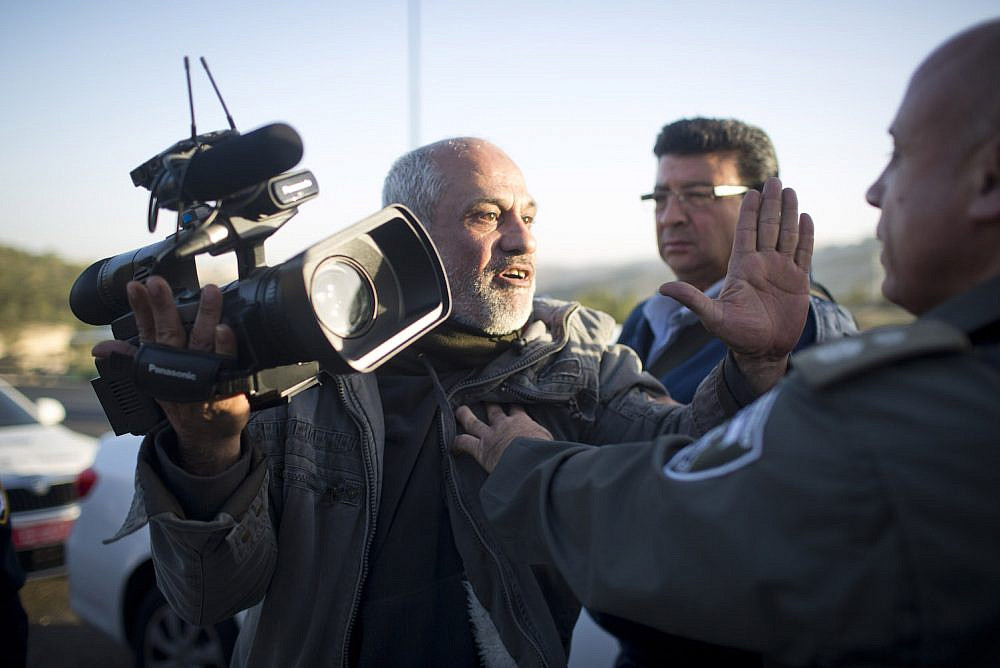 In recent years, Israel’s effort to erase the Green Line and normalize its control over the occupied West Bank has gone into high gear. As part of its rebranding project, the north of the West Bank is being marketed as the Israeli Tuscany, full of micro-wineries and bed and breakfasts; school children are being taken on tours to the Cave of the Patriarchs and the Jewish settlement of Hebron; Habima, Israel’s national theater, is putting on performances in newly-built halls in settlements; and the University of Ariel, in the heart of the West Bank, has been accepted to the Israeli Committee of University Heads.

Last month, the Ministry of Education even forbade Tel Aviv Municipality from using school maps that show the border between “Judea and Samaria” (the biblical name used to describe the West Bank in modern Israeli discourse) and the rest of the state.

Naturally, these efforts are being directed at Israeli citizens, while excluding the Palestinian residents of the West Bank. It is as if the roads and freeways on which Israelis travel in the West Bank, which bypass Palestinian towns and villages, have become a metaphor for something bigger: the ability to maintain a thriving society while ignoring millions of people — subjects of a military regime — who are held without rights behind walls and fences in a prison-like reality. The civilian nature of this effort demonstrates how the cancer of the occupation has spread to every corner of society; no one is immune.

Some moments are especially grotesque. Several months ago, the heads of the Israeli film industry traveled to the West Bank for the first ever Samaria Film Festival. Israeli Culture Minister Hili Tropper, a former member of the Labor Party who switched his allegiance to Defense Minister Benny Gantz, announced on stage that the Jewish-only festival represented the pluralism of Israeli society. Meanwhile, Moshe Edri, one of the biggest names in the Israeli film industry, promised to bring the Ophir Awards — the Israeli Oscars — to the West Bank.

The star of the evening was the head of the Samaria Regional Council, Yossi Dagan. Dagan, a politician with excellent ties to the evangelical right in the United States, has spent the last years spearheading the occupation’s cultural and economic normalization. Three years ago, he convinced the Likud-led government to launch the Samaria Film Fund, which finances and promotes film productions in the West Bank. Palestinians living in the area are banned from applying to the fund, since nobody but Israeli citizens can receive funding from government coffers. During a Zoom meeting held by the Israeli Documentary Filmmakers Forum (of which I am a member), the fund was presented, among others, as a potential source of grants.

Following these developments, a group of filmmakers distributed a letter committing neither to take money from the Samaria Film Fund, nor to participate in events or activities directed at the normalization of the occupation. “The Samaria Fund [is] part and parcel of the mechanisms of apartheid,” the letter read. “In an ongoing reality of occupation, and a creeping process of annexation, we must draw a red line.”

The initial letter garnered 140 signatures, including from some of Israel’s most celebrated directors such as Ari Folman (Waltz With Bashir), Rachel Leah Jones (Advocate), Guy Davidi (Five Broken Cameras), Nadav Lapid (Ahed’s Knee), Keren Yedaya (Or), and Eran Kolirin (Band’s Visit). Since then, the number has grown to almost 400. You can read the full letter and the list of signatories here.

Dagan, who also serves as the head of the Samaria Film Fund, accused the signatories of racism against “half a million Israelis living in Judea and Samaria.” Several dozen film and TV industry members signed a counter-petition. Minister of Culture Tropper responded to the letter by protesting the mixing of politics and art. “The Samaria Film Fund operates according to state law,” Tropper said.

Tropper is right. In Israel, the occupation is “normal,” “non-political,” and has to do with “the rights of half a million Jews.” Meanwhile, any opposition to it is deemed at best political and at worst racist (or, when directed from abroad, antisemitic). Fighting this twisted framing is one of the most urgent tasks in Israel. The filmmakers’ letter registered a brief success when suddenly Israel’s cultural world was forced to discuss the occupation.

Culture is politics, and has always been. In a reality of permanent military control over millions of people, Israelis (along with everyone else engaging with Israeli society) need to confront the ways in which each and every one of us is complicit in the occupation — as well as the many opportunities our privileged position allows us to resist it. My hope is that the filmmakers’ letter is more of a beginning of something new than an end.