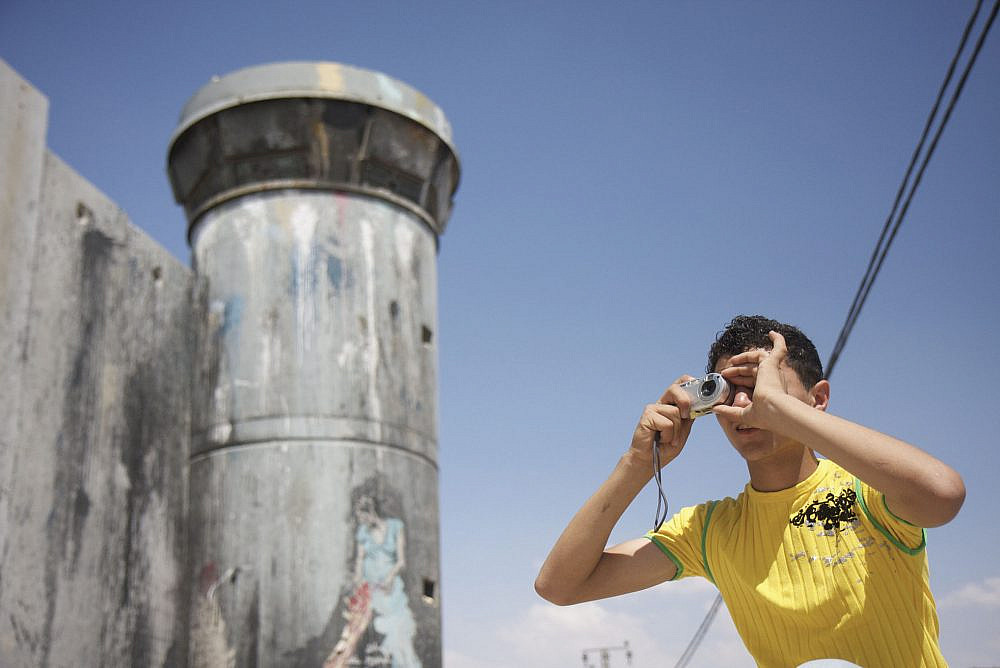 A Palestinian takes a picture near the separation wall in Aida refugee camp as part of a photography program for young Palestinian refugees, May 23, 2009. (Anne Paq/Activestills)

The Israeli Foreign Ministry has had a rough week.

In a joint investigation last Thursday, +972, Local Call, and The Intercept exposed a secret Shin Bet dossier that showed Israel has yet to provide foreign officials with any serious evidence to justify outlawing six leading Palestinian NGOs as “terrorist organizations.” Although the Israeli army signed an order on Sunday to formally enforce this decision in the occupied territories, the government is facing increasing scrutiny from journalists, diplomats, and politicians over the baselessness of its move.

Monday morning brought two more public blows. In a disturbing report, The Washington Post revealed that the Israeli military is employing a mass surveillance program called “Blue Wolf” to monitor Palestinians in the West Bank through facial recognition technology. The report, informed by ex-soldiers who gave their testimonies to anti-occupation group Breaking the Silence, noted that army units even “competed” with one another to forcibly gather photographs of as many Palestinians as possible, including children.

That same morning, the human rights group Front Line Defenders released an investigation, corroborated by Citizen Lab and Amnesty International, which found that the devices of six Palestinian human rights workers had been infected by the notorious Pegasus spyware; three of the targets were members of the recently outlawed organizations. Less than a week earlier, the company that produces the spyware, the Herzliya-based NSO Group, was blacklisted by the U.S. Commerce Department as an entity whose activities run contrary to American interests.

It is doubtful that Israel will face political consequences for these affronts any time soon; its allies in Washington, Brussels, and other capitals have long shown they are either too timid or disinterested to hold Israel accountable for its abusive practices. Even after NSO’s blacklisting, the U.S. State Department quickly clarified that it will not be taking action against the Israeli government on the matter — despite the fact that NSO’s operations, including its exports to foreign clients, require the close oversight and approval of the Defense Ministry.

The back-to-back revelations, however, have made it harder for the world to ignore the growing dangers of Israel’s unchecked power. Palestinians have long warned that Israel has turned the occupied territories into a “laboratory” for weapons and surveillance technologies, invoking a narrative of “counter-terrorism” to serve as a guise for domination. The international community has repeatedly paid no heed, blindly accepting Israel’s dubious arguments and prioritizing the need to defend “Israeli security,” without considering what it meant for “Palestinian security.”

Now, those states are realizing that Israel’s authoritarian methods are spilling onto their own turf. The Bennett-Lapid government is criminalizing civil society groups that Europe has funded for years, openly attacking one of the last pillars of the Palestinian state-building project in which Europe has staked its regional policy. Israeli technology, with the government’s knowledge, has been used to spy on senior officials like France’s president and has aided crackdowns by repressive regimes like Saudi Arabia. If officials thought Israel’s worst policies would at least be contained in its tiny slot of territory, they were deeply mistaken.

This past week’s revelations, among countless others before, should therefore be a stark lesson in the price of Israeli impunity. The Orwellian dystopia that Israel has constructed between the river and the sea — where tyranny is “security” and apartheid is “democracy” — is by no means unique, but the legitimacy it enjoys among Western allies is wreathed with exceptionalism. The more foreign governments recognize that they have seen this type of regime before, the quicker they can mobilize the tools to stop it.