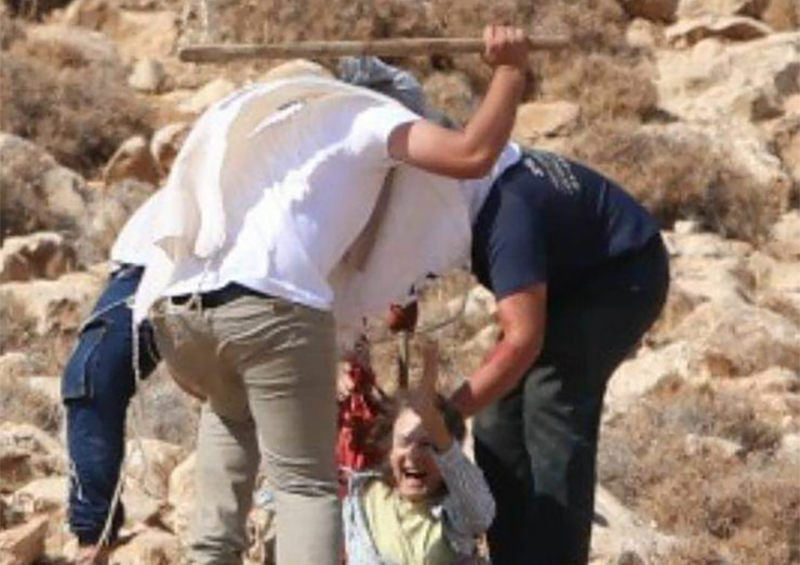 On Wednesday afternoon, a group of masked settlers lynched a 70-year-old Jewish Israeli woman who was accompanying a Palestinian farmer for the olive harvest in the occupied West Bank. Her name is Hagar Geffen. They attacked her with clubs until she bled, after which they beat her in the head with rocks.

She is currently hospitalized in Jerusalem’s Shaare Zedek Medical Center with broken ribs and a punctured lung. I wasn’t able to speak with her, but Yasmine, a Palestinian activist who was with Geffen, saw everything.

Below is Yasmine’s testimony from the attack. Her words are backed up by testimonies from three other people who were present during the attack, and with whom I also spoke.

When we approached the farmer’s land, there were eight settlers — teenagers — with clubs. They didn’t attack us, they only cursed. We passed them and saw that they had stolen all the olives and sprayed a toxic chemical on the trees in order to kill them.

They sprayed 180 olive trees. As a farmer myself, I know that this chemical first affects the leaves, then moves to the rest of the tree, and finally to the trunk. It kills everything.

Ibrahim, who is an elderly man, began crying and shouting. I quickly started pouring water on the trees in order to save them. I knew that it takes time for the chemical to kill them.

The eight settlers tried to expel us. We sang. We didn’t speak a word to them. We only tried to calm the farmer who could not stop crying.

Suddenly, dozens of people, more than 50 of them, descended toward us from the hills. All of them were masked, holding clubs, and some of them had machetes and knives. I saw two of them holding axes. They ran toward us and began throwing stones like crazy.

We had young girls with us. Teenage girls and boys, as well as the farmer and his elderly wife. No one expected us to be attacked like this. We are a group of volunteers that came to help farmers whose land is close to the settlement.

Hagar filmed everything. I think she thought they wouldn’t attack her because she is older and does not look Palestinian. They began to beat her mercilessly. Then they stole her phone, bag, and camera.

I saw how they dropped her body on the large rocks and then beat her with their clubs. All while they held her down. She really screamed. Some of them brought over rocks and dropped them on her head. They struck her with clubs in the leg, in the back, and repeatedly in her chest. It lasted a long time; there are photos to prove it.

Every time I tried to get closer, another group of settlers threw stones at me and I could not approach. I saw the axes and the knives and knew that if they caught me, they would stab me. We were only 20 people — they were dozens, all of them young. The farmer and his elderly wife barely escaped. I was with them, trying to help them.

I feel a lot of guilt that Hagar was left there. That we left her there. She bled for a while until an Israeli ambulance arrived.

In the immediate aftermath, settlers began spreading lies about what happened, including telling the media that they were the ones who were attacked. That two settlers had been wounded. That a group of “anarchists and Arabs” were causing trouble. One Israeli outlet even referred to the incident as a “confrontation between settlers and left-wing activists.”

I do not know whether the attackers were indeed wounded, but if they were, then it happened as they were busy lynching a 70-year-old woman. I also know that later that night, settlers attacked a group of Israeli soldiers near Nablus, wounding at least four. That particular act of violence was roundly condemned, from Prime Minister Yair Lapid to far-right MK Itamar Ben Gvir.

The Israeli army said that attacks against soldiers by settlers “who are being protected by them, is unacceptable behavior which must be vigorously stamped out.” Not a word was spared for the Palestinians or for those in solidarity with them, who have been facing an increase of settler violence over the last weeks.

I think about the Israelis of my generation who know nothing about the horrors of Israel’s apartheid regime, or worse, know and simply let them happen. What needs to change for them to do something? Why is a 70-year-old woman lying in a hospital? Do they not see what is happening around us? How did we create such a violent regime of colonialism and Jewish supremacy here?