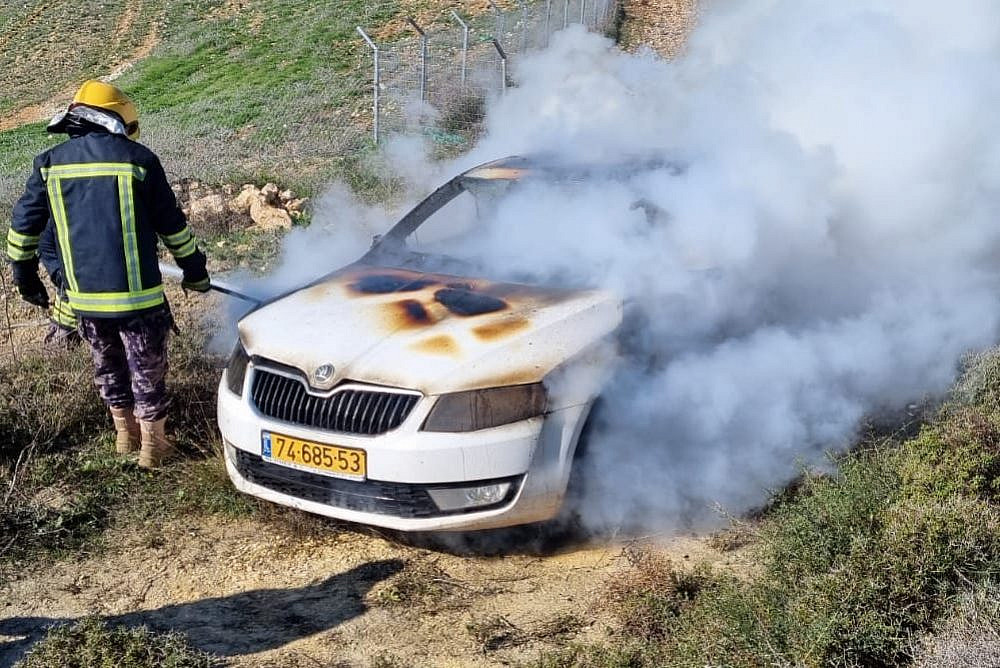 A Palestinian firefighter puts out a blazing car that had been set on fire by settlers in the Palestinian village of Burin, West Bank, January 21, 2022. (Courtesy of Yesh Din)

On the morning of Friday, Jan. 21, a group of mostly Jewish Israelis drove up to the village of Burin in the northern West Bank to accompany farmers as they planted olive trees. The action, which was led by the Olive Harvest Coalition (whose members help protect Palestinian farmers) and Rabbis for Human Rights, is a fairly common occurrence in the occupied territories. This is particularly true in Area C, under full Israeli military and administrative control, where Palestinians routinely face both settler and army violence.

Just over an hour after the volunteers began planting, settlers from the nearby outpost of Givat Ronen, which was built illegally even according to Israeli law, came down and began attacking the activists, sending at least eight to the hospital.

Public Security Minister Omer Barlev denounced the incident, which was partially captured on video, as a “terrorist attack.” Yet despite the unusually severe language from an Israeli official, a week later, not a single perpetrator has been caught.

The violent episode was only the first in a string of settler attacks last weekend. During the weekly protest against expulsions in Sheikh Jarrah, a well-known right-wing activist pepper-sprayed demonstrators, and another right winger pulled what was likely a pepper spray pistol on the protesters. The following day, settlers from the notoriously violent Havat Ma’on outpost in the South Hebron Hills entered Palestinian agricultural areas in the village of A-Tuwani, and later threw stones and threatened Palestinian farmers and left-wing activists. On Jan. 24, settlers threw stones at Palestinians and Palestinian-owned businesses in the town of Huwara just south of Nablus, during celebrations marking the release from prison of a settler who had been convicted of assaulting Palestinians last year. At least three Palestinians were wounded in the attack.

These assaults are merely a blip in a year that has seen an increase in settler attacks on Palestinians in an attempt to drive them off their land. Over the past year, +972 and Local Call have uncovered a number of cases in which settlers and soldiers worked in tandem to kill Palestinians across the West Bank.

For this week’s newsletter, I spoke to Daniel Roth, a co-founder of Solidarity of Nations — Achvat Amim, a movement-building platform that directly engages with the reality on the ground in Israel-Palestine, and one of the activists who was in Burin that day (and who was wounded by a rock thrown at him by a settler). We talked about what he witnessed, the purpose of settler violence, and what activists can and should be doing to protect themselves.

Tell me about what happened that day in Burin.

We headed up to the village that morning with the idea to plant olive trees with some of the farmers there. The particular plot we were on was on the edge of the town, up on the hill, directly under the settler outpost of Givat Ronen, just east of Burin. Four years ago, the Palestinian owner of the plot was threatened by the outpost security guard, and was told that if he dared work the land they would “get him.” Because the farmer had not been cultivating the land for years, he thought this would be an opportunity to try and go back to it. This threat was hovering over the farmer for years, and of course, the settler-terrorists made good on their threat and came down to attack us. 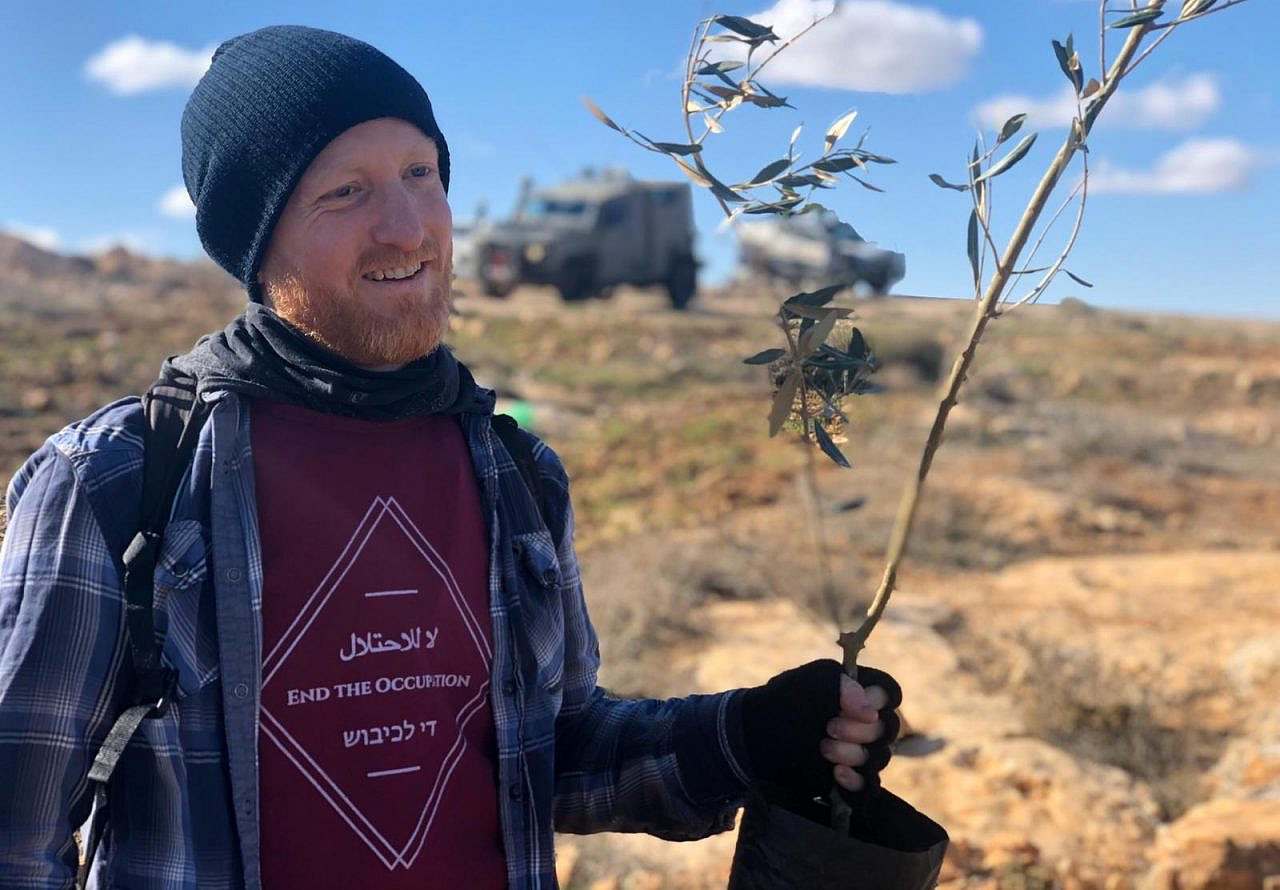 We were just finishing up planting around 50 trees on that particular plot. We looked up and there were between 15-25 settlers running down with their faces covered, carrying large stones, clubs, and a canister of gasoline. They immediately went for the two cars, which belonged to the volunteers, and began smashing the windows. One of the cars was full of volunteers who managed to escape. As for the other car, the owner was near it when a settler poured gas all over the outside and inside before setting it on fire. As the car burned, the settlers immediately turned their attention to whomever was within reach. They began pummeling the volunteers with clubs, throwing rocks at people’s faces — including mine — and hitting people over the head, which sent at least eight people to the hospital. The person who organized the action remained in the hospital for 48 hours after getting surgery on his hand.

At some point, the settlers ran up the hill and disappeared. The first people to arrive on the scene were actually Palestinian firefighters who came and put out the burning car and removed people from the vicinity, since the vehicle was beginning to explode. The Israeli army showed up some time after, and looked at a couple of head wounds.

Did the activists file a complaint against the settlers?

A few, including myself, lodged complaints.

Have any of the settlers been arrested or taken in for questioning?

Not that I know of. On Wednesday night, a few settlers from Givat Ronen attacked a Border Police officer and slashed the tires of his vehicle. This happened after the army announced it would demolish a few structures in the outpost following the settler attack.

What was going through your mind as the attack was taking place?

It’s hard to remember exactly what is going on in your head when you’re under attack, and it’s not the first time I’ve been attacked by settlers. Looking back, part of me was worried about making sure that people were out of reach from the settler-terrorists. When I saw someone who was immobile, I went over to be with them.

I’ve watched the video I filmed over and over and over again to see what it is I saw in the moment. There is this particular moment where you see the settler pouring gasoline over the car as if it’s nothing. At some point the owner of the car, who is clearly older, goes over to try and either reason with the settler or protect his car. The settler, without thought or apprehension, just swings his club straight into the head of the car owner. This could have killed him.

Today I was among those attacked by Jewish terrorists who descended on a group of volunteers planting trees in the Palestinian village of Burin in the occupied West Bank. They had bats, stones, and gasoline. Multiple injured. Blood on my phone as I type this. pic.twitter.com/dgKioKOpuK

I keep looking at that moment. It takes me back to the feeling of being surrounded by violent people with whom one cannot reason. It’s a frightening feeling.

Can you place this particular attack in the wider context of settler violence?

Settler violence is increasing, both in my experience and statistically. It’s important to pause and say that for Palestinians, this violence a daily reality. The people who were hurt in this particular attack happened to be Israeli Jews, which is why it got the media attention that it did. Palestinians experience this kind of violence day in and day out in the occupied territories, both from settlers and the army. It’s systemic top to bottom.

So while it was particularly horrific for me to experience, this attack was part of a larger system that operates to keep Palestinians living under fear of violence.

How should we understand the function of settler violence as part of Israeli rule over the occupied territories?

First of all, it’s not only settlers who are acting violently. The overall aim is to force Palestinians out of their homes, particularly in Area C, and out of the country completely, or at the very least into the Bantustans of Area A [under Palestinian Authority rule] to further limit where they can go or their access to resources. This is all part of the larger, ongoing policy of taking over maximum land for Israel and limiting as much as possible the number of Palestinians on that land. That’s the overarching policy, and it’s the platform upon which settler violence exists.

I try to keep in mind that both of these things are true: that this is the daily reality for Palestinians living under occupation and apartheid, and that this particular attack was horrific for me and everyone who went through it. I don’t think any of us — Jewish volunteers or Palestinians from Burin — will soon forget it.

What is the role of the army and the police when these settler attacks occur?

Most commonly, the army acts as something between an enforcer and an enabler during settler attacks. Their default is to believe the settlers. Videos from the South Hebron Hills show soldiers playing on their phones as settlers attack Palestinians. I personally have seen police officers look on as settlers committed arson on a cave [in which Palestinians live] in the South Hebron Hills. Sometimes you might run into a commander who is a bit more thoughtful or wants to keep things calm on that particular day, but the occupation does not run on the rule of law. It is a military dictatorship.

Is there training that activists undergo before they go out into the field about how to deal with violence by settlers or the army?

On a tactical, strategic, ideological level, it is important for people engaged in this work to fully understand the thinking behind nonviolence resistance and why to use it. There are many people who would say, “Well why don’t you just hit the settlers back?” or “Of course you had to stay in the field — you had to protect the trees.” What they don’t realize is that the power structure as it is set up right now does not allow us to protect the trees. You can’t protect the trees as long as the occupation exists. You need to plant them knowing they may be uprooted the next day, because that’s what the Palestinian farmers you’re accompanying are asking for. You have to know that you might have to protect yourself in the moment by hitting back, but what that’s actually going to do is bring the full power of the state down on the Palestinians you’re standing with — not on you.

One thing that drives me is the idea that we’re engaged in this movement because the future that we see is one of equality and justice and self-determination for everybody. The future the people out there trying to hurt believe in is a future for them and them only. That is why it is so deeply important to understand the ideological, strategic, and tactical aspects of what nonviolent resistance means, and what it means to build a movement in solidarity with people living under this regime.