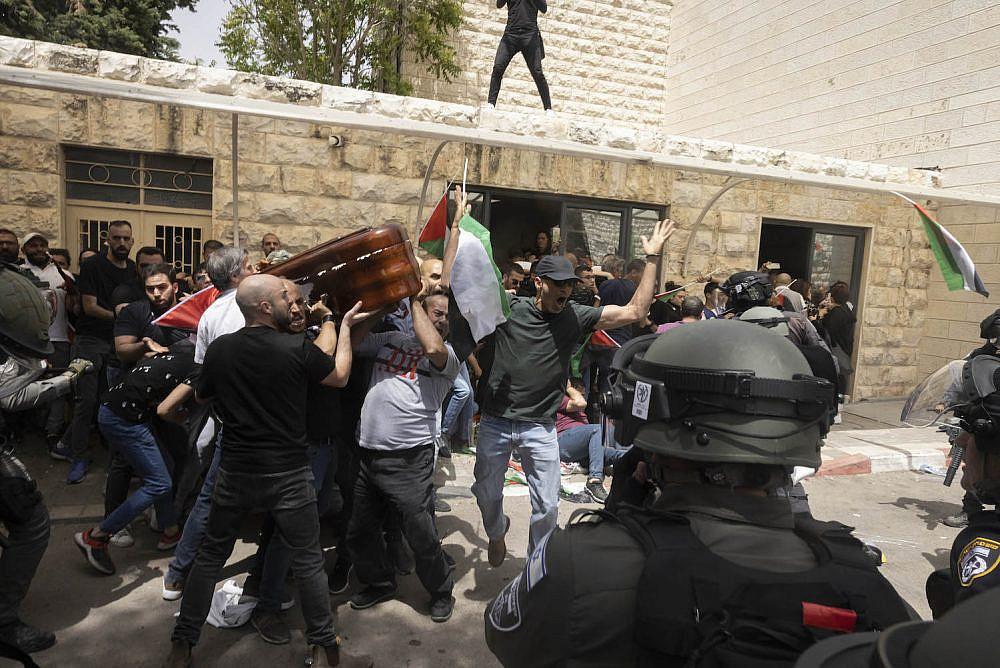 I’ve documented my fair share of political funerals, but never have I witnessed what occurred as Shireen Abu Akleh’s body was laid to rest on Friday in Jerusalem. Despite the visible grief of Abu Akleh’s colleagues, who worked with her in the occupied West Bank and Jerusalem, and the other Palestinians in attendance who had regularly tuned in to her reporting over the years, the Israeli police’s behavior during the funeral procession was brutal, even by their very low standards.

Despite the documentation, which clearly shows the police attacking the pallbearers and mourners, the Israeli media, as well as a number of prominent international media outlets, continue to refer to what took place as “clashes.” Perhaps, then, it would be useful to set the record straight.

On Friday morning, hundreds of people — Abu Akleh’s family members, friends, journalists, and others — gathered in the courtyard of St. Joseph’s Hospital in the Jerusalem neighborhood of Sheikh Jarrah. The police immediately put up barriers around the perimeter of the neighborhood, preventing many from entering.

At noon, mourners held an Islamic prayer followed by a Christian one. After the prayers, dozens of people waved Palestinian flags and chanted as Abu Akleh’s body was brought out for the funeral procession, an act the police deemed “incitement.” The officers warned that should the chants continue, they would disperse the crowd.

At around 1 p.m., when a hearse arrived to take Abu Akleh’s body to its burial place, some of the Palestinians in the procession announced that they wanted to carry her on foot — as is customary during Palestinian political funerals — to the Old City, and from there to be buried in Mount Zion Cemetery. Police tried to force the family to arrange for the body to be transported in advance, but from the public’s point of view, the funeral should have taken place according to the family’s desires, not those of the police.

By now, the images of what happened next have spread far and wide, shocking the world. As the coffin was removed from the morgue, hundreds began marching toward the exit gate of the hospital, where dozens of riot police officers armed with batons were waiting for them. The police began brutally beating the mourners as they carried the coffin, almost causing it to fall. Contrary to police claims, no stones had been thrown. Only after the officers tried to disperse the crowd with batons and stun grenades were several objects, mostly bottles, thrown at them.

The attacks continued. Soldiers fired sponge-tipped bullets and threw stun grenades until, 15 minutes later, the body was whisked away in a vehicle. Even after that, the police did not allow Abu Akleh’s colleagues — who were not only there to report, but also to mourn — to leave the hospital yard, beating them once again with batons. As the vehicle made its way from the hospital yard, a police officer was seen removing the Palestinian flags that were draped on it. Only an hour later was everyone allowed to leave.

The conduct of the police was not surprising; it was merely a blatant demonstration of the racism, brutality, and humiliation that Palestinians routinely face in East Jerusalem and beyond.

At an event of this magnitude, though, one could have expected Public Security Minister Omer Bar-Lev or Prime Minister Naftali Bennett to ensure that the procession be allowed to take place undisturbed. Yet it seems that both the police and, likely, the political echelon decided to clamp down on the funeral and its unabashed expressions of Palestinian identity in a city where even waving a Palestinian flag is beyond the pale.

In an attempt to justify the police’s conduct, Police Spokesman Eli Levi released a partial video, taken from the police drone camera, showing the events in the hospital yard. Levi claimed that objects were thrown before the dispersal began. Yet the video begins only after the police force had already stormed into the hospital compound and started attacking people.

Unsurprisingly, the parts where the police storm with batons were entirely cut out. Synchronizing the drone footage with video footage from the ground shows, for example, that one of the people alleged to have thrown stones was in fact waving a Palestinian flag.

The disgraceful conduct of the police continued even after the initial aggression at the hospital. In Sheikh Jarrah, police prevented mourners from marching, and many “flying checkpoints״ were set up around the Old City in order to prevent people from attending the final part of the funeral procession.

Later, Palestinian residents were asked by police whether they were Christian or Muslim in order to decide whether to let them enter the cemetery for the burial; Palestinian flags and Arabic signs were confiscated; officers tried to force a young woman to remove her hijab because police said it had the colors of the Palestinian flag; and when several young people climbed the walls of the Old City to observe the funeral, undercover police detained them in order “to look for flags in their pockets.”

The attempt to brutalize Palestinians into silence is doomed to fail. This was also the case with the placement of metal detectors at the entrance to Al-Aqsa Compound in 2017, and again last year with the police barricades at Damascus Gate. This year, some were hopeful that the police had changed its attitude under the orders of the so-called “government of change,” but the violence at Al-Aqsa last month has already proven otherwise. The brutality that took place during Abu Akleh’s funeral was merely an extension of that.

Shireen Abu Akleh documented and broadcasted the occupation to millions. Her killing in Jenin Refugee Camp was symbolic of the Palestinian story as a whole, which she insisted on telling the world for the past 25 years. The conduct of the police at her funeral reveals that even in moments of mourning, and even when Israel itself admits the possibility that Abu Akleh was killed by Israeli soldiers, it has no intention of allowing the Palestinians to say their goodbyes with dignity.