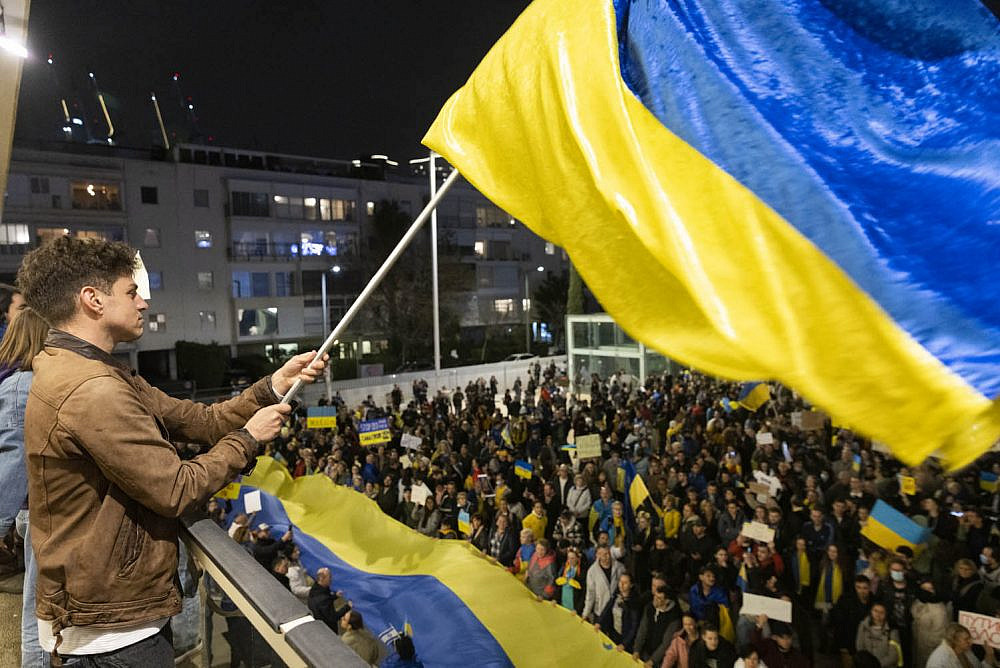 On Saturday night, two days after Russia launched its invasion of Ukraine, thousands of Israelis, most of them from former Soviet republics, took to the streets of Tel Aviv. Draped in Ukrainian flags, they marched through the city with a clear message: Vladimir Putin’s war must be stopped. The protest was one of many across the world that sought to hold the Russian president accountable for his belligerent attempt to occupy and usurp an entire neighboring country.

Israelis’ sympathy for Ukrainians has resonated far beyond Russian speakers. As Putin’s tanks rolled forward, a single, unifying note-to-self began to emanate from various flanks of the Israeli media: “We have no one to depend on but ourselves.” The slogan, which is deeply embedded in the Israeli psyche, is based on the idea that our existence as Jews has never been guaranteed, and that finally, under a nation-state of our own, we are able to shield ourselves from anyone who seeks to destroy us.

There is a good reason why this slogan resonates powerfully with so many Israeli Jews. The history of vicious antisemitism around the world — including in Ukraine, where Jews faced some of the worst pogroms of the last century — is not ancient for many of us or our families. In that sense, the intuitive sympathy for Ukrainians held by many Israelis is sincere: who, if not we, know what it feels like to face tyranny of the kind being meted out by Russia?

An obvious answer, unfortunately, has not registered among most Israelis.

Whatever affinity they may have for Ukraine’s struggle, the notion that Jewish Israelis cannot trust anyone but themselves not only stokes their most ultra-nationalist tendencies, it is simply unfounded. From the early years of the Zionist movement, Israel has existed in great part because of the magnanimity of others: the state was established with the political, financial, and military support of great powers like Britain, and its conquest of Palestine in 1948 was quickly legitimized in the United Nations. Foreign sponsorship continued in the ensuing decades, including with a nuclear reactor provided by France in the 1950s, American aid during the 1973 Yom Kippur War, and $3.8 billion in military funds a year from Washington.

Those same world powers have for decades granted Israel carte blanche to occupy foreign territories like Lebanon and to impose an apartheid regime over Palestinians between the river and the sea. In contrast, they have repeatedly castigated and punished Palestinians for speaking out, protesting, and taking up arms — doing precisely what any other oppressed people would do — against their occupier. That Israeli Prime Minister Naftali Bennett has deliberately refrained from casting Russia as the aggressor, for strategic and geopolitical reasons, does little to conceal that double standard.

Russia’s invasion ought to have been an important mirror for Israeli society — if only the vast majority of Israeli Jews were brave enough to stare into it. Although many Israelis still see themselves as a vulnerable nation surrounded by enemies, they are actually citizens of a nuclear-armed regional power propped up by Western states. Western countries, too, ought to look in that same mirror: while they are initiating swift sanctions to try and force back Russia’s invasion and occupation, they are simultaneously rejecting the very idea of sanctions against Israel’s occupation as not just way beyond the pale, but even antisemitic.

As the world rightly rallies behind Ukrainians, we must remember that solidarity with any people facing oppression doesn’t only mean marching in the streets for one cause alone. It requires taking this moment to have serious conversations about whom we are helping to fight for their freedoms, and whom we are abandoning to subjugation.