Palestinian journalists have published a petition aimed at pressuring Israel to grant them full freedom of movement and access in order to do their jobs, just as it allows Israeli journalists to work freely in Israel and Palestine. We at +972 support their petition and call on all of our Israeli and international colleagues to do the same.

By the +972 Magazine and Activestills collectives 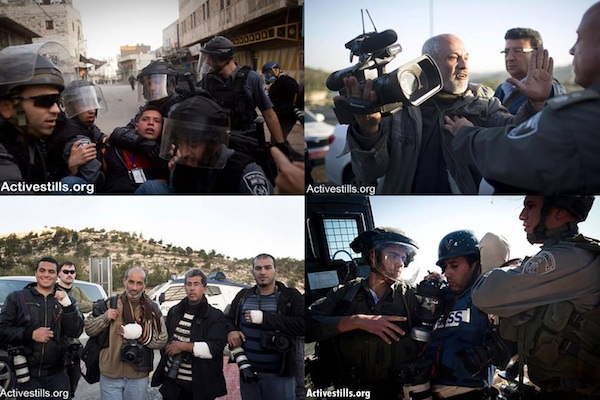 For more than a decade, Israel has placed serious hurdles in the path of Palestinian journalists, often preventing them from covering the news in their own territory and at times even putting their lives at risk.

Shortly after the Second Intifada began in 2000, the Israeli Government Press Office (GPO) stopped issuing credentials to Palestinian journalists, many of whom were veteran employees of international media outlets. GPO cards allow journalists to pass easily through checkpoints and gain entrance to press conferences and other events called by government and army officials. Most importantly, they offer protection in conflict zones and during clashes between security forces and civilians.

Palestinian journalists are routinely manhandled, beaten, arrested and even shot at by Israeli soldiers, then denied the right to due process in a civilian court. For freelance Palestinian journalists and those working for international news organizations, job opportunities are often lost because they are unable to cover events and interview officials. Even within the West Bank their freedom of movement is restricted. Moreover, they cannot enter East Jerusalem or travel to Gaza, where their own people live.

As the occupier and effective sovereign, the Israeli army and its civilian political commanders make decisions that directly affect Palestinians’ day-to-day lives. But Palestinian journalists are not given the access to report on those decisions, events, political personalities and the society behind them. The result is a troubling lack of freedom of information.

Across-the-board discrimination is unacceptable, even when states reserve for themselves the right to determine who may enter their territory based on security considerations. All journalists residing in and reporting on events that occur in territory controlled by Israel should have the same human and professional rights.

Thus we at +972 Magazine call on the Israeli authorities to grant Palestinian journalists the same freedom of movement, access and protection enjoyed by Israeli reporters, in accordance with the Universal Declaration of Human Rights, the International Covenant on Civil and Political Rights and the International Convention on the Elimination of All Forms of Racial Discrimination.

We stand in full, unequivocal solidarity with our Palestinian colleagues and support their petition demanding the ability to freely travel in order to work as journalists. We call on all Israeli and international news organizations and journalists to do the same.

Freedom of the press, freedom of movement, freedom of information and freedom of occupation are inextricable, vital components in the struggle for democracy, peace and civil and human rights. These are principles we are unable and refuse to compromise on.