In what is likely the first statement of its kind, Egyptians and Israelis call upon their governments to exempt conscientious objectors from mandatory military service. 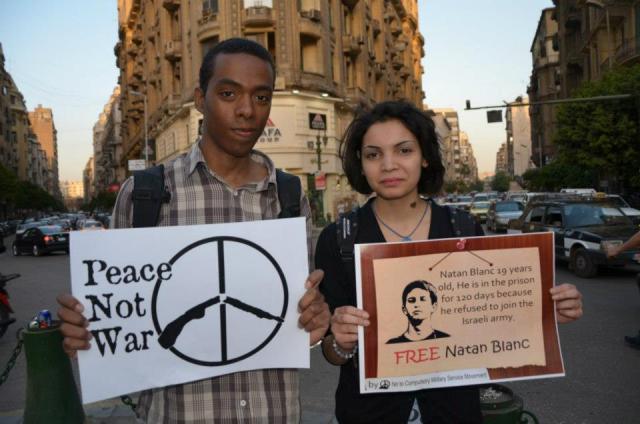 A small group of young Egyptians gathered in downtown Cairo for a vigil yesterday, the likes of which have probably never before been seen in any Arab country. The group held signs calling for the release of Israeli draft resister Natan Blanc, who was recently sent to prison for a record-breaking ninth consecutive sentence. According to Israeli movement Yesh Gvul, the gesture was highly appreciated by Blanc’s family.

The Cairo vigil is part of a new type of cooperation between the Israeli feminist and anti-militarist movement New Profile (in which I myself am an activist) and the Egyptian group, No to Compulsory Military Service – a movement which was started by Maikel Nabil Sanad, the first known Egyptian conscientious objector. Nabil Sanad was imprisoned briefly in 2010 and once again right after the revolution for criticizing the army in his blog (he was only released following a hunger strike and public and international pressure).

In the joint message published by the two groups, they write:

The right to conscientious objection is one of the basic human rights, as the right to freedom of expression and life, and is recognized in international charters on human rights such as The Universal Declaration of Human Rights and The International Covenant on Civil and Political Rights (both signed and ratified by bothEgypt and Israel). Therefore, the movements No to Compulsory Military Service and New Profile call on both governments to respect international laws and meet their obligations to which they committed themselves in view of the international community, and to recognize the right of Natan Blanc, Emad el Dafrawi and Mohamed Fathy to conscientious objection to military service.

While Blanc has been in prison for more than 130 days, the Egyptian draft resisters are free. But according to local activists, “for more than a year they have been living without most of their civil rights. They are not allowed to work, study or travel. They are not even allowed to hold a travel document.” 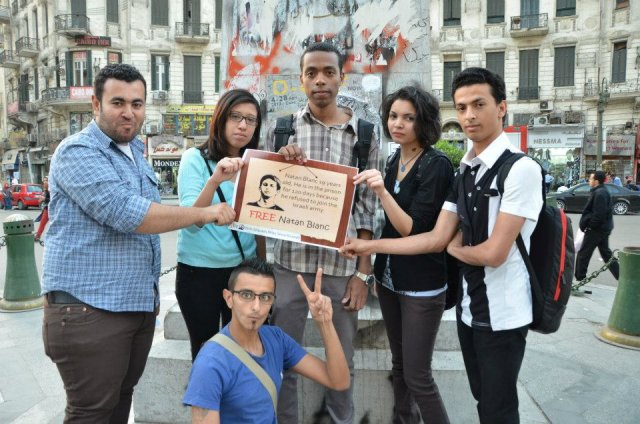 It should be noted that such joint statements and actions are extremely rare, as Egypt’s mainstream and elite politics is by far more opposed to normalization with Israel than are many other countries, including Palestine. Nabil Sanad has himself been highly criticized, even within the Egyptian anti-militarist left, for his willingness to cooperate with Israelis. He was especially criticized when he broke the Palestinian academic and cultural boycott call by visiting Israel and lecturing at official university events here. It will be interesting to see whether this new cooperation between the two movements has any effect on the chances of a wider exchanges of ideas and support across the border, 31 years after the last Israeli soldier left the Sinai Peninsula to make way for a cold yet stable peace.