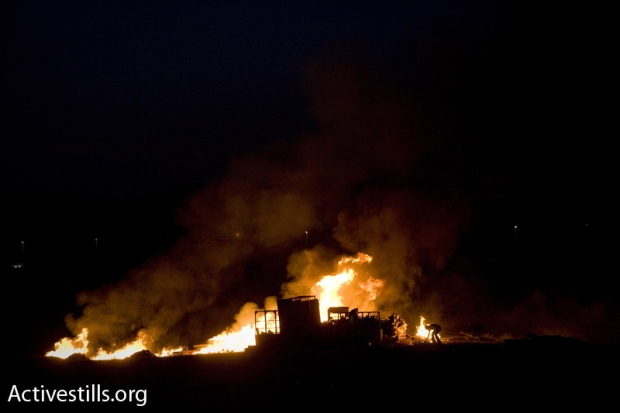 A couple of days ago, when the news cycle was dominated by the story of the IDF helicopter crash in Romania, an entire village was destroyed in the Israeli southern desert.

El-Arakib, in the northern Negev, is one of more then 40 unrecognized Bedouin villages in the south of Israel. At down, hundreds of Israeli policemen and soldiers took the entire village – men, women and children – out of their houses, and let them watch in horror as the Bulldozers crashed their homes. the whole thing took just a few hours.

“The forces met only minor protest,” the Israeli media reported in the morning.

The unrecognized villages, many of them predate the establishing of Israel, are not receiving any services from the state: no water, no electricity, no transportation and no paved roads. Their children walk miles in the heat of the desert summer or in the freezing cold of the winter to get to school.

For decades, Israel is refusing to recognize the Bedouin claim for the land. A couple of years ago, an official inquiry committee, formed by the government and headed by a retired justice of the Supreme Court, recommended recognizing many of the villages and putting an end to the problem. The government buried this report, along with many other.

The Bedouins, once the proud natives of the south, are now the poorest population in Israel. Most of them used to serve in the IDF, but after the treatment they got from the state, many refuse army service these days. Crime rate in the Bedouin towns is on the rise, illiteracy and unemployment are the highest in Israel. Under such conditions, it is no surprise that the Islamic movement is getting stronger in the south. Nobody else would provide support, comfort and political empowerment for the local population. The Israeli response is to push the Bedouins harder.

A few years ago, the Israeli minister of infrastructure ordered the tiny fields of El-Arakib – out of which the locals barely make a living – be sprayed with poisonous chemicals from the air. This was the Israeli version of Agent Orange, used against our own citizens. The minister who sent the planes was Avigdor Lieberman. Today, he is the face Israel is showing the world.

On Monday night, when word of the evacuation came, some thirty Israeli activist rushed to the Negev, trying to stand by the village’s people. But there was nothing they could do against hundreds of soldiers and policemen.

This is from a report by one of the activists, posted the following day on Facebook:

Soldiers – facers covered – run into the village. Several residents and activists who were standing in their way are beaten, pushed back, thrown to the ground. A young woman pushes her way in, trips, falls onto the rocks, and cries out in pain. A soldiers stands over her, covered in black, face veiled, and laughs a laugh that I will never forget.

Bulldozers are razing the village now. They crush the tin shanties, uproot everything that stands in their path. The villagers watch, too tired even to shout. One of them cries out in pain when the bulldozer pulls the olive trees out of the ground. “Leave the trees, at least, what have they done wrong? We’ve been growing them for ten years now.” “You shouldn’t even have shade,” murmurs one of the policemen.

Here is a sad video of the events:

How is it that a government which claims to be unable to evacuate a single “illegal” outpost in the West Bank can bulldozer an entire village overnight? Social activist Gadi Elgazi has the answer: right now, anything not Jewish in Israel is under attack.

Why bring upon the people of el-Arakib this destruction? Just the day before the demolitions, the recent remarks of Prime Minister Benjamin Netanyahu regarding the proposed Loyalty Law were published. Netanyahu stated his position clearly:

“We are a nation state, which means that the overall sovereignty of the country is reserved for the Jewish people. […] Today, an international campaign is being waged against the definition of Israel as a Jewish state. I do not want to leave things as is [without a revised loyalty oath, GA], because we are under attack on this matter. The significance of these attacks is that various elements are liable to demand their own national rights and the rights of a state within the state of Israel – in the Negev, for example, if it becomes a region without a Jewish majority. This happened in the Balkans and constitutes a real threat.” (My emphases; Netanyahu’s declaration was included in Haaretz Hebrew edition (26.7.2010), but not in the English one)

The words are clear: the state belongs to the Jews, not to all its citizens. Full civil equality of its citizens – individual and collective – constitutes a threat. Then the mirror effect: imagined aggression (“under attack”, “real threat”) justifies actual aggression. The Bedouin in the Negev are transformed into a “real threat,” because something might happen there; Netanyahu doesn’t say what but refers to the Balkans. There were several cases of ethnic cleansings in the Balkans. Proponents of ethnic cleansing often explain that they are merely defending themselves from a minority group, whose very existence is for them a threat.

What are the Bedouin accused of? How did their very existence become a “real threat”? The Negev, says Netanyahu, might become a “region without a Jewish majority.” This is truly a good one: you can move from region to the next throughout the country and discover that in a particular area within Israel, there isn’t a Jewish majority, for example between Kafr Qara’ and Umm el-Fahem, or between Sakhnin and ‘Arabe. Well, then don’t we have to do something against this threat? Yes, of course, and so we do! Think about the project of establishing the city of Harish in Wadi ‘Ara, not as a solution to the housing shortage with which the current residents of the area must contend, and not as part of development plans that will benefit all residents of the region, but rather as an attempt to use the housing shortage of the ultra-Orthodox as a tool against the Arab resident of the area – while at the same time preventing Arab citizens from developing and expanding their own communities. Just like the lookouts that were established in the North to surround and divide, to combat the “threat” of Arab communities in the Galilee.

This is an ongoing war, a war of attrition against part of citizenry of the country, a war whose arsenal includes prohibitions of construction and orders of demolition, and whose soldiers are building inspectors and the Green Patrol.

And while all of this is going on, demands are made upon Arab citizens to perform national service and to prove their loyalty to a state that is not loyal to them. Just a few weeks ago, near Shoket Junction in the Negev, in the context of everyday home demolitions, a Bedouin Soldiers Club was demolished. So what’s the message? Clearly: No service, whether military or civilian, will guarantee equal rights. The Druze of the Galilee [who perform military service] don’t exactly enjoy equality, do they?

More photos from the evacuation here. Information on the Bedouins and the problem of the unrecognized villages can be found here.