Herzog and Bibi’s political interests and the fragmented Knesset that is likely to emerge after the elections might force Likud and Labor into a power-sharing deal. Avigdor Liberman and President Rivlin already support the idea. 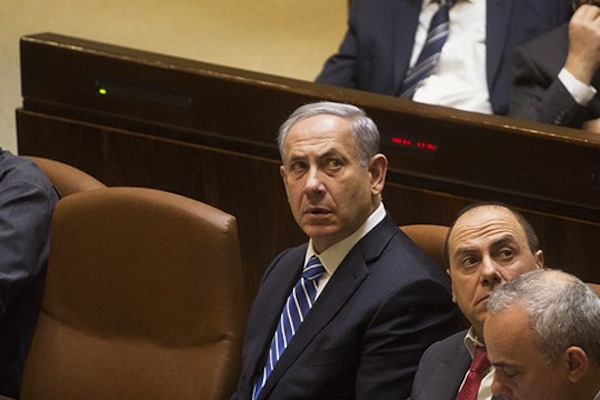 Will Netanyahu have to share power in the next government? (photo: Oren Ziv/Activestills.org)

The Israeli Labor Party, which will participate in the upcoming election under the banner of “The Zionist Camp,” held its primaries this week. Former party leader Shelly Yachimovich won second place (first place is reserved for party leader Isaac Herzog); Stav Shafir and Itizik Shmuli, two of the leaders of 2011’s social protest movement, were elected in top places. Altogether the list leans a bit to the left of what Herzog and Tzipi Livni, who will lead the party, would have liked to see. They run the risk of drawing support from the leftist Meretz rather than from the right, which they need in order to win a Knesset majority and form a coalition. The first few polls conducted after the primaries give Labor 25 seats – one ahead of Netanyahu’s Likud party.

Yet what matters most is not who wins more seats, but rather which Knesset member has the best chances of forming a government. The magic number is 61, and reaching it will prove more complicated than it has been in years.

Below is an average of recent polls (not including the last two, although the difference is insignificant), conducted by the independent Project 61. According to the polls, Herzog can count on roughly 41 MKs (from Labor, Meretz and the Arab parties, though the latter will likely not join the government), while Bibi begins with wither 39 (Likud and Naftali Bennett’s Jewish Home party) or 43 seats, in the case that former Shas stalwart Eli Yishai’s new party makes it into the Knesset. [UPDATE: several new polls are out – see at the end of this post].

The rest depends on the ultra-Orthodox (Shas and United Torah Judaism) and centrist parties – Liberman’s Yisrael Beitenu, Moshe Kahlon’s Kulanu and Yair Lapid’s Yesh Atid. Three of those parties will help either Bibi or Herzog become the next prime minister.

But the puzzle is not that simple. Lapid and the ultra-Orthodox can’t really work together (Lapid’s entire campaign was based on drafting the ultra-Orthodox, who are generally exempt from military service, into the IDF); it is not clear whether Liberman’s party will survive the recent round of corruption allegations, and there are many rumors regarding their pre-election agreements or commitments. It is clear, however, that the cost of getting support from centrist parties for either side will be much higher than in previous elections, when there was a clear winner and very few bargaining chips.

But there is one scenario in which all this horse trading doesn’t really matter: the formation of a national unity government (a situation in which one party does not have the margin sufficient to form a government, and must unite with rival political parties to form a coalition). In this case, Labor and Likud will have 47 seats or more (49 according to today’s polls), which makes obtaining 61 seats far easier – and cheaper. All Herzog and Bibi would need is the support of the ultra-Orthodox parties and Liberman.

And there is very little doubt they will join. Liberman already declared national unity as his preferred option (probably after realizing that in his newer, weaker position he will not be the kingmaker), and the ultra-Orthodox’s default position is in the coalition. They won’t stay in the opposition if they can help it.

Bibi and Herzog could decide to split the role of prime minister, as Prime Minister Yitzhak Shamir and Shimon Peres did in between 1984-1988, when each leader served two years as the head of the government. Ministerial portfolios will be allocated according to the relative power of each party.

Bibi knows that these elections are about him, and national unity would very much be in both his and Herzog’s interests. A national unity government would give Netanyahu another two years in power, after which he could either retire honorably or decide to run again, depending on the political circumstances.

Once Herzog becomes PM – even for a short while, in rotation with Bibi – he could always run again. For Bibi a national unity government is a good way out. For Herzog it is the prefect threshold for the next round, which could potential take place against former Likud minister Gideon Sa’ar. 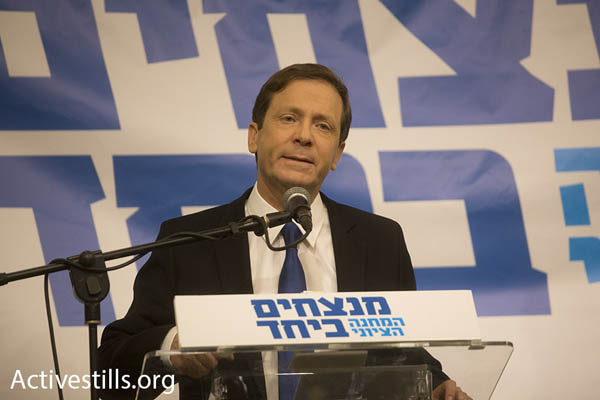 Some pundits claimed this week that Labor’s primaries will make it difficult for Herzog to enter into an agreement with Netanyahu, mostly because Yachimovich, Shafir and some other MKs are supposedly ruling out this option. But Labor also vowed to stay out of the government back in 2009 (Barak even said it on election night!) only to change its mind not long after. Yachimovich, who opposed that coalition agreement, chose not to join the small group of “rebels” who opposed and didn’t request a ministerial position. But neither did she join the MKs who refused to support the coalition. And that was the case when Labor was not even offered a rotation as the head of the government. Can anyone imagine Yachimovich or Shafir refusing what will be described as “a historic opportunity” to regain power for the first time since 2001?

The idea of a national unity government is already being discussed in various political forums. Liberman was the first to support it publically, but others might follow after the elections. Channel 2 recently reported that a source within the president’s circles said that in the case where there is no clear winner, Rivlin will urge party leaders to discuss a national unity deal.

As coalition horse trading continues, the “public demand” for an agreement that would put an end to “political blackmailing” of medium-sized parties will emerge (it always does). And from there on it is only a matter of deciding on who gets what in the new government.

There are those who think that national unity is a good idea. That together the big parties can solve the existential challenges that face Israel: peace, security, inequality. But in reality, the opposite outcome is much more likely. National unity governments cannot bring about substantial reforms on any issue, since their common denominator – the glue that holds them together – is an agreement on the status quo.

The most unlikely reform such a government will undertake has to do with the occupation, because Likud will simply not provide the necessary Knesset majority for any kind of agreement. Nearly every member of the party has vowed to oppose any kind of compromise, let alone the formation of a Palestinian state. While such a government may appear more moderate, and thus has a better chance of delaying some of the international measures being taken against the occupation (which are incredibly slow to take off in any case), the reality on the ground will stay the same – at best.

UPDATE: Several polls have been published since I wrote this post; the updated numbers are slightly more in Labor’s favor, but they don’t change a lot regarding the National Unity scenario. Here is an updated average of the latest polls, published by Project 61.