The Israeli prime minister called elections hoping to strengthen his coalition, but he underestimated the personal resentment many Israelis feel toward him. One shouldn’t, however, confuse the fierce competition for power with a battle over ideas: even if Labor wins, the end of the occupation is not around the corner. 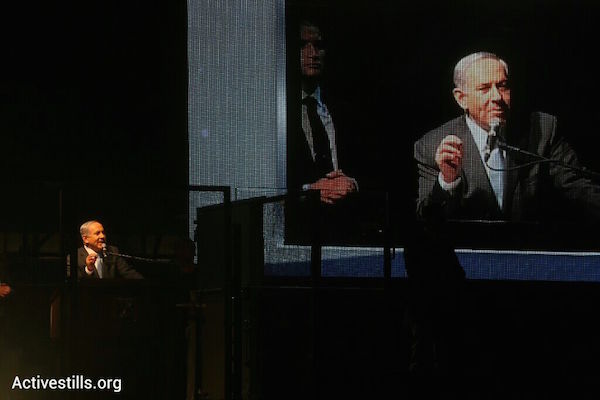 PM Benjamin Netanyahu speaks at a right-wing election rally in Rabin Square in Tel Aviv, March 15, 2015. (Oren Ziv/Activestills.org) With his numbers dropping, Netanyahu was forced to shift his campaign strategy. In recent days he has given more interviews to the Israeli media than he has in all of his years in power.

When Benjamin Netanyahu decided to fire Finance Minister Yair Lapid and Justice Minister Tzipi Livni and send Israelis to the polls for the second time in a little over two years, many people (myself included) defined these elections as “a referendum on Netanyahu.” Final results will only be in on Wednesday morning – possibly even later – but one thing is clear: Netanyahu’s goal – to rid himself of an unstable coalition and secure a clear majority – will be denied.

Instead, Bibi was forced to conduct the political battle of his life. In this campaign, he poked the American president in the eye, made all sorts of promises to just about everybody, declared war on the publisher of one of Israel’s largest dailies, and buried the Bar-Ilan speech, in which he expressed support for the two-state solution. If Bibi somehow becomes prime minister again, he will have many pieces to pick up. But all that is still far off. Right now, all Netanyahu wants is to remain in power.

Israelis will vote tomorrow on a single ballot — for the party they support. The polls close all over the country at 10 p.m. local (4:00 p.m. EST) — that’s when the exit polls will be published (including on this site). Modified polls will be published toward midnight; results are expected in the early morning. Final results and seat allocations might only come in on Thursday or Friday, once the votes from soldiers are counted (this process takes longer because the Central Election Committee needs to verify that no soldier voted twice — on base and at their home address).

Here are a few things to watch for during those days:

1. Netanyahu’s fate: A few days after the final results are published, the president – who is the formal head of state – will give the opportunity to form a government to the member of Knesset with best chances to succeed. So if a Knesset member can prove he has at least 60 other MKs backing him, he is likely to be granted this opportunity. But the law isn’t clear on this issue, and there are no rules for a scenario in which nobody gets 61. Netanyahu’s main challenger, Isaac Herzog, believes that in such a case, President Rivlin will hand the leader of the largest party the opportunity to form the government. His party (formerly Labor, now called “The Zionist Union”) built its campaign on an attempt to pull ahead of Likud. In the final pre-elections polls, The Zionist Union had an advantage of around four seats over Likud. Herzog, it seems, got what he wanted. But is it enough to form a government? This is where things get really complicated.

Netanyahu has the entire Right behind him (Naftali Bennett’s Jewish Home party, Eli Yishai’s Yahad and Avigdor Liberman’s Yisrael Beiteinu). He is also likely to get the support of the ultra-Orthodox parties Shas and United Torah Judaism (UTJ). Along with his own Likud party, this bloc polls around 53-55 seats. The anti-Netanyahu camp includes the Zionist Union, Meretz, the Joint List (which is the united list of the Palestinian parties) and probably Yair Lapid’s Yesh Atid party. Those parties will not align behind Netanyahu following the elections. They poll now at around 55 seats.

The 10 remaining seats (out of the Knesset’s 120) are held by Moshe Kahlon, a former Likud minister who hopes to become the next finance minister. Kahlon was careful not to reveal who he will support. If the election results are the same as the final polls, Kahlon will become the kingmaker of these elections. He can determine who will be prime minister. With a good enough showing, he might even be able to partner with Lapid and try to become prime minister himself, or make Lapid prime minister (though this is less likely).

But the polls might be wrong — recent elections saw shifts of up to 5 percent of the votes in the final 48 hours of the campaign. In such a case, the closer the anti-Netanyahu bloc gets to 60, the worse Netanyahu’s troubles get. If the opposition gets 60 or above, it means that Netanyahu has no path for forming a government, and he is likely to retire from politics immediately. On the other hand, the closer Netanyahu, the Right and the ultra-Orthodox parties get to 60, the less bargaining power Kahlon has, and the task of forming another government becomes easier for Bibi.

2. Herzog (I): The anti-Netanyahu bloc is not a government. Even if Netanyahu is denied a victory, Isaac Herzog might still have trouble forming a government. It is not clear whether the Joint List will support him (it will surly oppose Netanyahu, but it might not support Herzog); UTJ made it clear it will not sit in the same government with Yair Lapid; Liberman and Meretz will not go together … things are fairly complicated. This is why Herzog is not ruling out having Likud as his primary partner following the elections – with or without Netanyahu. But this option is also not without problems. In other words, if Bibi indeed loses the elections, things will get much more complicated. In the fragmented system that will emerge – comprised mostly of medium or small parties – nobody can be a clear winner. We could end up with a deadlock, an ongoing political crisis, or a weak government that might lead to another election in a year or two.

3. Herzog (II): Labor’s leader is not an impressive candidate. He ran a confused campaign that was fed mostly by the anti-Netanyahu sentiment unleashed in the past few weeks. Even worse: his opinions and ideas are as unclear as they were three months ago – or three years ago, for that matter. 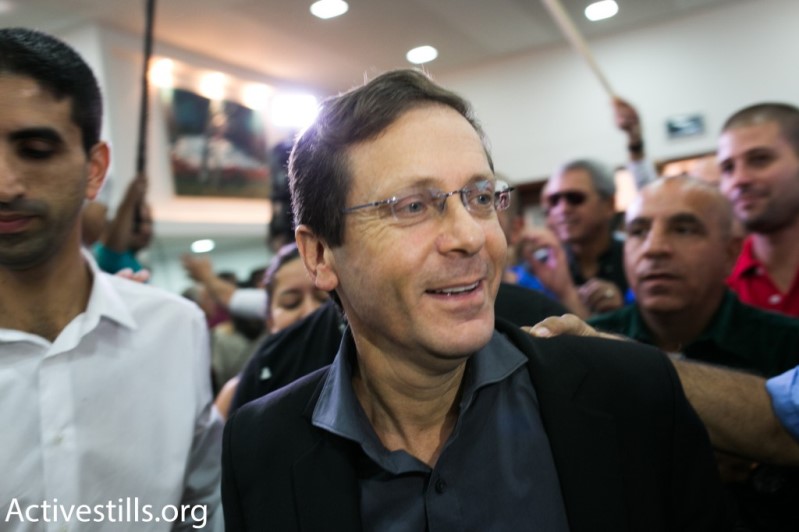 Labor leader Isaac Herzog at an election event. After three months of campaigning, his positions are still unclear (photo: activestills.org)

4. The Buzz: Election laws prevent the Israeli media from publishing polls in the final days of the campaigns, and there are all sorts of rumors flying around about “internal polling” done by the parties and the polling companies in those final moments.

Ten days ago Yair Lapid was rising, and some people predicted he will end up in the high teens – a remarkable achievement, given his poor performance as finance minister. Then it seemed that undecided voters were moving to Herzog, allowing Labor to open its current lead in the polls. This weekend, the wind blew in the favor of Kahlon, who was suddenly becoming the default candidate for voters who were disappointed with Bibi but didn’t want to go all the way and vote for Herzog (this led Netanyahu to publicly declare that Kahlon will be the next finance minister in his government). Over the past 24 hours it seems that Netanyahu has been getting some of his mojo back. After avoiding the media for years, the desperate prime minister gave interviews to just about every radio and TV station. He also made a rare public appearance at a right-wing rally in Tel Aviv‘s Rabin Square Sunday night. Likud voters are returning home, the rumors say.

5. The parties that won’t make it in. The Knesset threshold is the highest in Israel’s history, and three parties are on the verge of being left on the outside: Meretz, Liberman’s Israel Beiteinu and Eli Yishai’s Yahad. The former is from the Left, the last two are on the Right. Since votes for a party that didn’t make past the threshold are not counted, the elections could be decided by a party failing to make the 3.25 percent threshold, denying the entire bloc four precious seats.

6. Beyond the horse race. What does this election mean for the real existential issues, and most importantly, the occupation? A lot, and not much. I don’t think any Israeli leader – certainly not Herzog or Bibi – is about to end the occupation and allow the creation of an independent Palestinian state. I don’t think that any one of them can agree to the minimum that the most willing (or capitulating — depending on your perspective) Palestinian leadership can accept. The coalition that would support such moves simply doesn’t exist.

At the same time, if Herzog is elected I think we will see another push from the U.S. and Europe for an agreement. Yet at the same time, some of the pressure Israel has been facing will lift, as will the local incentive to end the status quo. Furthermore, Herzog never struck me as a man who would rise to the occasion, Abbas has a legitimacy crisis of his own, and other alternatives for ending the occupation simply don’t exist outside the realm of think-tanks, academic institutions and other such forums.

If Bibi is elected, on the other hand, the trends of the last few years will continue and even intensify: Israel will continue to settle the West Bank and East Jerusalem, but at the same time it might face growing pressure from the world. Netanyahu has no strategy for this challenge beyond maintaining the status quo, and nobody in Israel has any idea what to do should — or when — the PA ceases to function.

There is a fierce competition over power in the Israeli political system, but there is almost a consensus over issues — this is why you heard almost nothing about Gaza or the occupation during these elections. Almost all of the Jewish parties have some common denominator they can live with – the status quo, or some modified version of it. The various political parties differ from one another not so much in ideology (although sometimes they like to pretend they do) but in culture. They represent different groups, which are more and more alienated from one another. This has been the most tribal election campaign I remember – a product of the age of identity politics, the multi-cultural nature of Israeli society and the fragmented structure of our political system. There was a lot of nostalgia in the air during this campaign, especially within the center-left, but what you saw is the new face of Israeli politics. That is why making predictions is so difficult these days.