Maj. Gen. (ret.) Amos Yadlin of the centrist think tank is among the signatories of an ad praising the Jewish settlers who entered 25 apartments in the Palestinian neighborhood of Silwan last week. ‘By your act of settlement you make us all stand taller,’ the ad reads. Yadlin and Wiesel serve on the public council of Elad, the organization behind the settlement in Silwan. 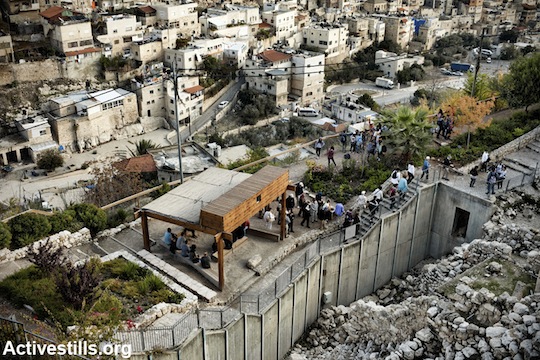 The City of David archaeological park, against the background of Silwan (photo: JC/Activestills.org)

One of the most dramatic settlement efforts in decades took place a couple of weeks ago, when 25 apartments in the Palestinian neighborhood Silwan, in East Jerusalem, were occupied by Jewish settlers. Silwan is the prize trophy for the settler movement, since it sits right on the edge of the Old City, inside the Holy Basin. The new Israeli push into the Palestinian part of the city was condemned by the international community and stood at the heart of the media coverage during Netanyahu’s visit to the U.S. The settlement effort, White House spokesman Josh Earnest said, was carried out “by individuals who are associated with an organization whose agenda, by definition, stokes tensions between Israelis and Palestinians.”

The settlement activities in Silwan are carried out by a non-governmental organization called Elad, which is said to have had good ties with the Prime Minister’s Office and the Jerusalem Municipality. The government appointed Elad to run City of David, the Jewish archaeological site in Silwan, and an attempt to give Elad rights near the Western Wall was recently struck down by the High Court.

Peace groups and investigative journalists have been warning for years about the role Elad plays in changing the demographic and political reality in East Jerusalem. (A comprehensive background document to the Israeli effort to take over Silwan can be found here.) Elad itself doesn’t have a web site, and the government has granted it a waiver from the requirement to disclose its considerable financial sources.

This morning, Elad’s public council ran an ad in Haaretz congratulating the settlers who entered the Palestinian neighborhood. The ad is signed by the chairman of the public council, Nobel Prize Laureat Elie Weisel. Weisel, a Holocaust survivor, is known for his support of Israel’s effort to settle Palestinian East Jerusalem. In the past, he has confronted the Obama administration for its criticism of government projects beyond the Green Line.

Other names include former Israeli Chief of Police, former head of the Prime Minister’s Office and that of the director of the Institute for National Security Studies, Maj. Gen. (ret.) Amos Yadlin.

Yadlin’s role with Elad is of special interest. The INSS presents itself as a security-oriented, realist think tank, so the fact that its head serves in the public council of a religious, ideologically-driven settler organization is particularly telling. Yadlin is also considered pretty close to the dovish Labor party, and he apparently mulled a run in the party’s primaries before the previous Knesset elections. (Rumors are that Yadlin is still considers entering politics with one of the centrist parties.)

The ad reads: “On the eve of Sukkot, we are happy to congratulate the dozens of Jewish families that are joining the Israeli settlement of Ir David [the settlers’ name for Silwan – N.S.]. We salute the Zionist work of those who take part in this mission. Strengthening Jewish presence in Jerusalem is the challenge for all of us, and by your act of settlement you make us all stand taller.” 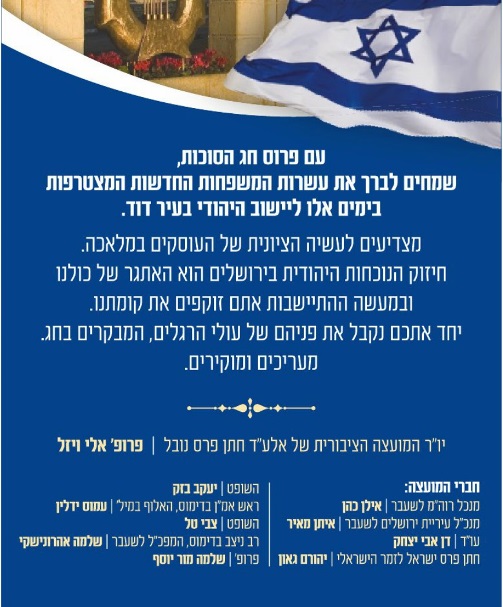 Last week, Haaretz revealed that Elad is looking to hire Israeli Jews to occupy the homes it purchased in Palestinian neighborhoods. The payment stands at 500 NIS (136 USD) per day. The job requirement: A licensed gun.

Related:
Settlers take over 7 E. Jerusalem homes in dead of night
In Silwan, the settlers are winning – big time
A couple of Netanyahu’s not-so-white lies to Americans