In testimony at his manslaughter trial for summarily executing a disarmed Palestinian attacker, Elor Azaria is openly describing the violence, de-humanization, hatred, and settler domination that defines the occupation. But make no mistake, he’s not breaking his silence. 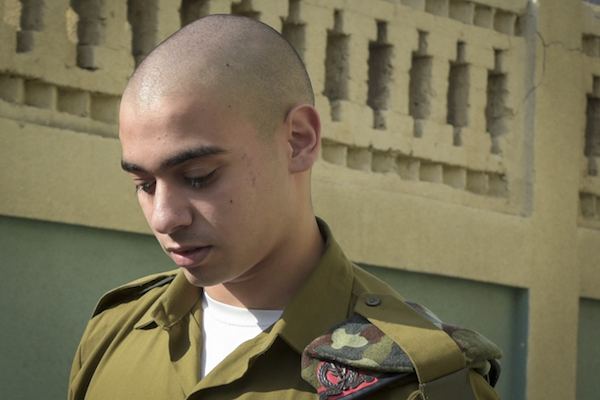 Elor Azaria enters the Jaffa military court where he is on trial for manslaughter for summarily executing a disarmed Palestinian attacker, July 24, 2016. (Flash90)

Nothing better symbolizes a loss of direction and of hope than focusing on trivial details, instead of on the larger picture. Elor Azaria, the Israeli soldier who summarily executed a disarmed Palestinian attacker in Hebron earlier this year, is the trivial detail. Because this is not about him — this is about the occupation.

Much can be said about Elor Azaria’s testimony during his ongoing military court trial for manslaughter. This testimony — the product of a legal defense strategy, not of a moral stance – coldly and clearly describes the reality and the devastation of the occupation, within which the Hebron shooting took place.

In his testimony, Azaria describes the violence, the de-humanization, the hatred, the intimidation, the domination, and the settler mastery which form the reality of the West Bank occupation. But despite the fact that through his testimony he has joined those who expose the truth about the occupation’s reality. Elor Azaria himself is not a silence breaker — far from it.

Yet Azaria has found himself in a Kafkaesque reality where the system he served, and within which he flourished and excelled, now points an accusing finger at him, and tries him in court, despite the fact that he acted according to the norms instilled in him. And now, in order to save himself, he is exposing that system’s hypocrisy, and while doing so, inadvertently exposing us, once more, to the things taking place in the occupied territories.

Azaria’s story begins with one ugly, vicious moment of the occupation, which happened to be caught on video. If this moment had not been filmed, it would most likely have been covered up. Just like another silent tree falling in the woods — another silent bullet fired, another death in the desolate streets of Hebron. Not a news story.

But a camera was on, and the world got to see, so the system was quick to respond with its usual, knee-jerk reaction: ‘It’s not us, it’s him. The guilt is with him. And him alone. It’s an aberrant incident. This is not normative behavior, in the world’s most moral military. We do not kill Palestinians for no good reason.’

But Azaria exposes, in his testimony, the untruthfulness in that Pavlovian reaction, and in his line of defense, he hits back. No, he accuses: ‘you are willful hypocrites, because this is far from an unusual occurrence. This is what we do there. This is how you have taught me to act. The violence, the light finger on the trigger, the disregard for human life, the use of force and the oppression – that is the policy, that is the worldview held by you and me, that is the reality being upheld over there in the West Bank. So if I am tried in court, you all are culpable.’

In this sense, Azaria joins those soldiers who have broken their silence. He places a mirror before us, the public, and lets us see our real face, the true face of the occupation. And in this respect he is correct: not only he should face trial, everyone should. We all should. All those who support the occupation, the hatred, the violence, the racism, and the settlements; not to mention all those who believe the occupation must be ended yet divert their gaze from the destruction it wreaks upon Israeli society.

Taking responsibility entails recognizing the immorality of an action, its corruption, and the destruction it brings upon us all. What we are seeing take place in Azaria’s trial is the exact opposite of that: this is the trial of a soldier who committed a crime, and of an entire system which has mobilized in order to brand him as “unrepresentative, a “rotten apple,” “insubordinate,” in order to wash itself of guilt. For his part, Azaria musters up the truth about reality in order to exonerate himself. But neither side takes responsibility — not partially, not at all.

Only when the blame games and the individual evasion is stopped will we be able to clearly see and recognize the joint responsibility. Only when we acknowledge the ugly, violent and cruel reality which we have created in the occupied territories, when we stop treating the symptoms and hiding behind “unrepresentative” incidents which just happened to be filmed at the right moment and from the right angle, only then will we be able to truly move toward changing the situation, and only then will we be able to see and comprehend that the occupation is not the problem of one individual, in this case Azaria – it is our collective problem. And the only solution is ending it.

If we fail to muster the courage needed to look reality directly in the eyes, this round will end exactly where it began. That execution in a Hebron street will be turned into nothing more than another “unrepresentative” incident, more bleach to whitewash the crimes of the occupation project. So long as we do not all take collective responsibility and break our silence, it is all of us who are standing trial. Because we all are guilty.

Yuli Novak is the executive director of Breaking the Silence.