It is also hard to see the Palestinian president agreeing to participate in negotiations headed by an American president who humiliated him so. 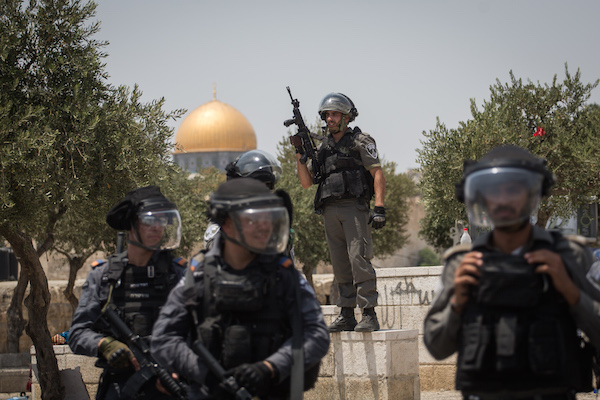 In the zero-sum game of Palestinian politics, every attack on Mahmoud Abbas and the Palestinian Authority is interpreted as aiding his ideological rivals in Hamas. Donald Trump’s recognition of Jerusalem as Israel’s capital and his announcement that the U.S. embassy will move from Tel Aviv to Jerusalem, along with other recent steps taken by the American government, thus weakened Mahmoud Abbas’s “diplomacy only” approach and increased the likelihood of a new outbreak of violence.

Trump’s speech did not come out of nowhere. Instead, it was the culmination of a longer process of an American erosion of the Palestinian Authority’s standing in the eyes of the Palestinian public. Last month, the U.S. State Department threatened to close the Palestinian Liberation Organization’s office in Washington in response to Mahmoud Abbas’s call for Israeli leaders to be put on trial in the Hague for their support of the settlement project. The State Department withdrew its threat to close the PLO office after a few days, but on the condition that the PLO office would limit its operation only to “activities related to achieving a complete and long-term peace between Israel and the Palestinians and Israel.”

Israel’s embassy in Washington, run by Ambassador Ron Dermer, has not faced any similar restrictions.

The American Congress is currently in the final stages of passing the Taylor Force Act, which will dramatically cut American financial support to the Palestinian Authority as long as the PA continues to pay salaries to Palestinians imprisoned in Israel for terrorist activity. The law, named after a young American former army officer who was stabbed and killed in Jaffa in March of 2016, passed with a large majority in the House of Representatives and is awaiting final approval by the Senate and the president. It is hard to criticize a law aimed at protecting the lives of Americans and Israelis; it is clear, however, that the unavoidable result of a sudden halt in funding to the families of thousands of prisoners would be widespread protests aimed at the Palestinian Authority.

The reconciliation talks between Hamas and the PA again raise the question for the Palestinians: what is the optimal strategy when facing Israel? The Palestinian street remembers that Hamas successfully brought home 1,027 prisoners — 280 of whom had been given life sentences — as part of the Gilad Schalit deal. Abbas, in contrast, managed to free only 78 longtime prisoners in the 2013-2014 Kerry-led peace talks, and was humiliated by Netanyahu’s cancellation of the fourth round of prisoner releases.

Despite the desperate situation in the Gaza Strip, the Palestinians still remember that it was Hamas and the other “resistance organizations” that successfully led one of the most hawkish prime ministers in Israel’s history to withdraw from the Gaza Strip, including removing Jewish settlements. It took the PLO more than 20 years to get Israel to partially withdraw from Palestinian cities in the West Bank. When it comes to the issues most important to the Palestinian public, the number of Abbas’s real achievements is zero.

While one might have expected Hamas to exploit Trump’s announcement to challenge the PLO and Abbas, the reconciliation efforts are, surprisingly, at their peak. Mousa Abu Marzouk, deputy chairman of Hamas’s political wing, tweeted that the best response to the American announcement was “to reconcile, to end the sanctions [enforced by the PLO] on Gaza, and to stop acquiescing to every American demand, particularly on the issue of prisoners and detainees.” In a televised speech, Ismail Haniyeh, the head of Hamas’s political wing, called on the leadership of the PA “to proceed with national bravery and declare its refusal to comply with the abusive conditions of the Oslo Accords.” Just minutes later, Haniyeh met in Gaza with prime minister of the Palestinian national unity government, Rami Hamdallah, and the PLO’s representative for the reconciliation talks, Azzam al-Ahmad.

It is hard to imagine that Trump’s symbolic recognition of Jerusalem as Israel’s capital will completely destroy the Palestinian camp that supports peace talks with Israel. However, it is also hard to see Mahmoud Abbas agreeing to participate in negotiations headed by an American president who humiliated him so, especially as the sword of the American embassy hangs over his head. Peace talks are moving from the refrigerator to the freezer until a change in power in the PA, in Israel, or in the United States. The question is what happens in the meantime.

Elhanan Miller is a research associate at the Forum for Regional Thinking, where this piece first appeared in Hebrew. Read it here.