The Israeli government has guaranteed the non-viability of a two-state solution and apartheid has already arrived. I will not sacrifice my children’s future for a hopeless struggle. 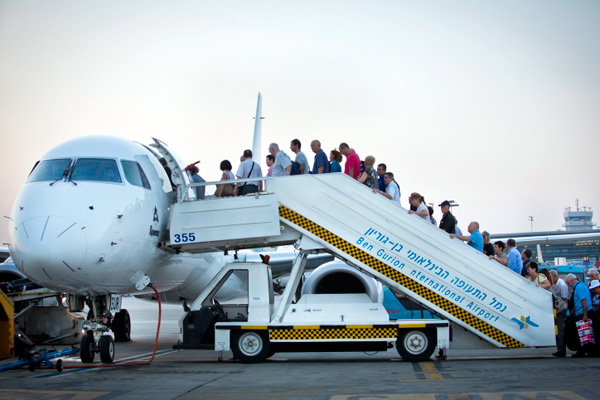 “Immigrating to Berlin was a choice to seek freedom from desperation.” Illustrative photo of Israelis boarding a plane departing Ben-Gurion Airport. (Moshe Shai/Flash90)

The immigration of young Israelis to Berlin is troubling “because it is precisely these young women and men who are needed in Israel,” explains veteran left-wing activist Uri Avnery in a recent Haaretz oped (Hebrew). “It is precisely those who are energetic, full of initiative and seekers of freedom, who are needed to save the state from the hands of Netanyahu and his associates.”

“The common excuse [for emigration] is despair,” Avnery asserts, going on to suggest that the collapse of Israeli democracy will be assured “if everyone who is able to resist this process gives up and moves to the coffee shops of Unter den Linden.” All of which leads Avnery to emphatically call on “the wonderful young people of Berlin” to return to Israel and “storm into politics, organize, change things, form new forces, [and] take control of the government.”

Contrary to the view that desperation is simply a byproduct or a secondary effect of “Ha’Matzav” (lit. “The Situation” – as Israelis colloquially construe the reality of occupation and conflict as a pre-given ‘state of things’), desperation is in fact a primary political tool: it is a palpable force in Israeli society that defines an essential aspect of the Israeli condition. If Ha’Matzav – that thing which binds us Israelis into a “we” – was taken from us, who and what would we be? Israeliness is defunct, bankrupt both ideologically and morally. What remains as a common ground is the state of emergency, the existential struggle, and the collective experience of being cornered. Collective desperation is thus essential for social cohesion, and in the end, Israelis need and even want “their” despair.

Is a belief in Israeli democracy the alternative to this? Should one believe, like Avnery, in a “future of two friendly states, which exist alongside each other in a shared homeland”? No. This is a false consciousness. The Israeli government ensured the non-viability of a diplomatic resolution, and the future entailed by these governmental actions — an apartheid state — has in fact already arrived. For the time being it (still) is a de facto rather than a de jure apartheid, but what of it? The entire Israeli system is founded upon “facts on the grounds,” creating a sharp divide between the way things are and the way things appear. Furthermore, although various institutional adornments signify Israel as a democracy, it is in fact a radical ethnocracy – being at its core a ‘blood-state’ in the völkisch sense. For what are Israeli Jews without the concept of Jewish blood? What is Israel without the separation and distinction between Jewish and Arab blood? Contemporary Israel is no longer capable of offering an answer other than blood and desperation.

Immigrating to Berlin was a choice to seek freedom from desperation. By leaving, I chose to stop wallowing in impossibility, to give my children the greatest gift I could – the liberty of self-determination, and to free myself from an existence defined by antagonism and constant struggle. Contrary to the manner in which the Israeli establishment construes emigration, when leaving Israel, one does not abandon Hebrew, forsake Israeli culture, shed one’s skin or shirk responsibility.

On the contrary: to leave is to take full responsibility of oneself. As such, emigration is also a political act. Certainly, it is a limited act, but it is still an act with both content and meaning, and, perhaps in the long-run and if enough people choose to emigrate, it will have some degree of influence. There is not much solace in this, but at least there is a bit of hope.

Na’aman Hirschfeld is a PhD candidate at Humboldt University of Berlin’s Institute of Cultural Studies. This text is based on a Hebrew op-ed that was published in Haaretz (July 31, 2016) with the title “Lo Toda, Ani Nish’ar Be’Berlin” (“No Thanks I’m Staying in Berlin”).