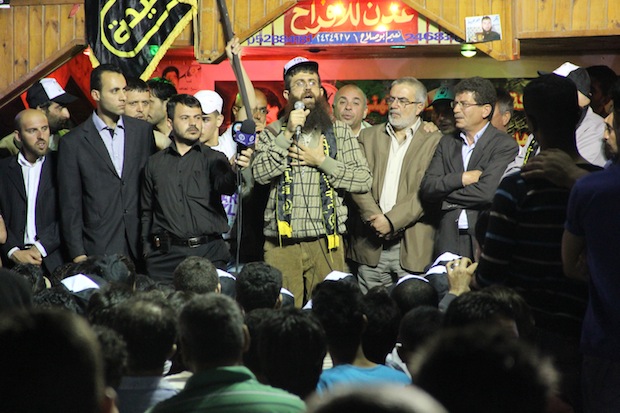 Khader Adnan speaks to his supporters on the night of his release from prison (photo: Omar Rahman)

A movement of Palestinian prisoners protesting their incarceration and treatment inside Israeli prisons is continuing to reach momentous proportions. Billed the “War of Empty Stomachs,” the number of prisoners on hunger strike is now in the thousands.

On April 17, the prisoner movement split into two when between 1,200 and 1,600 prisoners launched a coordinated, open-ended hunger strike against their treatment inside Israeli prisons, including the pervasive use of solitary confinement, denied family visits and right to education. Another 2,000 joined in a limited solidarity hunger strike.

The prisoners had joined a group of hunger strikes launched independently by prisoners protesting their administrative detention—a policy by which Israel incarcerates Palestinians for periods of up to six months without evidence or trial, which can be renewed by a military judge indefinitely.

Galvanized by the hunger strike of Khader Adnan, beginning on December 18 and carried on by Hana Shalabi in February, the hunger strike movement is continuing to grow rapidly. At least seven prisoners are reaching dire health conditions, including Bilal Diab and Thaer Halahleh, who are on the 61st day of their hunger strikes. Hasan Safadi is on his 56th day, and others, including Omar Abu Shalal and Jafar Izzedine, are quickly approaching these lengths of time.

Khader Adnan’s hunger strike—which lasted 66 days, the longest in the history of the Israeli-Palestinian conflict—opened the door for other prisoners after Israel decided to release him. He was joined near the end of his hunger strike by Hana Shalabi, whose hunger strike lasted 44 days before she was deported to Gaza in a release deal.

As more prisoners continue to approach the end of the road, Israel faces an increasingly difficult position. It can either follow suit with the two aforementioned hunger strikers and release more prisoners, or Israel can let them die in prison and potentially set off large-scale protests in the occupied territories. The latter choice also carries with it increased scrutiny on the practice of administrative detention, which is permitted under international law only in the most extreme cases. There are currently over 300 Palestinian prisoners held in administrative detention by Israel; the longest has been detained for over five years. At times, the number of prisoners has numbered in the thousands.

More prisoners have already declared they will begin open-ended hunger strikes this coming week, and demonstrations have begun to spread outside the occupied territories. One is scheduled for Thursday May 3 in front of the prison hospital in Ramle, Israel.

The latest hunger strikes have lacked the media coverage received by Khader Adnan and Hana Shalabi, both in the country and internationally. However this is likely to change in the coming days as several of them reach the end of the road and Israel is once again forced to choose which path it will take.

Click here to read more on the issue of Palestinian prisoners in an article I published in The National on Friday:

The centrality of the prisoner issue in Palestinian life has virtually no parallel anywhere else in the world. It is almost enough to note that the Palestinian Authority – the semiautonomous body that has governed the Palestinian territories since 1993 – has a ministry of prisoners’ affairs and that there are numerous social clubs, organisations and even a museum devoted to this cause.

For years, prisons have substituted as universities for large swathes of the population and provided a base for grassroots political organising. The country’s most popular political figure, Marwan Barghouti, is currently serving five life sentences but is still a likely contender for president. After close to 45 years of living under military occupation, where resistance is prized and collaboration with Israel is the ultimate crime, the stigma of prison has been transformed from a basis of disrepute into a badge of honour and, indeed, a source of pride.

Put simply, for Palestinians, the prisoner issue is only a microcosm of life under occupation, where many simply substitute a larger cell for a smaller one. Until they are all freed, there will likely be no dramatic changes inside the prison walls.