The Jerusalem apartment shared by Eritrean asylum seekers was set on fire late last night, Ynet reports. Four were taken to the hospital, where they were treated and released for burns and smoke inhalation. Graffiti outside of the apartment read, “Get out of the neighborhood.” 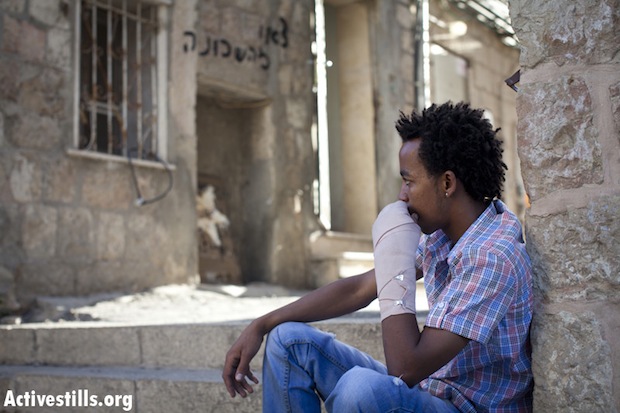 Alola Dabesai, an Eritrean refugee, outside his apartment that was torched Monday in Jerusalem. (photo: Oren Ziv/Activestills)

Authorities were alerted to the fire shortly after 3:00 AM. Firefighters rescued 10 Eritreans trapped inside; four were taken to Shaare Tzedek Hospital where they were treated for light injuries and released. According to Assaf Avras, the spokesman of Jerusalem Fire Services, whoever set fire to the apartment intended to kill those inside.

The fire comes less than two weeks after an anti-African protest in south Tel Aviv turned into race riots. Both refugees and the Hotline for Migrant Workers report that a number of asylum seekers have been attacked and threatened by Israelis since then.

In late April and early May, a number of Molotov cocktails were thrown at the apartments of Africans in south Tel Aviv.

Violence towards the African community began at least a year and a half ago. In January 2011, the Israel-born daughters of Nigerian migrants were jumped by a group of Jewish Israeli youth. The boys shouted racial slurs at the teenage girls. One of the attackers was armed with a knife and one of the girls needed medical treatment for her injuries.

That same night in 2011, a flaming tire was thrown into an Ashdod apartment shared by Sudanese refugees.

Knesset Members have attended anti-African protests in south Tel Aviv since they began in 2010.