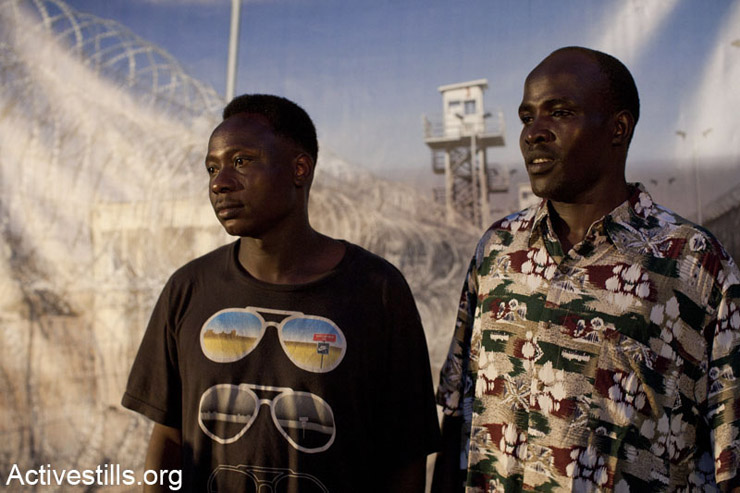 Refugees pose in front of a poster of Saharonim prison, during World Refugee Day in tel Aviv on June 20, 2013. (Keren Manor/Activestills.org)

Some 350 Eritrean asylum seekers are in the fifth day of a hunger strike protesting their administrative detention in an Israeli prison.

Asylum seekers in Block 3 of the Saharonim detention facility began a hunger strike on Saturday June 22, according to the Hotline for Migrant Workers and Physicians for Human Rights. A day later, detainees in Block 4 began returning their meals as well.

Nearly 2,000 African asylum seekers are being held in Israeli prison facilities under the Anti-Infiltration Law, passed last year, which allows the indefinite (three years at a time) administrative detention of asylum seekers without trial.

The protest is quite extraordinary, explained Hotline for Migrant Workers activist Elizabeth Tsurkov, “considering that the hunger strikers, Eritreans, come from an undemocratic country where no protest is tolerated.”

“This type of resistance is not something they learned at home,” she added.

A statement by Physicians for Human Rights Israel and the Hotline for Migrant workers said that the NGO has been unable to speak with the hunger-striking prisoners since Sunday. Detainees have been barred from using telephones in the prison blocks since Sunday, the statement added, and called on the Israel Prison Service to allow NGOs to meet with hunger striking detainees.