A group of some 20 Eritreans has been trapped for seven days between the Israeli and Egyptian fences in Sinai. Until Wednesday, soldiers were ordered to give them some water but no food. Activists who went there over the last several days were prevented from reaching the asylum seekers by soldiers. 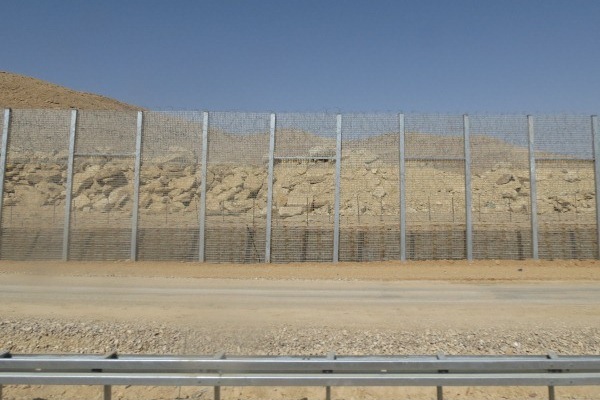 UPDATE: A delegation from Physicians for Human Rights traveled to the border today [Thursday], and reported the following (translated by Sol Salbe): A battalion commander named Dolev has come to meet the PHR delegation. He only agreed to speak with two doctors – Dr Kobi Arad and Prof Mick Elkan. He told them that the army not willing to allow the delegation to enter. He himself was going to travel to the actual border (400 metres from the delegation) to see for himself the state of refugees.

He said that the army itself and soldiers have not taken the food, and that the food brought earlier by activists has remained at the military/police checkpoint. He said the army gave the refugees water, and that a medic has given them an infusion through the fence. But communications with them was problematic.

PHR doctors demanded to be allowed to reach refugees – the PHR delegation included a Tigrinya-speaking nurse – but if that could not be achieved that at least a qualified physician rather than a medic be allowed to examine the refugees so we know what their medical condition is. The commander could not explain why the army has not delivered food. He contended that the medical delegation has been stopped for “security” reasons.

The PHR’s delegation at the police checkpoint is being held up by three military jeeps, two police cars and a military police vehicle.

The group fled from Egypt to Israel, crossed the Egyptian fence into Israeli territory, and was then stopped by the fence Israel has been erecting precisely in order to stop asylum seekers such as these (in addition to the illegal smuggling of arms and drugs) from entering Israel. As Haaretz reports, soldiers have been ordered to prevent the group from crossing the new fence, and for six days now have only given the asylum seekers little water and fabrics for protection from the sun – but no food. Two of the women who reached the fence were pregnant, and one of them has reportedly already suffered a miscarriage during the long stay in the sun.

According to Haaretz, Interior Minister Eli Yishai said Wednesday that “every day there are people stuck there. If there were no fence, and if we weren’t steadfast, there would be a million people here. Don’t ask what we would do with a million refugees here – excuse me, migrant workers.”

A small group of Israeli activists took a car from Tel Aviv to the border Tuesday night, carrying substantial amounts of food for the asylum seekers. Upon arrival the activists were able to contact some Egyptian soldiers on the other side, who confirmed the asylum seekers’ presence in the area. Egyptian soldiers have been known in the past to shoot at asylum seekers near the border, and Egypt is notorious for having returned refugees, including from Eritrea, to their countries of origin.

The activists moved on, only to run into an IDF patrol. Soldiers confirmed the earlier reports that they were only allowed to give the people behind the fence water, not food. None reported disobeying the order. The commander of the force showed the activists a closed military zone order, and sent them away after taking the food they brought and promising to check with his superiors if he is allowed to bring the food to the starving people. A second group of activists went to the border this morning and was also turned away. (See UDPATE below)

Meanwhile the International Committee of the Red Cross is starting to get involved, and Israeli experts on international law warn that stopping asylum seekers from entering the country and making their claim for asylum is a breach of binding treaties to which Israel is a signatory. Israeli NGOs are now preparing to file an urgent petition to the High Court demanding the asylum seekers be allowed into the country.

My own estimation is that Israel will not let the asylum seekers die in the absurd prison in which they are caught. Eventually they will be let in. The cynical point of this extremely cruel behavior echoes what Interior Minister Eli Yishai continues to emphasize: that the aim of Israeli policy is to make life unbearable for the asylum seekers, who cannot be deported due to a severe risk to their lives in their countries of origin – mainly Sudan and Eritrea – and therefore should be dissuaded from attempting to enter Israel in the first place.

As the majority of asylum seekers in Israel come from Eritrea, and as the state offers them collective protection from deportation without checking their individual refugee claims while at the same time forbidding them from working, it is worth mentioning that the global recognition rate for Eritreans as refugees stands at 93 percent. Those making the journey from Egypt to Israel are at serious risk of being kidnapped by a sophisticated smuggling network for ransom, torture, rape, organ harvesting and death. Just today, Human Rights Watch published a detailed account of the atrocities committed by the smugglers, and called on Egypt to crack down on the networks.

As Eritrean activist and asylum seeker Isayas Teklebrhan recently said in a demonstration outside the newly built desert jail for asylum seekers: “We did not go through all this to find a job in Tel Aviv. We took on all this suffering and anxiety to find dignity and life. To find hope. Because once hope is dead you die with it as a human being… We plea for your mercy, we plea for your protection, we ask you as humans to humans – for dignity.”

Following the directives of the political branch and the the decisions of the Israeli government IDF forces are working to prevent illegal entry into the Israeli territory on the Western border. Construction of a fence along the border is in these days being completed. On the Western side of the fence, facingEgypt, stays in recent days a group of foreigners whose entry intoIsraelis prevented thanks to this fence. For humanitarian reasons IDF forces are offering the foreigners water through the fence.

An IDF source also added that as of today asylum seekers will also be offered food.]

Here is a a video report from the border by Lia Taranchansky for The Real News.

Read our special coverage on Seeking Asylum in Israel