Had the Israeli media paid attention to a protest by Eritrean refugees outside their embassy last week, the public would have learned something valuable about the Eritrean community in Israel: they desperately want a better future for their country so that one day soon, they can go home. 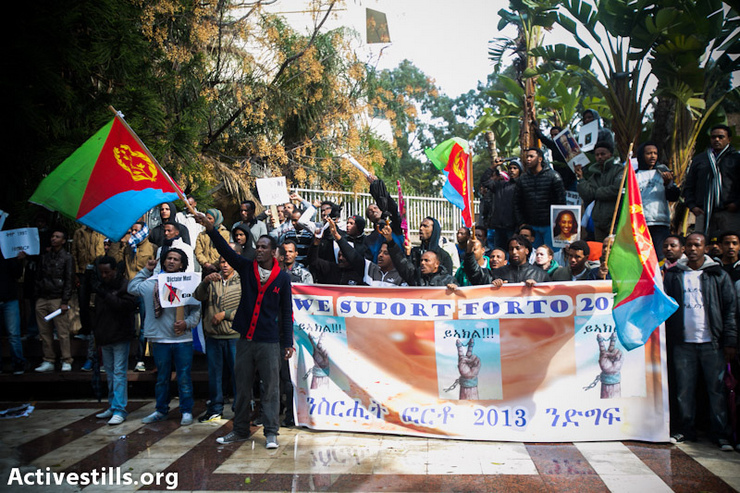 Eritrean refugees living in Israel take part in a protest outside the Eritrean embassy in the city of Ramat Gan, near Tel Aviv, February 1. 2013. The protesters were calling for the ousting of the dictatorship regime in Eritrea, and the release of all political prisoners. (Photo by: Yotam Ronen/Activestills.org)

Over 200 Eritrean refugees gathered last Friday, despite the rain and a storm, in front of the Eritrean embassy in Ramat Gan to express their support for Eritrean soldiers who rebelled last week and took over the Eritrean Ministry of Information’s building in the capital Asmara. For a moment, it seemed that the 22 years of brutal dictatorship headed by Isaias Afewerki were about to come to an end. Had Israelis paid attention to the protest, they would have learned something valuable about the Eritrean community in Israel: they desperately want a better future for their country so that one day soon, they can go home.

In the past week, throngs of exiled Eritrean refugees gathered in capitals around the world to express their support for the brave soldiers who dared to challenge the regime. Eritrean protesters stormed the embassies in Rome and London, the embassies whose representatives terrorized the Eritreans in those countries of asylum in an effort to extort from them a 2 percent “exile tax.”

The Eritrean refugees in Israel also held a protest in solidarity with the soldiers who rebelled, made speeches and repeated the demands made by the soldiers:

Videos from protests of Eritrean refugees around the world and in Israel present Eritrean communities that are highly politically aware, united, coordinated, and filled with the desire to return to their beloved homeland Eritrea and establish a democracy there, similar to the kind they were exposed to in their countries of asylum, which granted them refugee status and usually also citizenship.

But there is a great difference between the communities of Eritrean refugees around the world and the community in Israel.

Eritrean communities live and flourish throughout the Western world. In Israel, the community barely survives. While the vast majority of Eritreans in Western countries have been granted citizenship in their country of asylum, the asylum requests of Eritreans in Israel are not even examined. Eritrean refugees are detained without trial, and those who are not incarcerated are forced to subsist without a work visa, support from the state or social services. They are labeled by decision-makers and the Israeli media as “work infiltrators” to ensure public animosity toward them and decision makers from time to time make announcements about their impending deportation to Eritrea or some other African country to guarantee the Eritrean community in Israel lives in constant fear.

The Eritrean refugees in Italy and the U.K. were unwelcome guests in the embassies of the dictatorship that forced them into exile, but as they did not harm the embassy or its staff, all they had to deal with were the hostile stares of the pro-regime embassy staff. On the other hand, any attempt by the Eritrean refugees to breach the embassy in Israel could have resulted in their arrest and incarceration without trial for a period of three years under the Anti-Infiltration Law.

Despite the daily hardship, hundreds of Eritreans chose to forgo a day’s pay to stand outside the Eritrean embassy in the pouring rain and demand what all citizens of democratic countries take for granted: “a country where every Eritrean is respected regardless of their personal background, their religion, political affiliation, ethnicity or personal views … a country where people can live without fear or spies, prisons, slavery and poverty”.

Foreign media arrived to cover the protest, but the Israeli media was absent. This is unfortunate because Israeli citizens and decision-makers should be made aware of the how much the Eritrean refugees in Israel wish to return to their homeland. If Israel stopped its support of the brutal rule of Afewerki, they would further, even a little, the laudable goal of the brave Eritrean refugees: “justice for all Eritreans.”

Sigal Rozen was among the founders of the NGO “Hotline for Migrant Workers” (HMW) in 1998. Sigal is the Public Policy and Foreign Media Coordinator at the HMW, established to defend the rights of migrant workers and refugees in Israel, and to combat human trafficking.