Eight Ethiopian demonstrators arrested at Jerusalem protest against police brutality. Activists: The law does not protect us, we must stop enlisting in the army. 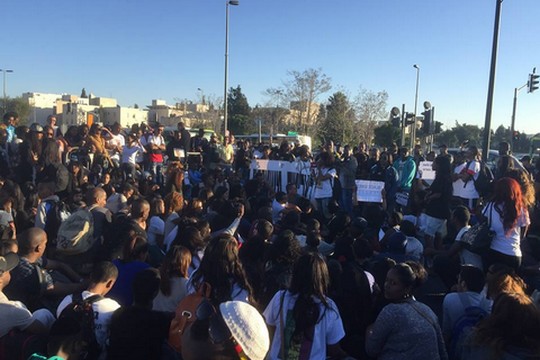 Hundreds of Ethiopian-Israeli activists demonstrated against police violence in front of the Israeli police Jerusalem headquarters on Tuesday.

The protest came as a response to the police’s recent decision to close a criminal investigation against two policemen who tasered Yosef Salamsa, a 22-year-old Israeli-Ethiopian, in 2014, leaving him outside a police station in the northern town of Zichron Yaakov. No evidence was found of criminal conduct by police officers, although investigators recommended disciplinary action against the two for lying about warning Salamsa before using a taser against him and leaving him outside the police station for 35 minutes.

Three months after the incident, Salamsa was found at the foot of a cliff in northern Israel, having apparently taken his own life.

Activists gave speeches in which they expressed being fed up with the political establishment, calling on Ethiopians to begin a militant civil struggle that includes protecting themselves against the police, refusing to enlist in the army, and to stop respecting the law that does not protect them. They also read out the names of Ethiopian Israelis who have been murdered by police.

The police arrested eight protesters who were marked as organizers. At least one demonstrator was wounded and taken to a hospital.

Throughout the demonstration, members of the Salamsa family called on protesters not to respond to police provocation or give the demonstrators the satisfaction of beating another Ethiopian. “They are full of blood,” called out Salamsa’s sister to the police, “we don’t want another victim of their violence today.”

The issue of policy brutality against the Ethiopian-Israeli community arose in mid-2015 when thousands of members of the community held a vigil following the release of a video showing policeman brutally beating an Israeli soldier of Ethiopian origin. The vigil spiraled into clashes with police, wounding 15 demonstrators.

Where is the Left? 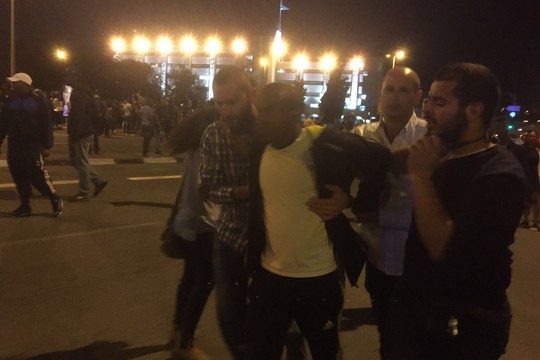 The decision to close the case is seen as a rubber stamp for future violence against the Ethiopian community. It is yet another expression of a racist ideology that views Ethiopians as people who can be abused and tortured, while normalizing police violence. We must remember this decision every time a police representative or member of the media dares to spout cliches about the violence of Ethiopian protesters.

Sadly, however, very few non-Ethiopians came to support the demonstrators. The brutality of the police hurts all of us, and there is a need for people to document or try and stop this brutality (and at the very least to provide first aid to those on the front lines).

If you identify as a radical leftist and all you care about is Palestinian rights, then you are not part of the Left. We must take advantage of this historical moment and broaden the spectrum in order to support the Ethiopian community’s struggle against police brutally and for equal rights.

When the next wave of protests in Israel breaks out, it will be led by activists from the Ethiopian community. They come from the ghettos and the immigration absorption centers, they are part and parcel of their community, they are carrying out their struggle on a daily basis, and they are sick of a racist, oppressive establishment.