Fifty MEPs send an open letter to their Israeli counterparts urging them to abandon legislation that singles out European-funded human rights and peace NGOs while not touching right-wing organizations. 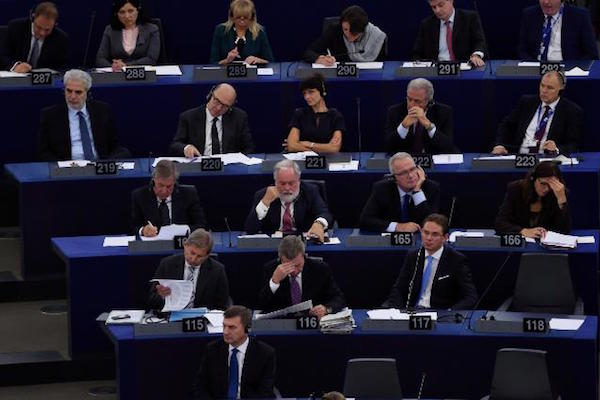 Dozens of members of the European Parliament published a harshly worded open letter to all members of the Israeli Knesset on Tuesday regarding the controversial “NGO law,” a new bill that selectively imposes transparency requirements on those largely left-wing associations receiving more than half of their funding from abroad. The bill passed the first of three readings in the Knesset late Monday night.

The letter, promoted by UK Labour MEP Julie Ward, calls on the Israeli Knesset to reject the legislation. “We strongly urge you to be brave and strong in upholding Israel’s pluralist democratic values,” a passage of the letter says. “Human rights and peace-building NGOs serve as watchdogs for democracy, not enemies of the state.”

Asserting that the occupation is not an internal Israeli matter, the letter notes that the EU “funds the Palestinian Authority, without which [Israel’s] administration of the Palestinian Territories would not be viable.”

The document has been signed by 50 MEPs, but Julie Ward’s assistants claim many more asked to support it after the deadline had passed. The majority comes from leftist groups like the Greens and the Gue/Ngl, which includes parties like Syriza (Greece), Podemos (Spain) and Sinn Féin (Ireland). Also the center-left Socialist and Democrats group, the second biggest in the Parliament after the center-right European People’s Party, expressed its support with 11 signatures. No MEPs from mainstream right-wing groups, let alone Nigel Farage’s “Europe of Freedom and Direct Democracy,” have agreed to co-sign the letter.

The document comes amid a period of great tensions between Israel and the EU, peaking with the European Commission’s interpretative notice on labelling last November. The decision to label Israeli settlements products enraged the government of Benjamin Netanyahu, whose diplomatic efforts to block the move were however fruitless. In a letter to European Parliament President Martin Schulz at the time Netanyahu complained of an anti-Israeli “double-standard,” quoting “nearly 200 territorial disputes worldwide” which have not been subject to trade limitations of sorts. Specifically, he insisted on the case of Northern Cyprus which came under Turkish control in 1974.

Underlying the periodic standoffs between EU officials and members of the Israeli government is Israel’s shift to an unprecedented cultural hegemony of the right. As Noam Sheizaf wrote late last year, the right has become the “zeitgeist” of Israeli democracy. Illiberal moves like the NGO bill have suddenly become permissible as representative of “the will of the people,” Sheizaf wrote. A creeping tyranny of the majority seems to be breeding in the Holy Land.

As progressive views of the conflict are crushed or altogether banned, EU institutions grow weary of repeating the two states mantra while Israel turns it into an actual pipe dream on the ground. Likewise, Israeli policy-makers grow weary of seeing the Green Line quoted in EU legislative documents as they try to erase it by presenting the occupation as a “fait accompli,” a non-negotiable “fact on the ground.” For this very reason the directive on labelling was perceived as a huge blow, although inconsequential in terms of Israeli exports to the EU. While still reluctant to scale-up its use of market power to pressure Israel, the EU was enshrining opposition to the occupation into documents of near-law.

The latest letter from the European Parliament, which specifically addresses the “Transparency Bill,” warns that “all the European funds and benefits that Israel enjoys is based on Israel’s commitment to human rights, democracy, end of occupation, and the peace process, leading to a viable and just two-state solution.” Diplomatic warnings are increasingly pointing in the direction of market measures, while Israel pivots ever further to the right.

Davide Lerner is an Italian journalist who has written about the Israeli-Palestinian conflict on publications like “l’Espresso”, Italy’s first weekly, and TPI, a fast-growing international politics online magazine. He currently lives in Brussels.