The EU’s new settlement guidelines, which were published last summer, put limits on loans to Israeli businesses operating beyond the Green Line and forbid EU financing of projects in settlements. Right-wing ministers are demanding that Israel reject the new terms, while centrists would like to avoid international isolation. 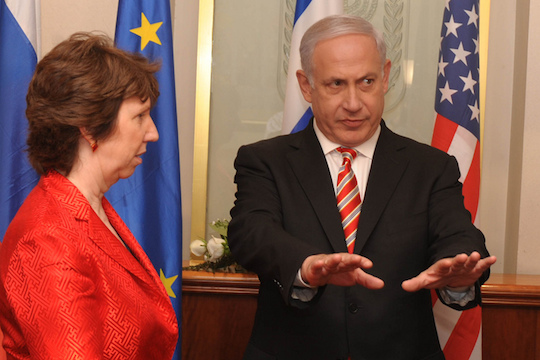 File photo of EU foreign policy chief Catherine Ashton with Benjamin Netanyahu. The Israeli prime minister is looking for a solution which will allow his government to continue cooperation with the EU while maintaining its freedom to settle the West Bank. (Photo: Moshe Milner/GPO)
Israeli Prime Minister Benjamin Netanyahu held two long cabinet meetings with senior ministers on Sunday regarding the difficulty in reaching an agreement with the EU over its new ‘settlement guidelines’ for joint projects with Israel, Israeli media reported. Netanyahu instructed Justice Minister Tzipi Livni to try and reach a deal that would end the impasse within the next couple of weeks – the deadline for entering the prestigious Horizon 2020 program, which could bring NIS 1.5 billion ($400 million) to Israel in the form of research and developments grants.

Israel rejected the guidelines, demanding that it receive the grants and loans on its own terms. Israeli ministers fear that the guidelines will serve as a precedent that would limit not only the government but also the private sector’s ability to conduct its business in the Occupied Palestinian Territories (OPT) and in the Golan Hights. Officials have expressed fear that banks that provide settlers with subsidized mortgages or franchises that open branches in the settlements will suffer in the future. However, with the much-desired Horizon 2020 program coming up, Israel asked the EU to negotiate a “softer” version of the guidelines, one which would, in the words of an Israeli official, allow the government “to march with [the guidelines] but not feel them.”

Israel agreed not to use European money beyond the Green Line but asked that the provision regarding activities in the Occupied Territories not be included in agreements Israeli institutions are asked to sign, Haaretz reported. Israel also asked to introduce a new mechanism which will deal with loan requests, rather than an across-the-board commitment that prevents recipient organizations from operating in the OPT.

Israeli is also demanding that the EU state the guidelines will not prejudice or be binding in future Israeli-Palestinian negotiations. According to the reports, the EU agreed to the last term, but rejected the others.

In the urgent meetings Prime Minister Netanyahu called yesterday conflicts arose between right-wing politicians like Foreign Minister Avigdor Lieberman and his deputy, Ze’ev Elkin, who demanded to reject the guidelines, and Yesh Atid’s ministers Ya’akov Peri and education minister Shai Piron, who want to join the EU programs at any cost. Netanyahu, it seems, would like to have Israel join the Horizon 2020 program but also do as much as he can to maintain the government’s freedom to settle the West Bank and East Jerusalem.

A final note: When the guidelines were published by Barak Ravid on Haaretz, I wrote that after years of condemnations for Israel’s settlement activities, this was the day Europe finally got Israel’s attention. Ravid himself once told me that in terms of political and diplomatic effect, this might have been his most important exposé ever.

Despite the very modest effect the guidelines could actually have on the ground – one might say that all they are meant to do is allow the EU to continue its support for Israel while distancing itself from the settlements – the commission notice sent shockwaves through the political system. Only a couple of weeks before they were published, Economy Minister Naftali Bennett boasted that “the world doesn’t care” about the settlements. Now, for the first time in decades, a serious debate has started among local elites about what isolation the occupation could cause Israel. The centrist Yesh Atid party was forced to examine the implications of its own political pact with the settlers, and the heads of the universities will now think twice before extending their work beyond the Green Line.

This national conversation – long overdue – is more important than anything in the guidelines themselves.

Related:
Why the EU shouldn’t amend its new settlement guidelines
What’s in the new EU guidelines regarding activities beyond the Green Line?
The day Europe got Israel’s attention