Where are Jewish Israelis when Palestinians find themselves under attack? When entire villages are demolished? When health care is conditioned on providing intelligence? When people are imprisoned without even the courtesy of a conviction? 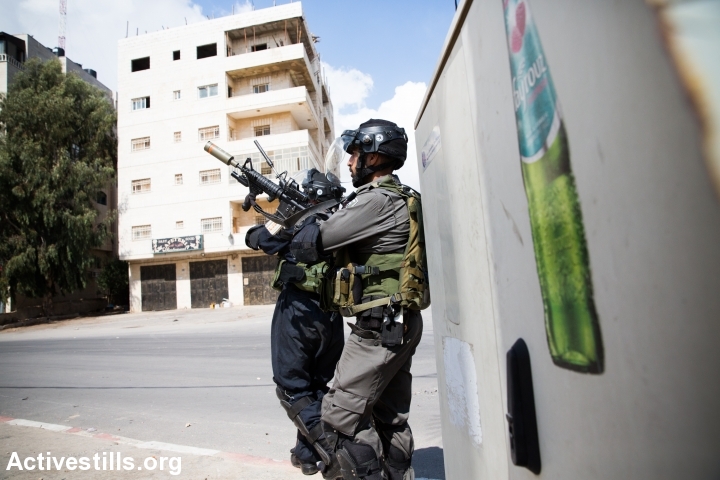 Israeli border policeman shoots in the air during clashes with Israeli forces near the illegal settlement of Beit-El, West-Bank, on October 8, 2015. Tension rises in the past weeks in the region with reciprocal violent attacks of both Israelis and Palestinians and clashes around the West Bank, Jerusalem and Palestinian towns in Israel. (photo: Yotam Ronen/Activestills.org)

For Palestinians, every day is a wave of terror. And every day Jews stand idly by. It’s just that the majority of Jews view it as completely normal and logical that the state acts the way it does, or they prefer to bury their heads in the sand. I can think of three fundamental, day-to-day examples that I know firsthand and can happen at any time.

Israel’s Erez Crossing to Gaza. A Palestinian who wants to leave Gaza for medical treatment in the West Bank, Israel or Jordan must pass through Erez. If he or she even receives a permit at all, a Shin Bet agent at Erez will often “propose” that the Palestinian become a collaborator. In exchange, they get permission to leave the Strip for medical treatment. I personally know of a case in which a girl with cancer arrived at Erez, where the Shin Bet stipulated that her family would have to become informants in order to leave. I learned of dozens of such cases while working for Physicians for Human Rights-Israel. The Israeli media doesn’t care. The life of ill Gazans is a non-story. That is, unless they stab or launch missiles at Jews, that’s when we talk about a “wave of violence.”

Administrative detention. Thousands of Palestinians have been imprisoned without charge or trial for long periods of times. Recently, administrative detainee Muhammad Allan came close to dying during a hunger strike against his administrative detention. A few weeks later, Allan was detained was once again after being released from the hospital. How many Jews came out to protest against this crime? How many on Facebook shared his remarks or those of his attorneys? A tiny minority. 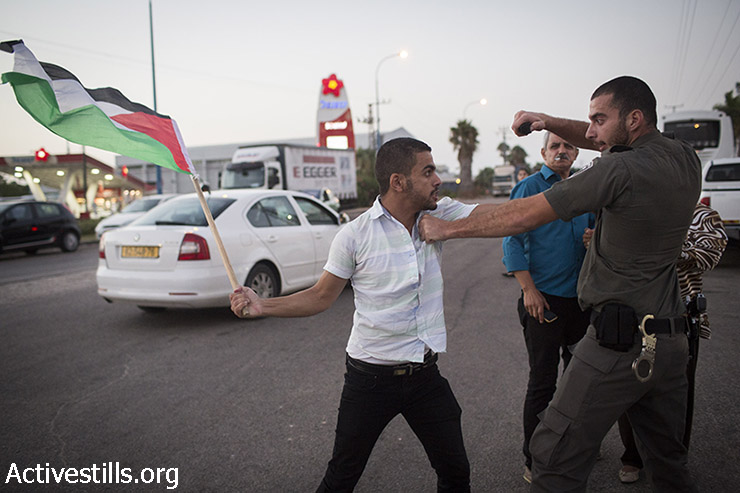 Israeli border policeman points pepper spray towards a Palestinian activist, during a protest for the release of Palestinian Mohammed Allan, who is held by Israel without trial and who has slipped into a coma after a nearly two-month hunger strike, in the city of Ashkelon, August 16, 2015. Police prevented from Palestinian and Israel activists to arrive to the hospital in which Allan is held, arresting eight activists, using pepper spray and skunk water canon. (photo: Oren Ziv / Activestills.org)

Umm al-Hiran. Israel is planning on destroying an entire village comprised of more than 1,000 residents and establishing a Jewish-only town on its ruins, complete with an “acceptance committee.” Contrary to what the state claims, the residents of Umm al-Hiran are not invaders. They were sent there by the Israeli army, which governed most of Israel’s Arab citizens for the first two decades of Israel’s existence. Now the state wants to uproot them again. Just like a Palestinian can come to the rescue of Jews who are under attack (which has happened more than once), Jews are more than welcome to come to Umm al-Hiran and hear the history of the place for themselves.

I do not think we need a “joint struggle,” nor do I believe that everyone needs to be involved in every struggle. But we must live up to our own principles: those who expect Palestinians to be “humane” and “merciful” must ask themselves how merciful they are on days when everything seems normal, when the atrocities taking place under our noses are our responsibility.

Tom Mehager is a political activist. This article was first published in Hebrew on Haokets.