Three Palestinian teens speak about the abuse they say they endured in Israeli military custody after being arrested during a demonstration along the Gaza border. 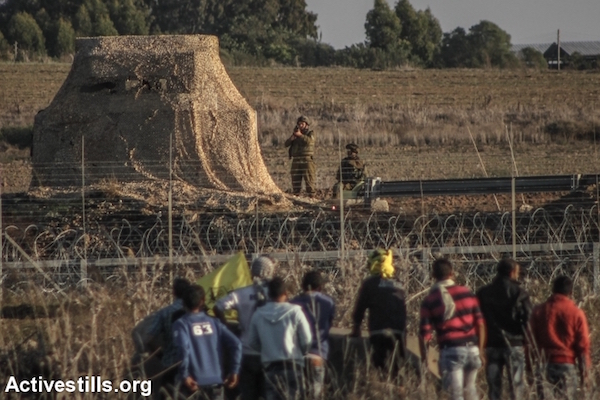 Israeli military police are investigating the suspicion that over the course of three days, IDF soldiers abused three Palestinian teenagers who illegally crossed into Israel from the Gaza Strip during a protest late last year, according to a Haaretz report earlier this month.

On October 10, 2015, the three Gazan teenagers were participating in a protest along the border, during which protesters attempted to damage the fence, and threw stones toward soldiers positioned on the other side. The soldiers responded with gunfire, tear gas grenades and rubber-coated steel bullets.

At some point a number of protesters pulled up part of a gate in the fence. Military forces gave pursuit with the use of flares and K9 units. Six of the protesters, those who fled into Israeli territory, were arrested.

Several months after their release, three of the arrestees, minors aged 15, 16, and 17, told a researcher working for Israeli human rights organization B’Tselem what happened during the 72 hours following their arrest.

For three days, the teenagers say, soldiers kept them tied up in the open, repeatedly beat them, denied them food and drink, subjected them to various degradations, and kept them awake. One of the teens says that soldier extinguished cigarettes on his arms and legs. 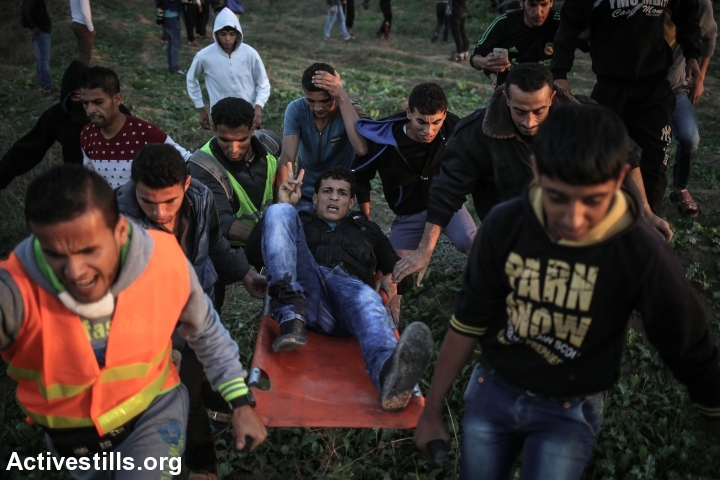 Palestinians carry a protester who was shot during clashes with Israeli forces near the Israel-Gaza border, near Nahal Oz crossing, Nobember 20, 2015. (Ezz Zanoun/Activestills.org)

The following are three testimonies collected from the three teenagers, as provided by B’Tselem:

A few minutes after I joined the demonstration, I went ahead with some other guys and we tore out the iron gate that’s part of the border fence. I entered Israeli territory and Israeli military jeeps started pursuing us, about five jeeps. The soldiers fired all around us. We kept running east into Israeli territory, into the vegetation. We ran a long way and couldn’t see the border any more. It was already evening and he sun had gone down. By nightfall, I realized we were in trouble and got scared. I couldn’t go back towards the border because the demonstration was over and the soldiers were occupied only with looking for us. I didn’t mean to go any further into Israel. I just wanted to get away from the soldiers and the gunfire. We kept running until 9:30 at night. The soldiers sent up flares and released dogs to pursue us.

Two dogs caught up with me. One got me by the left leg and other stood on my chest. The same thing happened to ‘Abd a-Rahman ‘Aydi, who was with me. Two other dogs attacked him. I started screaming because I was afraid of the dogs. A couple of minutes later, some soldiers came and pulled the dogs off us. Then they ordered us to undress completely and we stayed like that, naked, for a few minutes. Then we put our clothes on and the soldiers ordered us to sit on the ground.

A soldier tied my hands behind my back and blindfolded me. The same thing happened with ‘Abd a-Rahman. We were taken in one of the military jeeps to some military base about ten minutes’ drive away. There they took us out of the jeep, freed our hands and untied our blindfolds. One of the soldiers took me into a room with a desk and a computer. Two people in civilian clothes were sitting there. They didn’t introduce themselves. One asked for my name, which organization I belong to, and where I live. After I answered his questions, another soldier took me and sat me down on the ground in the yard of the base. He tied my hands again with plastic cable ties and blindfolded me again. They took ‘Abd a-Rahman into the room, too, and then sat him down in the yard not far from me. I could just see him from under the blindfold.

Then the soldiers put on music. There were a lot of men and women soldiers there and they started dancing. Every few minutes, one of them hit us with a rifle butt or slapped or kicked us. We stayed like that for three days, out in the yard of the base. They gave us only a bit of bread and some water and beat us every once in a while. The soldiers played soccer while we were in the yard and kicked the ball at us. We were so battered that our entire bodies ached. At night, when they knew we’d fallen asleep from exhaustion, they came over with a bucket of water and poured it on us. It was very cold, especially at night, and they constantly kept us from sleeping.

Once, when I was in a lot of pain during the night, a soldier came and took off my blindfold. He ordered me to drink a yellow liquid from a cup he was holding. I asked him what it was and he said it was medicine. It tasted bitter. My throat burned and I drank the entire contents of the cup. Then I no longer knew what was happening, I slept for several hours. When I woke up, I felt dizzy. 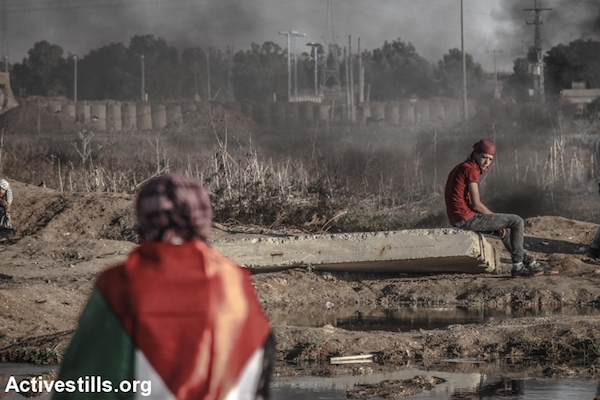 After I was arrested, they took me to a military base. The soldiers put me on the phone with someone. He asked my name and why I’d come to the border. Then they took me into the yard and I stayed there with the others for three days. They left us out there even though it was very cold. During those three days, the soldiers tortured us. Sometimes, while we slept, they poured cold water on us to keep us from sleeping. They wouldn’t give us any food or drink and wouldn’t let us go to the toilet. Every now and then, a soldier came and tightened the handcuffs, making it really hurt. At other times, soldiers came and beat us all over our bodies with the butts of their rifles. Sometimes, soldiers played soccer and kicked the ball at us; at other times, they put on music and kicked us in the face and all over our bodies.

One of the military jeeps caught me as I was trying to get back into Gaza. About seven soldiers got out of the jeep. Then another jeep drove up and several soldiers got out. They pointed their guns at me. They ordered me to stop and raise my hands. One of them told me to take my pants off. I refused, because he was trying to humiliate me. The soldiers came towards me and one hit me in the back with a rifle butt. He pulled my pants down and the boxer shorts I was wearing. Then he put my shorts back on and tied my hands behind my back with plastic handcuffs. They threw me face down on the ground, and then three soldiers turned me so I was lying on my right side and started kicking me with their boots and hitting me all over my body with their rifles. One blow hit me in the teeth and I broke a front tooth. I felt myself swallow it. They especially focused on hitting my stomach and I started vomiting blood.

After a while, they left me just lying there. Then another jeep drove up and stopped right beside me. The driver got out and started beating me. Then they put me in the jeep and continued beating me until we got to a military base. There they took me out of the jeep and sat me down on the ground outside. After about an hour, they took me to an intelligence officer in civilian clothes who started interrogating me. He asked me why I had come to the border and why I had thrown stones. He wanted to know the names of my relatives and where I live. Throughout the investigation I was still only in my underwear and shivering with cold.

After about fifteen minutes, they took me out of the room and brought me a shirt and pants. As they led me out of the room I saw five other guys who had been at the demonstration at the border and had also been arrested. They were all sitting on the ground, blindfolded and handcuffed. The soldiers sat me down with them. Each one of them was interrogated, one by one.

A while later, I saw the officer leave the interrogation room. One of the soldiers came over, took my clothes off again, and switched my handcuffs to narrow plastic ones. He tied my hands behind my back and tightened the cuffs until my hands really hurt. When I cried out in pain and asked them to loosen the handcuffs a bit, one of the soldiers tightened them even more. After that, every time a soldier went by, he hit me.

Three days went by like that. I sat with the other guys outside, on the ground, and they came over to beat us whenever they felt like it. Sometimes they played music and beat us in time with the music playing in the background. When we asked them for water, they brought some and poured it over our faces. Sometimes, they played soccer around us and the kicked the ball at us.

One time, when we were so thirsty we begged them for water, a soldier who spoke Arabic came over and gave me something to drink. I thought it was water but when I drank it, it tasted bitter and I felt dizzy. I realized it was alcohol. Another time – I think it was the next day – I asked for water and they gave me alcohol again. After I tasted it and refused to drink, they poured it on me.

For three days we were subjected to relentless abuse. We shivered with cold and they poured cold water over us; they kept us from sleeping; and at some point I was hit in my left shoulder with a sharp object and I started bleeding. They wouldn’t help me. They put cigarettes out on me, on my left leg and on my right arm.

The IDF Spokesperson told Haaretz for its article: “”after the arrest of the Palestinian there were various complaints regarding the conduct towards them. When the IDF received the complaints an investigation was opened. The findings were recently sent to be examined by the MAG.”

The chances of the soldiers being convicted, or even indicted for the crimes they are accused of, however, are slim. According to data collected by Israel human rights organization Yesh Din, only 3.5 percent of investigations (8 out of 229) into soldiers committing crimes against Palestinians in 2014 resulted in an indictment. That actually represents a decrease from 2013, when 4.5 percent of investigation resulted in indictments.