Has the movement – also known as ‘the tent protest’ – abandoned its consensus-building approach, and is it ready to pursue a more confrontational agenda through more radical means? 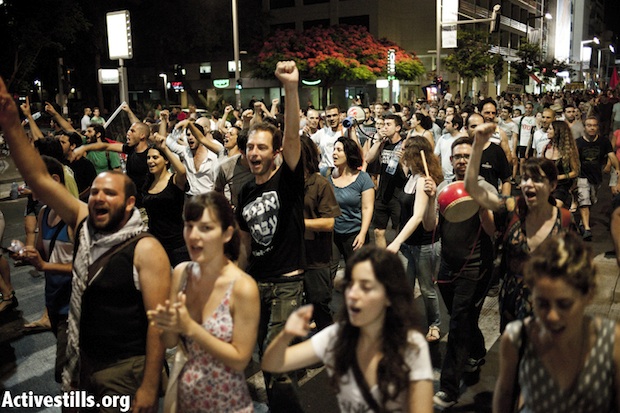 It was a different J14 protest than the ones we saw last year: less organized, and more emotional and confrontational. On Saturday night, thousands of Israelis assembled at Habima Square, and then marched on to block some of Tel Aviv’s main roads: Ibn Gavirol Street, Begin Road, and even the Ayalon highway, that crosses the city from north to south. A couple of banks had their windows smashed; 89 protesters were arrested.

>> View images and footage from Saturday’s protest in Tel Aviv >>

Police later exaggerated reports of violence by protesters, perhaps in an effort to justify the unprecedented number of arrests. Unlike in previous cases, protesters detained by police weren’t let go after a few hours, but rather were held for the night. Yesterday (Sunday), the police asked the court to extend the remands of 14 protesters on charges of assault on cops and even stone-throwing. Yet despite numerous videos taken at the protest – including by the police – there was no evidence whatsoever of such assaults, and not a single law enforcement officer was hurt (not the case for the protesters). On Sunday, various clips of police officers beating protesters emerged (like this one, be sure to check out the last few seconds). Later, a judge released all the protesters.

There is no denying that something has changed in the J14 movement. Last year’s consensus-building atmosphere was gone, replaced by a surprising level of bitterness and anger. Many protesters spoke of the need to take the political battle to the streets, now that even the government’s mild promises from last year weren’t fulfilled, and especially due to the lack of Knesset opposition. Prime Minister Netanyahu now has a coalition of 94 members of Knesset behind him, leaving a fragmented 26-MK strong opposition, which doesn’t even meet the threshold for the assembling of a special debate (which requires 40 members). Netanyahu may have secured the near future by cancelling the elections he wanted to announce, but he reignited the protest against his government.

Another interesting development is the change in the way the media treats the protest. Last year, proxies to the prime minister spoke of “media conspiracy” against him, due to what seemed like the mainstream media’s favorable treatment of J14. Things couldn’t be more different today. J14 was blamed for the economic slowdown Israel is experiencing, which sent the media market into a deep crisis. As a result – and perhaps, out of growing dislike of the protesters themselves – the media tone has changed to one that ranges between ignoring the protest and bashing it.

This is no conspiracy theory. I have heard in person from at least two employees of a couple of the largest media organizations in Israel that they were instructed not to promote news items about the protest, unless something “really exceptional” happens. The managing director of Channel 10 even said as much in public, when he ordered his employees not to “create a social protest.” The effect of the new guidelines was visible last Saturday – until the protesters blocked the city’s main highway and the bank windows were smashed, only Haaretz featured the report of the protest as its top story.

Furthermore, in the days following the demonstration and the arrests, the Israeli tabloids highlighted “the violence” of the protesters. In Yedioth, the reporter at the protest, Danny Spector, wrote today that the protesters “destroyed shops” – something that even the police didn’t say. Just as it happens so often in the West Bank, the papers didn’t bother to fact check claims of stone-throwing by protesters on cops. I was at the demo for several hours, mostly close to the area of confrontations, and all I saw were a couple of water bottles which were sprayed – not even thrown – towards the cops. Considering the Tel Aviv heat that night, I wouldn’t have mind being sprayed myself.

The caption to this pic, printed today in the daily Maariv, says it all (via 7th Eye). 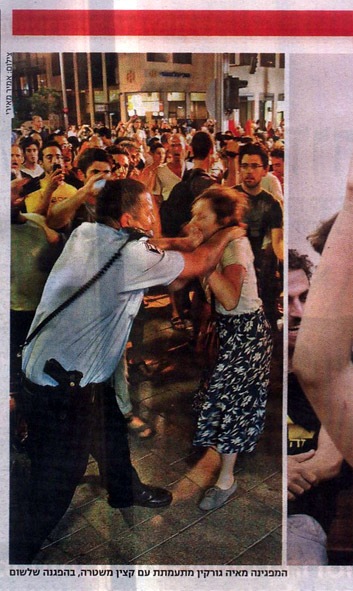 J14 is now the protest of the outsiders. With no backing from the media or major political parties, it is no longer the summer festival people claimed it was in the past. Some questions – like the debate on the need to discuss the other urgent political issues, and most notably the occupation – still haunt the movement. Yet there is renewed energy in the streets, at least in Tel Aviv.

The torrent of grassroots initiatives – generally launched on Facebook – that was the trademark of last year’s protest, is visible again. One emerging idea is a boycott of the “Tel Aviv White Night” – a culture festival organized by the municipality, which is due to take place on Thursday night. Tel Aviv Mayor Ron Huldai played a major part in reigniting the protest when he ordered city employees to make sure not a single tent is placed on Rothschild Boulevard. So far, several art galleries have decided not to extend their opening hours into the night as planned, and other events were canceled as well. If the initiative gains momentum, it could mark one of the rare moments in which the Tel Aviv cultural scene – the well-known “bubble” – comes close to taking a political stand against its immediate business interests. This is J14 at its best – a movement that can politicize people and institutions that normally benefit from the status quo and usually are only too happy to help preserve it.

After two large yet uninspiring demonstrations this spring, activism seems once more like a viable route for political change in Israel. Much will depend on the form the protest takes from now on, and on the response of the authorities. It will be hard to predict or even control the events, since the J14 movement is more fragmented than ever, with last year’s leaders split into at least four or five camps. It’s clear that more confrontations with the police will lead to a smaller, more radical protest and would make a larger political shift more difficult, at least in the short run. And there are events that could dominate the national agenda regardless of what protesters do or don’t – a war with Iran, for example. Yet for the first time since September 2011, the largest protest movement Israel has seen in decades seems very much alive.