Muhammad Abu Latifa was killed during an early morning arrest raid. Israeli security forces say he died after falling from a roof but witness accounts and blood stains seen by +972 appear to contradict that narrative. Abu Latifa was the third Palestinian to be killed in Israeli arrest raids in one week.

Text and photos by Oren Ziv/Activestills.org 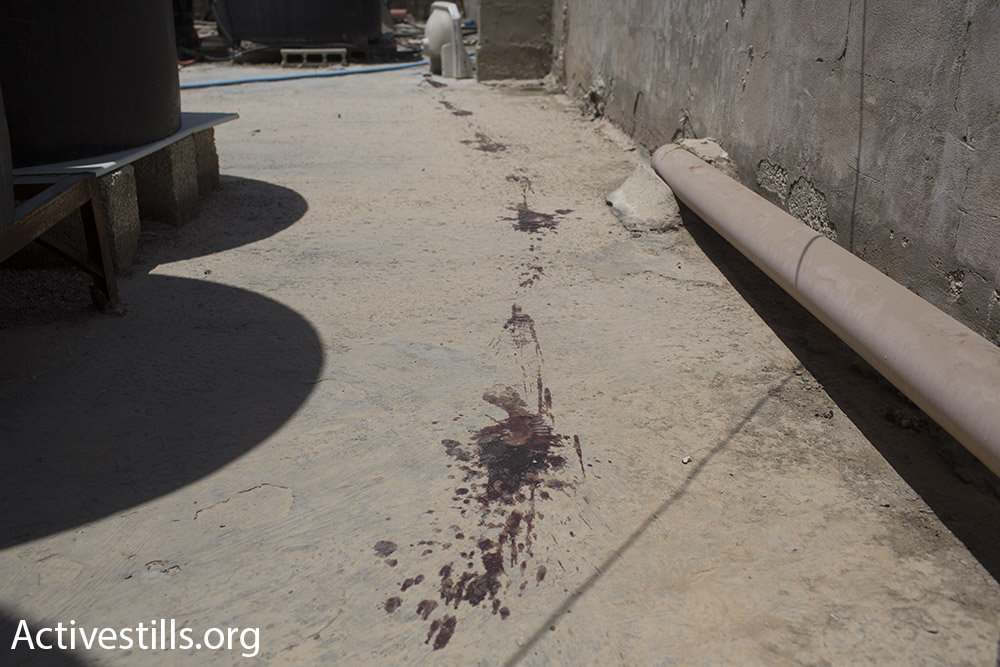 Israeli security forces shot and killed a Palestinian youth during an arrest raid in the Qalandyia Refugee Camp in the early hours of Monday morning. This was the third case in which Israeli forces killed Palestinians in the last week, all three during night raids.

Muhammad Abu Latifa, 18, was sleeping in his bed when a sizable force of Israeli soldiers and police commandos raided his house, in the center of the refugee camp, situated between Jerusalem and Ramallah. When the Israeli forces attempted to arrest him, he ran out to the balcony of his house and jumped to the roof of nearby house.

According to the official Israeli narrative, which was published in Israeli media outlets Monday morning, Abu Latifa resisted arrest and fled onto the roof, at which point the forces shot him in his lower body. According to the Israeli account, he then fell to his death while jumping to another roof. Police said Abu Latifa was wanted in connection with terrorism, an allegation that can at times refer to anything ranging from armed attacks to rock throwing.

A tour of the roof of the building next to his home exposes a compelling, conflicting narrative to that offered by police. Blood splatter on a retainer wall on the roof seems to corroborate that Abu Latifa was shot only after he already escaped from his home — while he was fleeing. 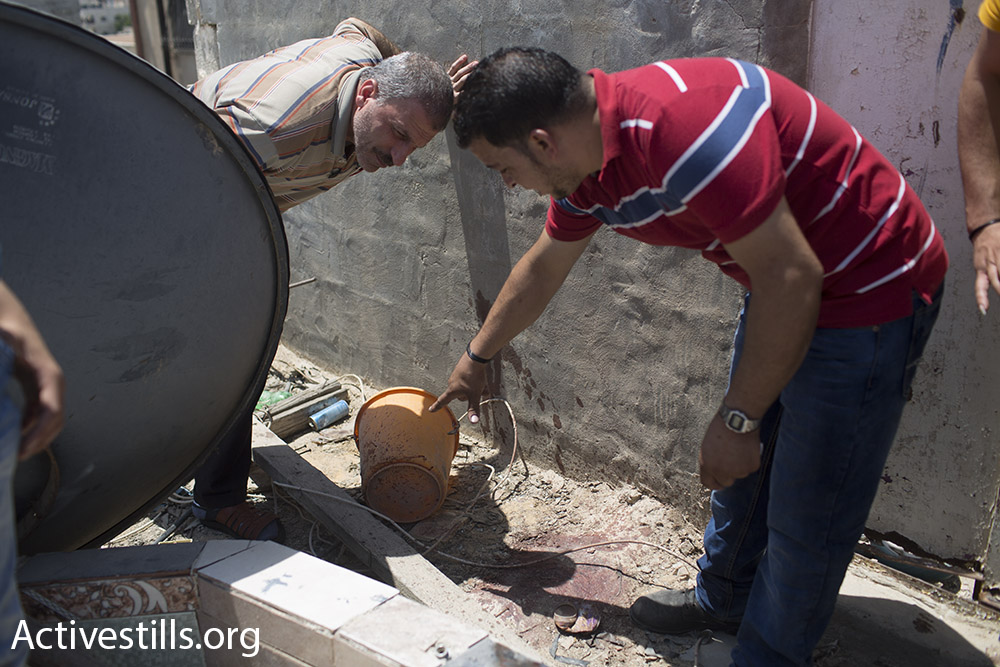 Relatives point to blood spatter on the retainer wall of the roof on which Muhammad Abu Latifa was shot during an Israeli arrest raid, Qalandiya Refugee Camp, July 27, 2015. (Oren Ziv/Activestills.org) The blood stains lead back toward the Abu Latifa home, suggesting that Israeli forces carried him back and that he did not fall.

“The army is lying, he did not fall. The blood splash on the corner shows they shot him for no reason. He could not have run away,” asserted Abu Latifa’s cousin, a woman in her 20s who asked not to be identified. The Israeli soldiers ran after him onto the roof and then shot him, she recalled.

Another neighbor who said he saw the incident from his window described what happened after the shooting. “The soldiers carried him back to the roof of his house” he said, pointing to bloody footprints leading back toward the balcony. +972 saw only imprints of a left foot, which the neighbor claimed shows Abu Latifa was carried while injured.

“The soldiers threw him [back] to the other roof,” the neighbor said, adding that the soldiers kept him there for half an hour.

The pools and drops of blood seen by +972 indicate that Abu Latifa was moved back onto his own roof after being shot. A small gap and a short height of less than two meters separate the two roofs, casting serious doubt on the security forces’ claims that he died as a result of falling. 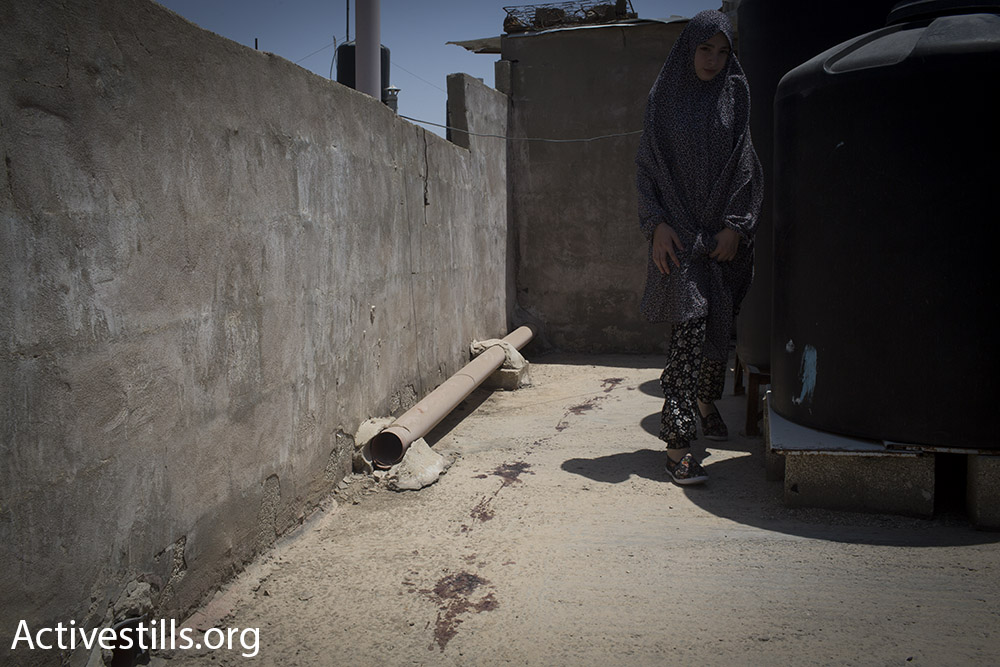 Witnesses also alleged that it took hours before the body was handed over to Palestinian medical personnel. “The raid started a bit before 6 a.m. but he was only taken away shortly before 7 a.m.,” he added. Only around 8 a.m. did Israeli forces summon a Palestinian ambulance to come collect the body.

Israeli medics reportedly declared him dead at the scene, but he was only officially pronounced dead at the Palestine Medical Complex in Ramallah.

A few hours later, thousands of men and youth gathered at the entrance of the Qalandyia camp to carry Abu Latifa’s body back to his home. Outside of the house, a woman lamented that this was the second Palestinian youth to be killed by Israeli forces in July. 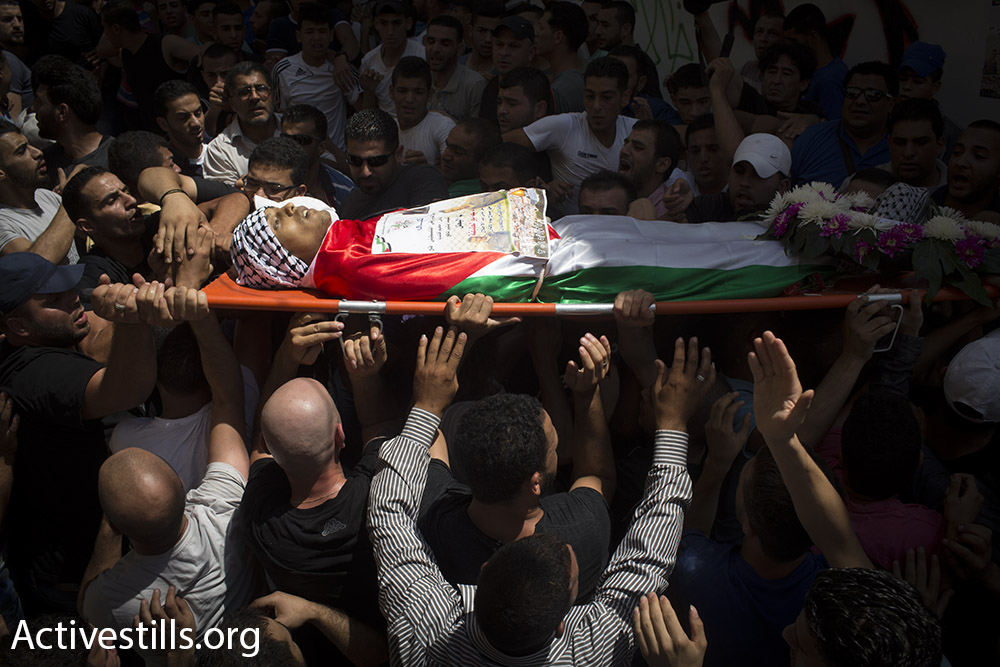 Mourners carry the body of Muhammad Abu Latifa back toward his family home, July 27, 2015. (Oren Ziv/Activestills.org) 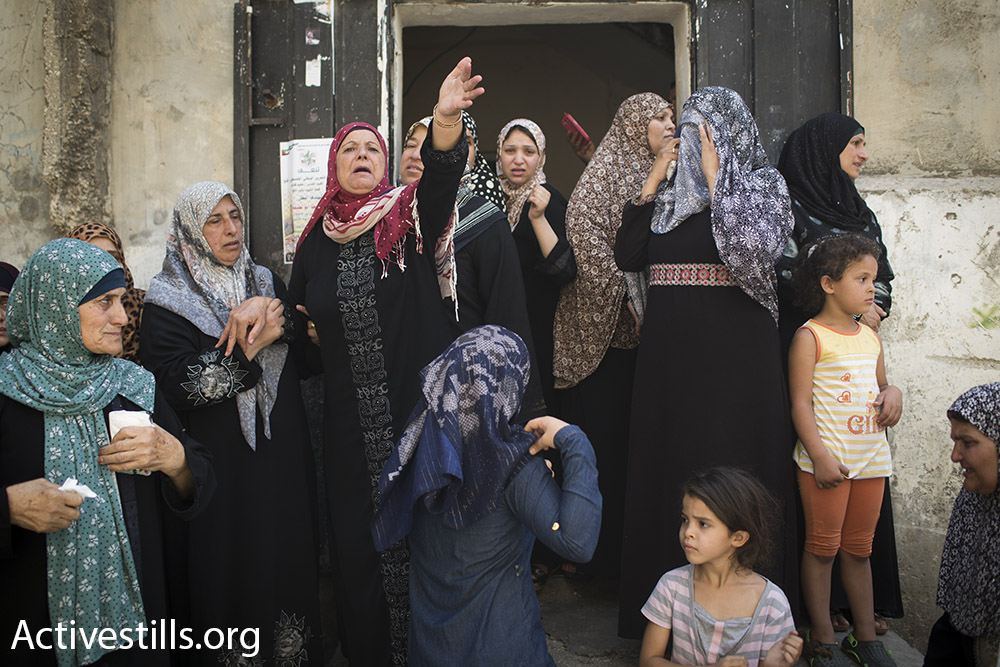 Female family members of Muhammad Abu Latifa mourn outside the family home during his funeral, July 27, 2015. (Oren Ziv/Activestills.org) Abu Latifa was shot and killed by Israeli security forces during a nighttime arrest raid.

After midday prayers, some 30 armed Palestinian militants joined the procession, shooting into the air, and escorted the body to a cemetery in the camp. 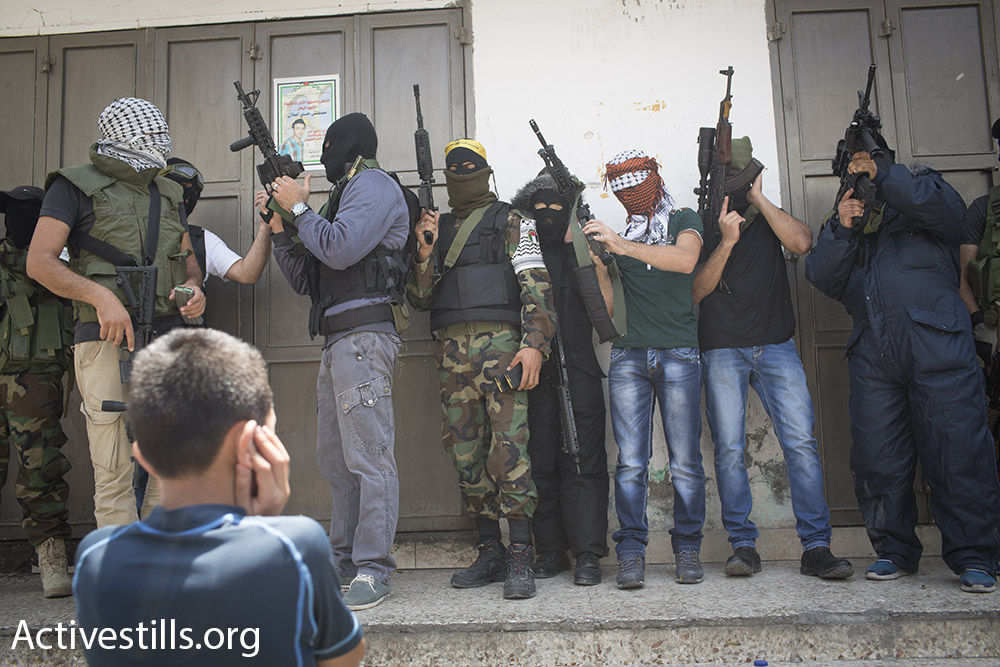 Palestinian youth watch on as militants fire their weapons into the air during the funeral of Muhammad Abu Latifa, July 27, 2015. (Oren Ziv/Activestills.org)

Abu Latifa was buried next to Muhammad Kosba, a 17-year-old who was shot and killed by an Israeli officer after he threw a single stone at his army jeep. Surveillance footage of that incident undercut the military’s narrative, showing that Kosba was fleeing — and did not pose a threat — when he was shot in his back.

Late last week, Israeli troops shot and killed 52-year-old Falah Abu Maria in his home Beit Omar, a Palestinian town near the southern West Bank city of Hebron. In that case as well, there was a great discrepancy between the official army narrative and the accounts of eyewitnesses.

The Israeli army claimed its troops shot Abu Maria while coming under a 10- to 20-minute barrage of stones, but eyewitnesses said no such thing took place. Abu Maria’s family members,who were in the house when he was shot and killed, told The Telegraph’s Robert Trait that soldiers first shot and wounded Abu Maria’s son. Out of rage, Abu Maria then threw a small potted plant toward the soldiers, not hitting them, at which point they shot and killed him.

“He picked up a small plastic flower pot and threw it at the soldiers. But it didn’t hit them. It landed on the ground,” Abu Maria’s daughter-in-law, Sara, told The Telegraph. “Then they shot him, three times… It was like an action movie.”

A day earlier, Israeli forces shot and killed a third Palestinian man, 21-year-old Muhammad Ahmad Alawneh, in clashes that broke out during a nighttime arrest raid near Jenin.