As in years past, fundamentalists in Jerusalem are attempting to incite the ultra-Orthodox against the LGBT community. Judaism, however, is not an enemy of tolerance.

The Jerusalem LGBT (lesbian, gay, bisexual and transgender) community again encountered hateful signs plastered across the city this week, as seen in the below pashkevil (Yiddish bulletin poster). We were surprised to see this once familiar relic we came to know so well from 2005 and 2006, when the city was burning with hatred. This pashkevil again quotes the same survey justifying homophobia on the basis that it is found in all three monotheistic religions. The new pashkevil refers to the Jerusalem March for Pride and Tolerance as the “Abomination March” and commands that we “leave them alone.” 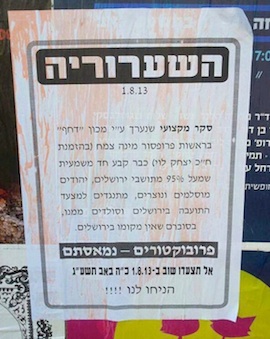 Pashkevil refering to the Jerusalem March for Pride and Tolerance as the “Abomination March.” (Photo: Aviram Zino)

On the Jewish holiday of Tishah B’Av, as we remember the destruction of the city due to baseless hatred, we are amazed to see extremists trying to reignite the fires that once burned in Jerusalem. In the more recent past, we saw the city engulfed in flames in 2005 and 2006 due to intolerance. We are terribly saddened to see that there are forces attempting again to fan those fires.

The JOH (Jerusalem Open House for Pride and Tolerance) is trying to act responsibly in the face of threats. We are reminding our community members that we will not allow the same hatred that once destroyed the city, to destroy us. The complicated social fabric of Jerusalem will not be torn apart by brotherly hatred.

Judaism is often used as an excuse to justify homophobia, racism and hatred. We believe that Judaism is not an enemy of tolerance, nor is Judaism contradictory to pluralism. Homophobia is an illness that infects all segments of Israeli society, not just the religious. We find it very troubling that extremists are using Judaism to justify their intolerance, especially on this day.

It is clear that this is not an ultra Orthodox pashkevil, as it is not written in ultra-Orthodox language and references secular statistics from a secular perspective. We believe that fundamentalists are trying to use the Orthodox communities in order to ignite the city. We call upon all those who believe in baseless love, justice, and the true meaning of Judaism to stand up for tolerance.